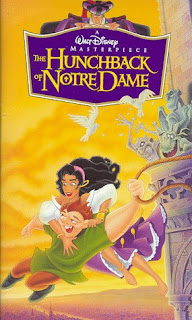 Sanctuary! Sanctuary!!  This week's Project Disney is The Hunchback of Notre Dame based off the book with the same name by Victor Hugo.   This time I had a lot of fun with Project Disney.  I hadn't read the book or seen the movie in a long time so it was all new to me.  I watched the movie on a VCR tape!!  We have all the Disney movies on VCR tapes (until they stopped making them) and so I thought.. why not?   Here are all our VCR tapes: 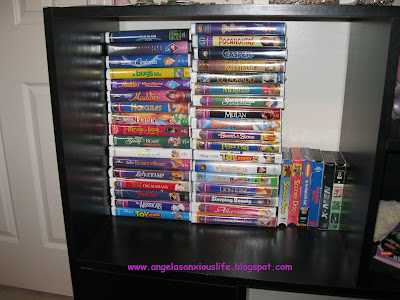 This movie is obviously completely different then the book.  There is no way that the movie could've been faithful to the book since it is a movie for kids.  Quasimodo is not deaf in the movie like he is in the book, he speaks more in the movie, and of course he has 3 gargoyles who are his mentors. They are supposed to also add some comedy to the movie but I really didn't find this Disney movie that funny.  Though sometimes the goat Djali was funny.  In the book, the priest Frollo falls in love with our main character Esmeralda and we know about it.  I felt in the Disney movie we never figured it out until all of a sudden she was going to die and the Frollo tells her to chose death or him.  I was like WHA?????  Plus I must admit I kept having issues with the voice of Esmeralda.  I am not sure what it was.. annoying?  Not really a girly pretty voice?  Something I couldn't put my finger on and then I looked it up and saw she is voiced by Demi Moore.  And then I was like ... hummmm.... 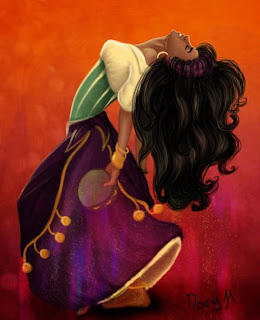 And then of course this movie does not end like the tragic book.  The Disney film seems to end when Quasimodo grabs Esmeralda and yells "Sanctuary"! But in the book that is only about a little past the middle.  The book everyone's story ends poorly (and if you don't want the book to be spoiled stop reading this part).  Everyone DIES!  Quasimodo realizes that Esmeralda has been hung and then goes and finds her body and lays with her and just dies with her.  Phoebus who is the hero and love interest in the movie really only uses Esmeralda for sex in the book and is some sort of hero in the movie.  He is a total bad guy. 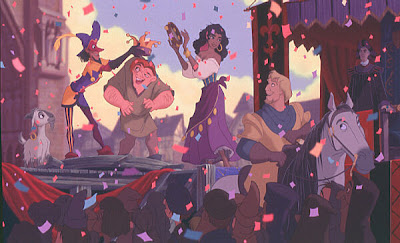 While watching the Hunchback and doing research on it I discovered that there is The Hunchback of Notre Dame 2!  I can't believe it either.  I mean umm... this is the description about the film: Now that Frollo is gone, Quasimodo rings the bell with the help of his new friend and Esmeralda's and Phoebus' little son, Zephyr. But when Quasi stops by a traveling circus owned by evil magician Sarousch, he falls for Madellaine, Sarouch's assistant. But greedy Sarousch forces Madellaine to help him steal the Cathedral's most famous bell.
I find this so hard to believe because of how the book ends.  But now I am on a mission to see this second film! 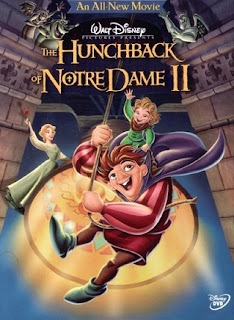 Well one thing I can say about this movie is I love the music.  I really think it has some great songs.  I love the time period the movie takes place in, I love all the dancing and the pretty colors.  I have actually been wanting to re-watch this movie forever and am glad I did.  I plan on ordering it on blu-ray.  The book was amazing too and I am so glad I finally read it.
Oh and I always add the evil Disney princess pictures since I love them so much.. here is the one of Esmerelda: 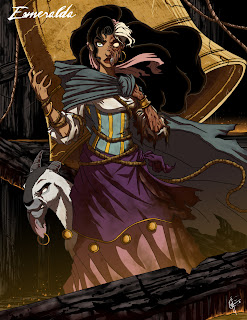 Edit.. here is what I think is an Annie Leibovitz picture of Angelina Jolie.  It looks like Esmerelda for the Notre Dame Disney movie but I can't find confirmation anywhere that this picture is for that.  I wanted to post it here anyways because it looks like it is: 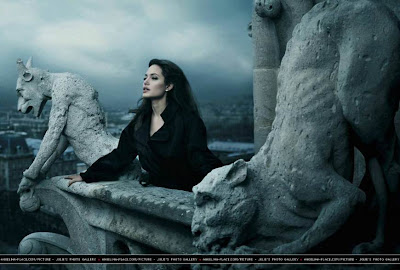 Here is my review on The Hunchback of Notre Dame
Be sure to check out my other PROJECT DISNEY:
Snow White
Cinderella
Peter Pan
Treasure Planet
Sleeping Beauty
The Great Mouse Detective
The Princess and the Frog
Pinocchio
Fantasia
Lady and the Tramp
Alice in Wonderland
The Rescuers
The Rescuers Down Under
Tangled
Oliver and Company
Mulan
The Little Mermaid
Bambi
101 Dalmatians
Frozen
Fantasia 2000
The Jungle Book
The Emperor's New Groove
The Sword in the Stone
Aladdin
Atlantis
The Aristocats
The Lion King
The Many Adventures of Winnie the Pooh
Winnie the Pooh (2011)
Robin Hood
Hercules
Pocahontas
Dumbo
The Black Cauldron
Mary Poppins
Lilo and Stitch
The Adventures of Ichabod and Mr. Toad
Make Mine Music
Tarzan
Fox and the Hound
Melody Time
Posted by Angela's Anxious Life at Friday, May 03, 2013