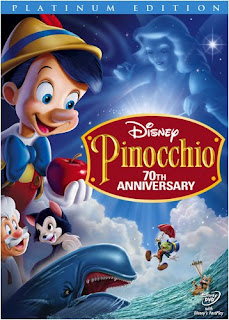 "And always let your conscious be your guide!"  This week we are exploring Pinocchio the movie based off of The Adventures of Pinocchio by Carlo Collodi .  I love Pinocchio.  This movie has some of the greatest sidekick characters of all the Disney movies to me.  We have the beautiful Blue Fairy, Jiminy Cricket, Gepetto, Cleo and of course Figaro!

The movie has some great classic Disney songs.  I watched this movie often as a child... and the donkey part always scared me.  I watched it again today and it is still a little freaky.  Pinocchio goes off to this island for kids and is turned into a donkey.  During this scene Pinocchio is smoking a cigar so on the DVD at the beginning there is an commercial message warning people about the danger of smoking.  I thought this was really showing the age of this film.


I finished the The Adventures of Pinocchio by Carlo Collodi , wow is this book different then the movie!  Pinocchio never seems to want to be a real boy... all of a sudden at the end of the book is made a real boy because he becomes brave and good. There is a Blue Fairy in the book but when we first meet her she wants to be his sister, and then later she wants to be his mother.  There is a cricket in the story too... but at the beginning of the book Pinocchio smashes it against the wall!  Later we meet the cricket as a ghost and then again as alive.  Confusing?  Yes it is.  Gepetto is Pinocchio's dad but we don't really see much of him in the book.  He goes off looking for Pinocchio and then we meet him again at the very end when Pinocchio finds him inside a shark (instead of a whale). 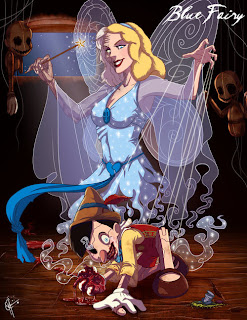 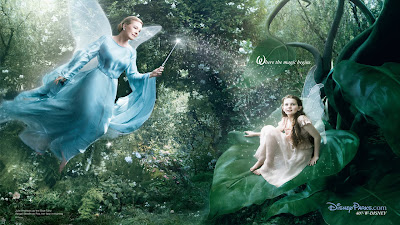 This is another photo above that I have been showing in my Project Disney of Anne Leibovitz's Disney series.  This one is of the Blue Fairy and a Fairy in training.  I am surprised Disney made a movie based off the book by Collodi.  The book didn't really seem like a sweet children's story, though it didn't have a lot of lessons for kids.

Be sure to check out my other Project Disney posts!!
PROJECT DISNEY:
Snow White
Cinderella
Peter Pan
Treasure Planet
Sleeping Beauty
The Great Mouse Detective
The Hunchback of Notre Dame
The Princess and the Frog
Fantasia
Beauty and the Beast
Lady and the Tramp
Alice in Wonderland
The Rescuers
The Rescuers Down Under
Tangled
Oliver and Company
Mulan
The Little Mermaid
Bambi
101 Dalmatians
Frozen
Fantasia 2000
The Jungle Book
The Emperor's New Groove
The Sword in the Stone
Aladdin
Atlantis
The Aristocats
The Lion King
The Many Adventures of Winnie the Pooh
Winnie the Pooh (2011)

Lilo and Stitch
The Adventures of Ichabod and Mr. Toad
Make Mine Music
Tarzan
Fox and the Hound
Melody Time
Posted by Angela's Anxious Life at Thursday, May 30, 2013