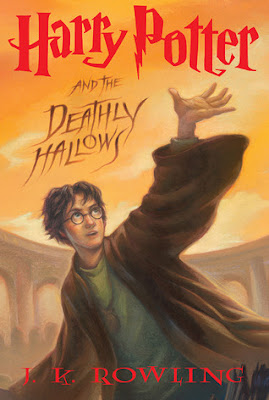 Harry Potter and the Deathly Hallows

Yeah!!  I finished my re-read of the Harry Potter books!!  This is only the second time I have read Deathly Hallows.  Here is the goodreads description:

'His hand closed automatically around the fake Horcrux, but in spite of everything, in spite of the dark and twisting path he saw stretching ahead for himself, in spite of the final meeting with Voldemort he knew must come, whether in a month, in a year, or in ten, he felt his heart lift at the thought that there was still one last golden day of peace left to enjoy with Ron and Hermione.' With these words "Harry Potter and the Half-Blood Prince" draws to a close. And here, in this seventh and final book, Harry discovers what fate truly has in store for him as he inexorably makes his way to that final meeting with Voldemort. In this thrilling climax to the phenomenally bestselling series, J.K. Rowling will reveal all to her eagerly waiting readers.

This book took me like three weeks to complete. I must admit it my least favorite Potter book. I just don't like all the camping. It is also my least favorite movies. The book picks up big time at the end but the beginning I am just like eh. I think one of my problems is that the innocence and youth is gone too. None of the book really takes place in Hogwarts. Though of course I love Snape in this book. His story is wonderful. His love for Lily is a love we all want. There is so much death and destruction in this book all the way till the end. Yeesh. I love though that we see Draco's family as a real family. Draco's mom loves him just as much as Lily loved Harry. We don't really think of it that way because they chose the dark side. This book though is really long to me and just keeps stretching out. 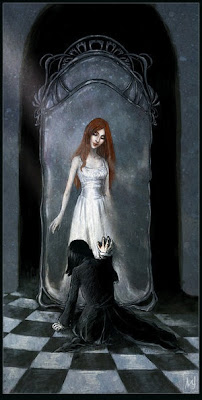 Sometimes in this book as I would read along I read the lines in the voices from the movie.  I liked that Kreature finally finds some loyalty to Harry.  He turns out to be a really good elf after all.  There were of course a few things I didn't remember.  Like that when they were in the vault looking for the cup that all the treasure in there was burning them!  Centaurs, house elf, spiders, all join the mix of fighting in the book.  Wish we could've seen that in the movie.

I have no idea when I will re-read this series.  Probably not for another 5 years or so.  I had fun reading it!!!  Just great books to read.