Oh man... after going to the big San Diego Comic Con last year and then to the Denver Comic Con this year it was such a disappointment.  Not the atmosphere.  That is always fun.. costumes and geeky people everywhere.  But the Con itself was nuts. 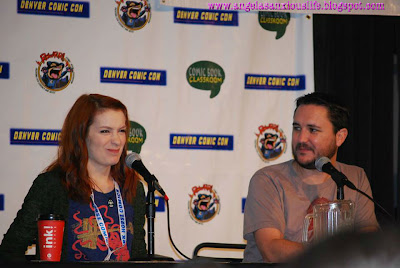 Day 1 They had everyone going through the same small doors in the convention center not utilizing all the doors.  So it turned out on the first day 6000 people were issued refunds.   We didn't realize you had to get some sort of special magic wrist bands in order to see George Takai and William Shatner.  So we hurried in the building Saturday and ran to line up for Takai.  Then someone in line informed us that in the line to get in the building apparently you were handed these bands.  OK so we go look for them to find out they were handed to the first people in line that morning.  Ok... so we head over to the overflow room to watch him speak.  We get to those doors only to find out that they aren't going to broadcast it after all.  OOKKKKK..... Then we were going to enter the Halo challenge that day and that was a mess.  We go in to sign up at the time we were supposed and everyone is so busy we have to stand there for 15 minutes.  The the person running it was so power hungry we never bothered to go back. 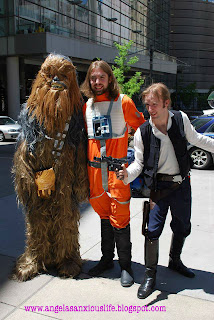 We tried to get in line for a few things and were shuffled off by the security and told to come back 15 minutes before the panels.  They kept trying to make us go upstairs to the exhibit hall.  The worst day for this was the Wil Wheaton and Felica Day panels.  The security kept telling everyone to move and that we had better things to do with our time.  Um... we did buy the tickets and if we chose to stand in line so what?  You would think this con would've sent someone out to San Diego and see how things are done. Geeks stand in LINES.  It's what we do.  Needless to say no one moved and we became the unofficial line for the line to Wheaton.  Whenever people walked up we told them we were just a gathering of nerds... not a line.  And then when the line to the panel before Wheaton moved we just moved our line into that line.  Which now had like 100 people in it by the way, if not more people.
The costume contest wasn't all that great either.  First they were half an hour late starting.  Then the sound was out so we waited another 15 minutes.  And then the lights even went out!  Shockingly, we were allowed to stand in line for that. 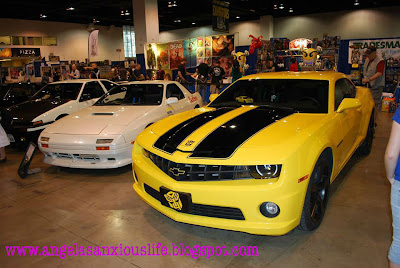 Ok sooo I know I keep talking about bad stuff... I guess I should say some good things.  I thought that the building was perfect for the crowd.  The exhibit floor gets crowded but it did at San Diego too.  There isn't anything you can do about that.  I met a lot of fun people in lines.  Seeing costumes everywhere was super fun.  Lots of plugs at this convention center.  Great for charging up phones/iPads and whatnot.  Parking was really great!  Yes most garages were $10 but there was plenty.  We just parked at our hotel and walked over.   I got to see Wil Weaton, Felica Day, Wil Shatner (from the overflow room),  and Nelsan Ellis (Lafayette on True Blood). Stan Lee was supposed to be there but canceled at the last minute... which is why Shatner was there instead. 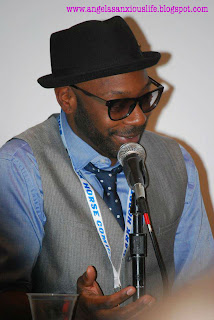 We probably won't go back for a couple of years and let the Denver Comic con get rid of the kinks.  But it was a lot of fun and for those who can't travel to San Diego it is a perfect gathering of geeks.  Or we might go back sooner if they get another big name in there.

I mean... who doesn't like seeing Darth Vader strolling around downtown??? 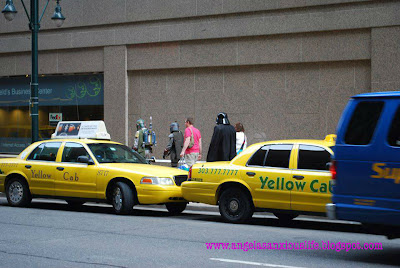 Are you going to any cons this year? 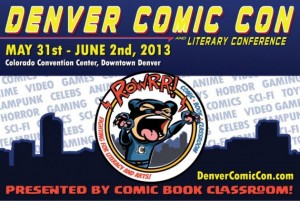