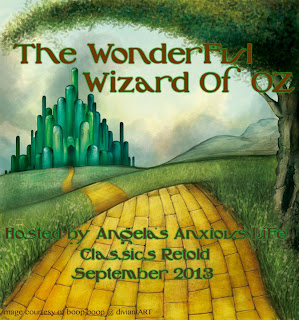 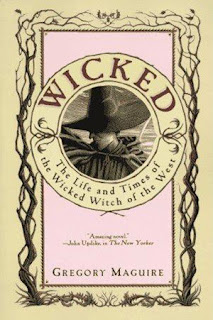 This month is Wizard of Oz month here at the blog.. where I read the original and then also read the retellings.  So of course you know I would be reviewing Wicked right?  Let's start off with... I didn't love Wicked.  That's right!

So let's check out the goodreads description:

In Baum's land of Oz, animals talk and strive to be treated like first-class citizens, Munchkinlanders seek the comfort of middle-class stability and the Tin Man becomes a victim of domestic violence. Green-skinned Elphaba, future Wicked Witch of the West, is smart, prickly and misunderstood; she challenges our preconceived notions about the nature of good and evil..

So I wanted to love this book. But I didn't. I do love that Elphaba (the Wicked Witch of the West) was actually good. She has a mysterious birth... which tries to explain why she is born green. Of course she faces a lot of prejudice because of this.  Eventually she goes off to college (yes I skipped a lot of the plot line).  At college she rooms with a beautiful girl name Glinda.  Glinda studies Sorcery and Elphaba studies Animal Science.  Animals can speak and are educated but they are mysteriously becoming unable to speak or have any intelligence.

Elphaba heads to the Emerald City to see the Wizard to discover what he thinks of the animals.  She finds no one cares about what she thinks.  So she hides in the Emerald City trying to fight for her cause.  She finally leaves the city and goes and eventually returns to Munchkinland where she was born so meet back up with her sister (Wicked Witch of the East).  This is where she gets the name Wicked Witch of the West from the Munchkins because of her beliefs.

The book now follows what Baum wrote about in the original book.  A house falls onto the Wicked Witch of the East.  Glinda finds out and goes to the scene where she gives Dorothy the silver slippers because she murdered the Wicked Witch of the East.  Elphaba is very upset because the slippers were rightfully hers.  By this time the Wizard has sent Dorothy to kill Elphaba.  Dorothy tells Elphaba this but Elphaba is still angry and accidentally sets her self on fire with her broom. Dorothy throws water on her which Elphaba happens to be allergic to.

So I hoped I described this story goof for you.  Honestly this book has a lot of stuff going on.  I like the parts of the books that have to do with Oz.  The new story of who the Wicked Witch of the West really is and why she ends up bitter with her life.  On the other hand this story is stuffed with lots of political themes and well lots of lessons for us all to learn.   That is the part of the book I just don't enjoy.
Wicked is the first in "The Wicked Years" series, and was followed by Son of a Witch (published in September 2005), A Lion Among Men (published in October 2008), and Out of Oz (published in November 2011).  I have not read the other books in the series.


Rain is pouring...  Not sure if this was really worth my time, must get umbrella.
Posted by Angela's Anxious Life at Thursday, September 19, 2013