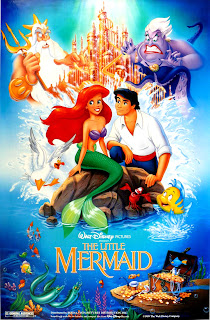 This week's Project Disney is The Little Mermaid!  This is a great Disney movie.  One I have always enjoyed.  The movie is based off the story by Hans Christian Anderson.  This tale of course is dark compared to the Disney novel. In the book, the Little Mermaid goes to the surface of the ocean when she turns 15.  She sees a prince on a ship and loves him instantly.  His ship wrecks and she takes him to land to save him.  A covenant is near the location where she takes him and the women there take him in.  The Little Mermaid figures out where the prince lives and eventually goes to the sea witch to help her get to the surface. The witch agrees but takes the Little Mermaid's tongue so that she can have her voice. The Little Mermaid's tail is split into legs (very painfully) and whenever she walks on those legs it feels like walking on knifes. The prince never falls in love with her and loves one of the women (a princess) who was at the covenant.  The Little Mermaid goes to their wedding and then falls into the sea to become foam. Where she becomes a daughter of the air... who goes around blowing good air for people who need it.

In the movie we have fun Ariel who travels to the surface often.  Collecting items from the human world she finds in ship wrecks.  She is wanting to just grow up in the movie.. and thinks that her dad is too controlling.  She sees a ship and goes to explore seeing fireworks and dancing.  Her is the first time she sees the Prince Eric. Eric's ship is turned over by a storm and Ariel saves Eric (similar to the story by Anderson).  With the help of her sidekicks Flounder and Sebastien, Ariel then tries to figure out a way to get to the surface world.

This part of the movie has Ariel going to the sea witch Ursula.  One of the best Disney villains!  Ursula instead of stealing Ariel's tongue, just steals her voice. Ariel will get her voice back IF she can get Eric to love her (in the book she will die if she can't get the prince to love her).  Ariel gets her legs while in the water so her little sidekicks have to help her get to the surface.  I really love Ariel... I think she is a fun character.   Ariel then goes to the surface where she learns to walk, and eat like a human.  She must convince Eric to love her... but Ursula changes into a human and bewitches him into loving her instead.

The sea witch Ursula had Ariel's voice capture in a necklace that she drops when a scuffle breaks out on Eric's wedding day with her.  This allows Ariel to talk again and Eric discovers who she is and Ursula's spell on him is broken. There is a big battle with Ursula and Ariel's dad Triton in the sea.  Eventually good wins out and Ariel stays a human and marries Eric.  True love!

This is one of those Disney films that I really love the music.  Great great songs.  To compare the movie and book there really aren't a lot of big similarities.  Both mermaids have sisters, there is a witch, and a dad.... but the main story is sad and very different.  I loved both. 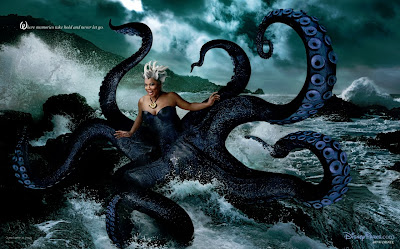 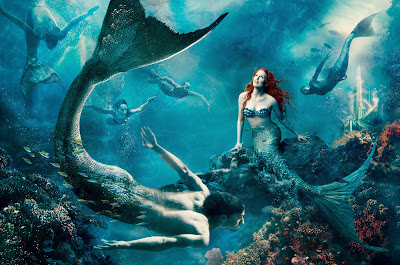 Have you read the original story?   What do you think???

Check out my other project disney:
Snow White
Cinderella
Peter Pan
Treasure Planet
Sleeping Beauty
The Great Mouse Detective
The Hunchback of Notre Dame
The Princess and the Frog
Pinocchio
Fantasia
Beauty and the Beast
Lady and the Tramp
Alice in Wonderland
The Rescuers
The Rescuers Down Under
Tangled
Oliver and Company
Mulan
Bambi
101 Dalmatians
Frozen
Fantasia 2000
The Jungle Book
The Emperor's New Groove
The Sword in the Stone
Aladdin
Atlantis
The Aristocats
The Lion King
The Many Adventures of Winnie the Pooh
Winnie the Pooh (2011)
Robin Hood
Hercules
Pocahontas
Dumbo
The Black Cauldron
Mary Poppins
Lilo and Stitch
The Adventures of Ichabod and Mr. Toad
Make Mine Music
Tarzan
Fox and the Hound
Melody Time
Posted by Angela's Anxious Life at Friday, October 18, 2013