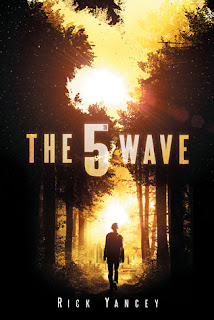 The 5th Wave by Rick Yancey

I have been kind of in a reading slump.  Reading a lot of graphic novels and putting books aside.  This month in my Young Adult Book Club we are reading The 5th Wave by Rick Yancey.. so I forced myself to start this book so I could participate and I wasn't disappointed.  Here is the goodreads description:

After the 1st wave, only darkness remains. After the 2nd, only the lucky escape. And after the 3rd, only the unlucky survive. After the 4th wave, only one rule applies: trust no one. Now, it’s the dawn of the 5th wave, and on a lonely stretch of highway, Cassie runs from Them. The beings who only look human, who roam the countryside killing anyone they see. Who have scattered Earth’s last survivors. To stay alone is to stay alive, Cassie believes, until she meets Evan Walker. Beguiling and mysterious, Evan Walker may be Cassie’s only hope for rescuing her brother—or even saving herself. But Cassie must choose: between trust and despair, between defiance and surrender, between life and death. To give up or to get up.

Lately I haven't really read any Science Fiction so I was excited to discover this was in that genre. I was happy to read about Aliens instead of vampires and fantasy. I like that this book had several POVS.  Ever since reading Legend by Marie Lu I have been excited to read books with different POVs.  I noticed a lot of reviews saying they didn't like this .. and found it hard to follow who was talking in the POV but I didn't have a problem (plus I read that in the audio book the POVs have different voices to help out with this).

I will admit there was a point there where Cassie and Evan got a little too much screen time. There little going back and forth back and forth was too much. I know it was for the romance int he book but come on.. too much! After this I thought the book got back on track. The romance section in the book just made the book stop in it's tracks!!! I will say... I am a little annoyed about the possible love triangle that might happen. It might even be a four person love mess! Hoping that doesn't really happen. 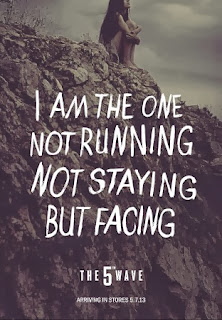 For those that have read it (spoilers to come) Personally I enjoyed trying to figure out what the 5th wave would be. I wonder.. will there be more waves? Wouldn't it be something if this was a book that actually has a sad ending... like the human race doesn't win. I suspect though the series will end with us both co-existing. I think the waves are a smart way to take over the human race. The aliens are trying to keep as much of the planet in tact and don't want us destroying it to destroy them... so I think they are trying to invade quietly.

I think it might be hard to cohabit with humans because the Others could never really reveal who they are... the humans would probably get mad that they have taken over their family members body. Evan is technically both human and the alien... but the alien is really now speaking and making the decisions. It would be hard for me at least to accept this.

I have no idea how I would've acted during the 12 days the alien spaceship was above the earth. That was one of my favorite parts of the book. Reading the descriptions of the news reports and how people were reacting. Some going on with their lives... some going to Disney, some panicking. The wave that bothered me the most was the one with the virus. It would be so hard seeing all the people in the world just dying and there was nothing you could do. A terrible painful death too.

I am excited about the movie coming out... the 5th Wave Movie website  is pretty cool.  You should check it out if you haven't yet. 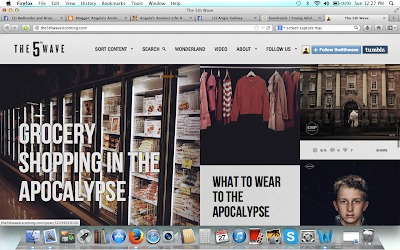 I look forward to reading the second book, The Infinite Sea.  It would seem to me that either people liked this book a lot.. or didn't really like it at all.  What did you think???

Clouds are covering! A read that lets me down every now and then but peaks out of the clouds!
Posted by Angela's Anxious Life at Sunday, October 27, 2013