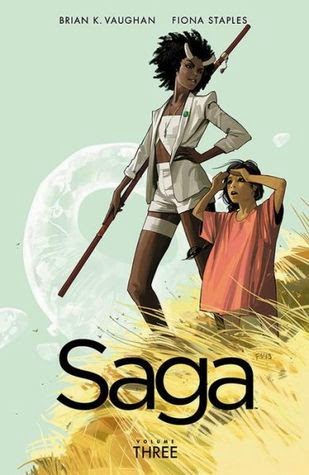 Saga Volume 3 by Brian Vaughn and Fiona Staples wasn't my favorite volume in the series.  I really have loved this unique story told by the daughter of our two main characters Marko and Alana.  The couples are still hiding out .. this time at an author's house.  The assasins who are trying to kill them still have their own stories carrying on too.  What is great about this comic is that for some reason as a reader I just want to know what happens to these characters and why the daughter is even telling their story. The art is just as amazing too.  I did see that the volumes seem to come out once a year (at the end of the year) so I just put volume 4 on hold at the library.  It seems like I will have to wait till Dec 2015 for volume 5!!! WOW  4 out of 5 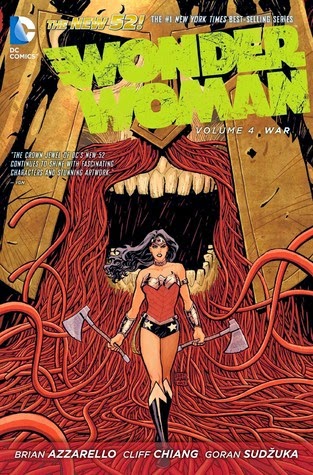 Next up we have Wonder Woman Vol 4 War DC which I received for free from Edelweiss for an honest review. I have really loved the Wonder Woman series. I love all the mythology involved.  It took me a little while to get used to the artwork but now I like it.  Wonder Woman becomes the God of War in this issue so I can't wait to see where she goes with that in the future. I love that Wonder Woman goes full demi-god in this comic too.  We get to see her ... without her gauntlets ! I just hope this book never get the Justice League crossover somehow and Wonder Woman ends up with Superman.. NOOOOOOO!!!  4 out of 5 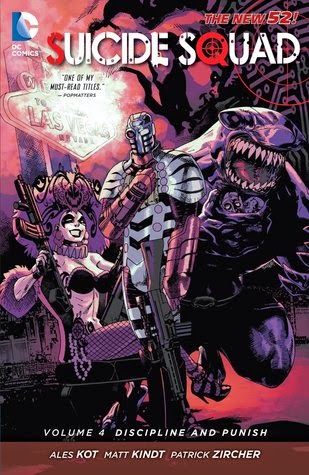 I have really been enjoying Suicide Squad!  This issue (Volume 4 Discipline and Punish) confused me a little though.  I just really didn't get where it was going.  Though it has high ratings on goodreads I felt it was all over the place.  All of a sudden we get to see James Gordon join the Suicide Squad (who we meet in the Batgirl comics so you kind of need to read those to know who he is in the new 52).  He is in love with Amanda Waller and doing some sort of mission for her.  The comic presents Harley Quinn's back story as well as Deathshot's.  Cheetah just pops in too... out of no where.   I just felt the issue was all over the place and didn't really follow a cohesive story. Of course this comic has a new writer from the other three volumes... so that always changes things. The story is also missing some of my favorite characters from the other three volumes.   Just left out.  3 of out of 5 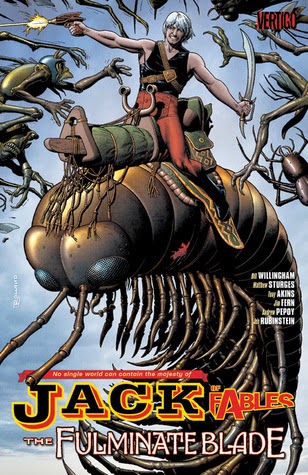 Last in this issue we talk about Jack of Fables volume 8 the Fulminate Blade.  Disappointment!!  Ughhh  I don't know why I keep reading Jack of Fables.  We were totally reading about Jack Frost... who has nothing to do with the Jack that the comic series originally started with.  We are following Jack Front to some other world where he fight a lot of robotic fiends. Babe the Ox is out there like normal... talking about God only knows what.  I don't want to read the next volume but I mean it is the LAST volume, so how can I not?? Look people avoid the Jack of Fables series.  Stay tuned for my next issue of Comic Adventures when I dish how much I can stand volume 9... no one this series gets canceled in that one. 1 out of 5


This counts for 4 comics towards my 2015 Graphic Novels Challenge!!