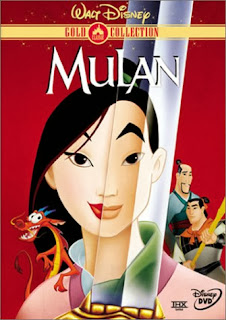 This week's Project Disney is Mulan based off of a Legend from medieval China.  It is actually hard to find the original story.  People think the original story was a poem about a girl who was tired of weaving so she went to war instead of her father, they won so she came home.  The next best book to compare to the movie to is actually a play called The Female Mulan Joins the Army in Place of her Father, by Xu Wei.  The message behind the play is that men and women are equals. 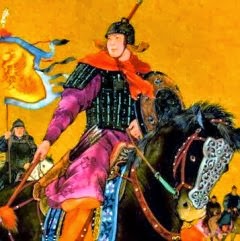 I love love this movie.  So to discover that the story has such rich roots really surprised me!! I was only able to find a couple of books based off the legend and they are actually children's books.  I read Legend of Mu Lan by Jiang Wei which was really similar to the Disney version. I also read Fa Mulan by Robert San Souci, which has amazing art.  That one is based off the play by Xu Wei.

Mulan is a wonderful character in the Disney version.  I just love when she goes to town to meet the matchmaker!  I just love the song "You'll Bring Honor to Us All".   In the Wei version Mulan already knows karate and sword fighting where in the movie she goes off with the boys and learns how to be a solider. It would seem in the film that Mulan is a failure before she sets off and in the story she is already a strong woman.  She surprises her family in the Disney film by leaving and joining in the army.  In the legend her father knows what she is planning to do.   One of the best songs in the film happen while Mulan is training..


Disney's version has the evil Shan Yu as the bad guy.  He comes from outside China and wants to rule.. while in Xu Wei's version the invading army comes from inside China in a rebellion form. There are some great side kicks in this film!!  I just love them... there is Musha.  A Chinese dragon that is Mulan's ancestor who comes back to protect her. There is also a little cricket that is just soooooo cute! 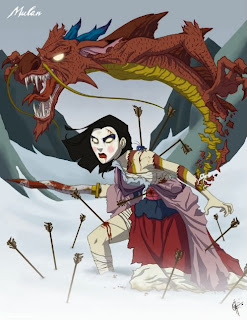 Now in the movie we have huge battles.  Mulan must show that she is a real solider.  She ends up covering up the Hu army with a huge avalanche.  Thus proving who she is (since Disney can't really show battles).  I love the hunk guy Captain Li Shang .. he walks around a lot of the time in the film with no shirt.  Yeah I said it. And of course she has some great side kicks...Ling, Yao, and Po!

Eventually in the movie Mulan gets hurt and is found out to be a female.  In the Legend she isn't found out until the war is over and she goes home to her family where she changes cloths and the soldiers who helped her get home see her.  Mulan faces off with Shan Yu in the film and eventually with the help of all her sidekicks defeats him.  China's emperor congratulates her and she goes home to her family.  The hot guy.. oh I mean Captain Li followers her there and lets her know he likes her!!!

This is one of my ALL TIME favorite Disney movies.  I think the story is great, the music is great, the humor is fun.  I laugh out loud every time I watch.  Sometimes I even quote the movie in conversation.   Just perfect.  I even sought out Mulan when I went to Disney World a few years ago and took a picture with her.

Edit:  I have also decided to go through and watch all the sequels to the Disney movies.  Mulan II is awful.  You can tell all the voice actors have changed.  This one is about... Mulan and Captain Li going to escort the Captain's sisters to get married.  They are also getting married in this film. The whole gang is back.  Mushu wants to stop them from getting married because if they do get married he will be fired.  Honestly this is only OK... it's no wonder I haven't seen it before.

Be sure to check out my other Project Disney!
Snow White
Cinderella
Peter Pan
Treasure Planet
Sleeping Beauty
The Great Mouse Detective
The Hunchback of Notre Dame
The Princess and the Frog
Pinocchio
Fantasia
Beauty and the Beast
Lady and the Tramp
Alice in Wonderland
The Rescuers
The Rescuers Down Under
Tangled
Oliver and Company

The Little Mermaid
Bambi
101 Dalmatians
Frozen
Fantasia 2000
The Jungle Book
The Emperor's New Groove
The Sword in the Stone
Aladdin
Atlantis
The Aristocats
The Lion King
The Many Adventures of Winnie the Pooh
Winnie the Pooh (2011)
Robin Hood
Hercules
Pocahontas
Dumbo
The Black Cauldron
Mary Poppins
Lilo and Stitch
The Adventures of Ichabod and Mr. Toad
Make Mine Music
Tarzan
Fox and the Hound
Melody Time
Posted by Angela's Anxious Life at Saturday, October 05, 2013