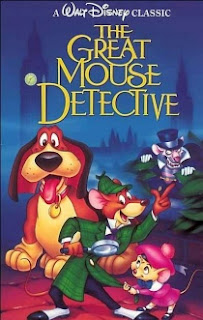 The Game's Afoot!! This week we get to talk about The Great Mouse Detective based off the book Basil of Baker Street by Eve Titus.  I am surprised that this movie isn't more popular right now and that Disney hasn't advertised it a little more with the popularity of Sherlock Holmes right now. The movie was released in 1986, and isn't one of the more popular movies.  The animation is dated but it is back on Netflix right now so if you want to see what it is all about be sure to watch it on there. 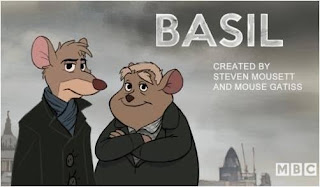 Unfortunately I wasn't able to read Basil of Baker Street before this post.  Turns out the book is out of print.  I am trying to get it from the Inter-library Loan from the library so I am waiting patiently to read it.  So this week's post will mainly be about the movie thought I was able to read this synopsis of the story.   I love Basil. He is a great spin on Sherlock Holmes!  Basil knows everything... science, math, disguise! In the movie Basil plays the violin well, but in the book he is no good at it so he plays the flute.  Of course there is a great villain named Professor Ratigan. A young mouse Olivia comes to find Basil to search for her father whom Ratigan has stolen away. (In the book it is parents who go to find Basil because their twin children are missing).  How can you have a Sherlock story without a Watson? Well it just so happens there is a mouse similar to Watson named Dr. Dawson. 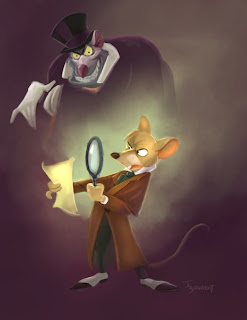 Some things in this story you don't see anymore in any film for kids is the smoking.  Basil smokes in a bar.. and there are others in the bar smoking too.  I suppose my generation didn't even think twice about this.  But nowadays people might be offended for their kids to see this. Also.. I love that Basil and all the mice live in the same house as Sherlock Holmes and use his dog to help them out!! They have a mini city under Sherlock's house. Another interesting fact is that the voice we hear of Sherlock Holmes in the Great Mouse detective is clips taken from the original films voiced by Basil Rathbone.  You only see glimpses of Sherlock in the film.. including him playing a violin at the end of the film! In the book.. Basil and Dawson are the only ones allowed in Sherlock's house as a rule. 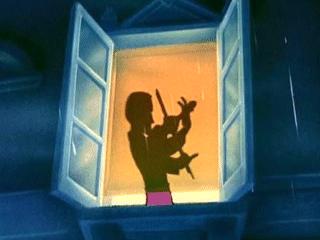 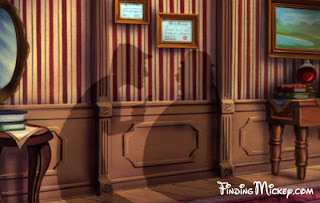 Even though I only got to read a little of the book I really enjoyed it.  I prefer the villains in the book which are just three mouse thugs.  I thought the villain in the movie was a little over the top.  This movie is not my favorite Disney movie and I think it is because I didn't really think the villain was that great.  I really like the parts though when Basil was being a detective!  By the way.. BUZZ Feed did a great post on the Great Mouse Detective!! 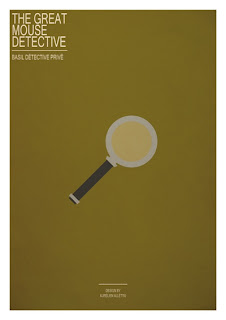 My other PROJECT DISNEY:
Snow White
Cinderella
Peter Pan
Treasure Planet
Sleeping Beauty
The Hunchback of Notre Dame
The Princess and the Frog
Pinocchio
Fantasia
Beauty and the Beast
Lady and the Tramp
Alice in Wonderland
The Rescuers
The Rescuers Down Under
Tangled
Oliver and Company
Mulan
The Little Mermaid
Bambi
101 Dalmatians
Frozen
Fantasia 2000
The Jungle Book
The Emperor's New Groove
The Sword in the Stone
Aladdin
Atlantis
The Aristocats
The Lion King
The Many Adventures of Winnie the Pooh
Winnie the Pooh (2011)
Robin Hood
Hercules
Pocahontas
Dumbo
The Black Cauldron
Mary Poppins
Lilo and Stitch
The Adventures of Ichabod and Mr. Toad
Make Mine Music
Tarzan
Fox and the Hound
Melody Time
Here is the host Picture Me Reading's exciting Great Mouse Detective Post!