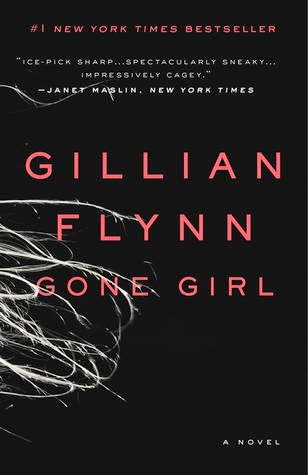 On a warm summer morning in North Carthage, Missouri, it is Nick and Amy Dunne’s fifth wedding anniversary. Presents are being wrapped and reservations are being made when Nick’s clever and beautiful wife disappears. Husband-of-the-Year Nick isn’t doing himself any favors with cringe-worthy daydreams about the slope and shape of his wife’s head, but passages from Amy's diary reveal the alpha-girl perfectionist could have put anyone dangerously on edge. Under mounting pressure from the police and the media—as well as Amy’s fiercely doting parents—the town golden boy parades an endless series of lies, deceits, and inappropriate behavior. Nick is oddly evasive, and he’s definitely bitter—but is he really a killer?


With the movie coming out shortly I knew I had to get my hands on this book and read it.  Thanks to my sister-in-law who started asking me if I had read it I pushed it up my TBR pile.  I am still thinking about this book days later.

This is truly one of those books where you don't want spoilers. There is a great twist that is fun.. well a few twists I suppose.  I avoided the trailer for the upcoming movie because I had heard there was spoilers in it (turns out there aren't any), I had avoided reviews, I avoided everything.  Then one evening I was talking to my mom and she just busted out with the big spoiler!!  NOOO I tried to forget what she said. Luckily it was only a spoiler for the beginning of the book.  This will be a spoiler free review.

This book is about the disappearance of Amy Dunne and what happens during this disappearance. The first book goes back and forth between Amy's diary and her husband Nick and what he is going through.  I have read about some people being bored during this part of the book.  Frankly I enjoyed this part more then the second part.  I like how we really get to read about a husband and wife and what each one thinks.  I related to this.  I think all marriages have you questioning what the other spouse is thinking.

The second part of the book is so different then the first.  The author does an amazing job of writing characters with all kinds of different personalities. The ending of this book also surprised me at how it ended.  I was reading on my ereader so I didn't know how many pages left just a percentage.  I had read 95%, surely more was coming.  I flicked the ereader's page and the title of the next page said "Acknowledgments"  WHAT??  That was the end?? No NO NO!  I mean the ending makes sense but I just didn't expect it.

The movie... well I heard the Gone Girl movie has a different ending then the book. Huh.. that's what I say about that. I feel that the way this book ended was actually perfect.  So I am not sure how I feel about a different ending. Though I did read that the author Flynn wrote this ending so that should hopefully make it worth it.  Here is the movie trailer if you haven't seen it yet.  If you haven't wanted to read this book before, watching the trailer will probably make you want to pick it up!

Let's chat about the book!! Spoilers are welcome in the comments but be sure to mark them for those who might read through the comments. I can't wait to see what you all thought of this book.
Posted by Angela's Anxious Life at Tuesday, July 22, 2014