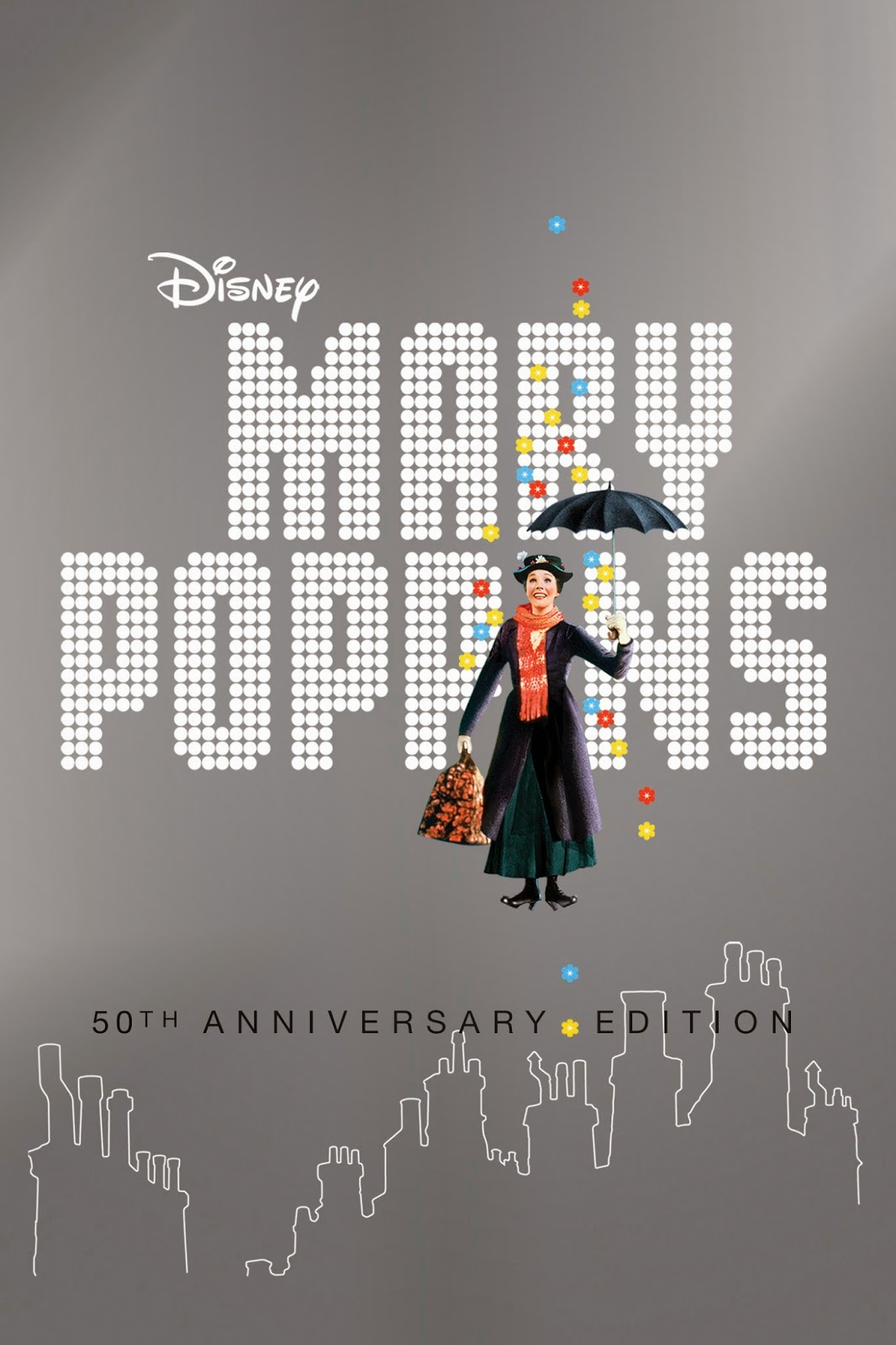 Most of my Project Disney posts have been animated features.  This one is part animation part live action and is based on a book series so I wanted to add this movie in.  I read the book Mary Poppins by P.L. Travers for this Project Disney though there is an entire series of books and I would like to read them all.  I was quite surprised by the book series, Mary Poppins is quite different to me then the movie.She is tough.. very stern.  I don't even picture her smiling in the book.  The book, Mary Poppins doesn't sing, she is all about her looks, never says "Supercalifragilisticexpialidocious".. so Disney did a really good job of making her very magical.

As you may know..... Mary Poppins is about a group of children who need a Nanny and can't seem to keep one.  So in floats Mary Poppins.  The family of the children is a wonderful family.  The dad, Mr. Banks, has a much more predominant role in the film then in the book.  In the book he is just constantly working and barely home.  The house that looks like a boat at the start of the film is in the book.  I loved to read about it and all the neighbors would look and stare at it.

What I really love about the film is that though... at times it strays from the novel.. it does give little hat tips to the book.  That little dog who was at the door???  He has a big role in the one of the chapters of the book where Mary Poppins relates to his owner what he is saying.  The book also has four children not two.  Though Jane and Michael are present the twins who are babies John and Barbara are not present in the film at all.  Though I can see this was a good choice by Disney because most of the time in the book Mary is just pushing them around in their stroller.

Music in this film is spot on and really it's too bad the book can't sing at me.  I just kept thinking about the music while reading.  Mary does give the children a spoon full of sugar the first day she meets them.  Watching the film now I can see the CGI is kind of a mess.  The scenes are clearly fake, though a child would never know this. 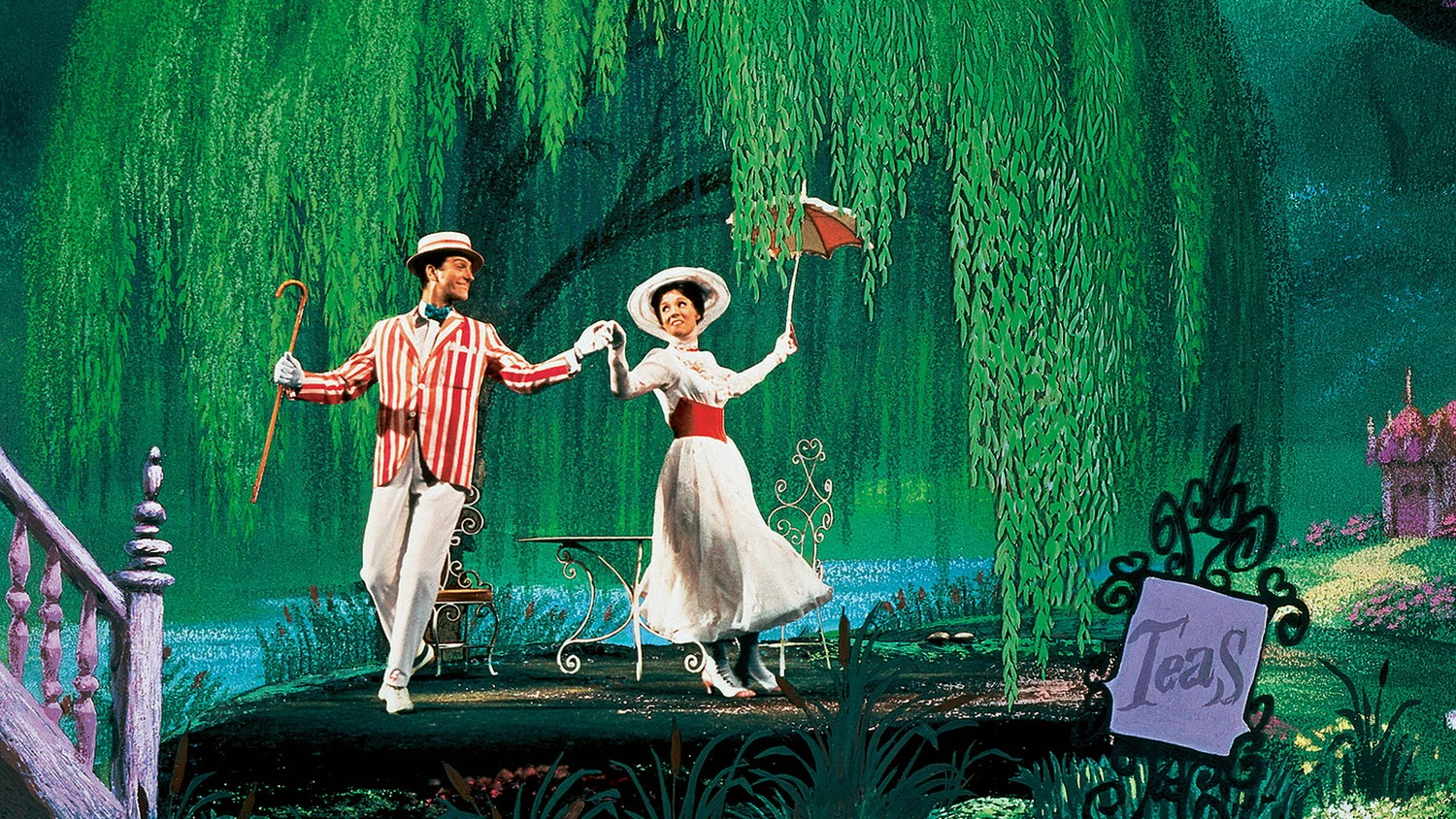 I especially love "The Day Out" chapter/scene.  This is where Bert draws chalk drawings and they are able to enter the art and become part of it.  This has a big difference in the book.. Mary and Bert are alone and go on a date together.  It is really a sweet gesture because Bert doesn't have enough money to take Mary on a date so they enter chalk art and go on a date there.  I was also very surprised that this is the only chapter in the book that includes Bert.  The children never get to meet him. This was always my favorite part of the film.  I thought it was so magical.. perhaps because I love art and have always imagined being able to enter a piece of art.

In the film when Uncle Albert is laughing and can't get off that ceiling that is also in the book and is pretty much the same.  Though I didn't love this part in the book it is kind of funny in the film.  One of my favorite parts of the film is when we get to look into the snowglobe and see the woman feeding the birds.  In the book they visit this location one day while shopping.  Though Mary Poppins acts like it is nasty and just awful.  In the movie it is just magical and sad at the same time for me.  I love birds and I just think it is so special that the woman wants to feed them.  Clearly she is homeless and makes that her mission in life.  Just beautiful .. and the song is so touching to me.


Really that is where the similarities from book to movie end.  There are a lot of other chapters in the book that talk about other adventures the children have with Mary. There really is no big plot throughout the whole book. It appears the sequels are the same too.  They go to a zoo at night and see humans in cages instead of animals. It was an odd chapter in the book.  There is an entire chapter about a cow who can't stop dancing.

Julie Andrews is so perfect for the film.  Her voice is beautiful and well she is beautiful.  She looks like such a proper lady to me.  I would really love to be just as much of a lady as she is in real life. Let's be honest... this is a fantastic film.

I have always wanted to read this book series.  It was quite short and pleasant.  Yes Mary Poppins was different then I expected.  In the movie she is always smiling and what not.  I would really like to see the Broadway show of this.  I think it would be fun to see this live.  Have any of you been to the Broadway show??


Be sure to check out my other Project Disney:
Snow White
Cinderella
Peter Pan
Treasure Planet
Sleeping Beauty
The Great Mouse Detective
The Hunchback of Notre Dame
The Princess and the Frog
Pinocchio
Fantasia
Beauty and the Beast
Lady and the Tramp
Alice in Wonderland
The Rescuers
The Rescuers Down Under
Tangled
Oliver and Company
Mulan
The Little Mermaid
Bambi
101 Dalmatians
Frozen
Fantasia 2000
The Jungle Book
The Emperor's New Groove
The Sword in the Stone
Aladdin
Atlantis
The Aristocats
The Lion King
The Many Adventures of Winnie the Pooh (1977)
Winnie the Pooh (2011)
Robin Hood
Hercules
Pocahontas
Dumbo
The Black Cauldron
Lilo and Stitch
The Adventures of Ichabod and Mr. Toad
Make Mine Music
Tarzan
Fox and the Hound
Melody Time
Posted by Angela's Anxious Life at Friday, July 11, 2014