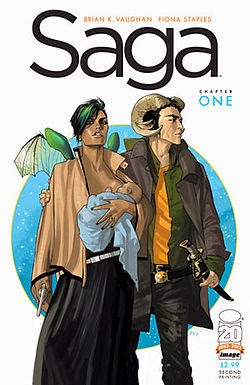 
When two soldiers from opposite sides of a never-ending galactic war fall in love, they risk everything to bring a fragile new life into a dangerous old universe. From New York Times bestselling writer Brian K. Vaughan (Y: The Last Man, Ex Machina) and critically acclaimed artist Fiona Staples (Mystery Society, North 40), Saga is the sweeping tale of one young family fighting to find their place in the worlds. Fantasy and science fiction are wed like never before in this sexy, subversive drama for adults. This specially priced volume collects the first six issues of the smash-hit series The Onion A.V. Club calls "the emotional epic Hollywood wishes it could make." Collects Saga issues #1-6

As most of you who follow the blog know I read a lot of comics and graphic novels. I have seen Saga floating around the blogospere for a while now and had to get my hands on it. I am glad I gave it a go!

Seriously this graphic novel is quite clever and unique from anything I've read before.  This is not for kids... there is sex, nudity, swearing, murder and mayhem!  The series is about two lovers who are from different worlds (which are at war) who have a baby during this war and try to escape to protect their family.  I love that the two main characters Alana and Marko (who you see on the cover) biker and fight yet just love each other. They fight over the baby's name and that is cute and fun.  At the same time you are reading the main story you also read a side hand written story which is the daughter telling her story as a grown up (I'll keep her name secret for you). I love this whole two stories in one. 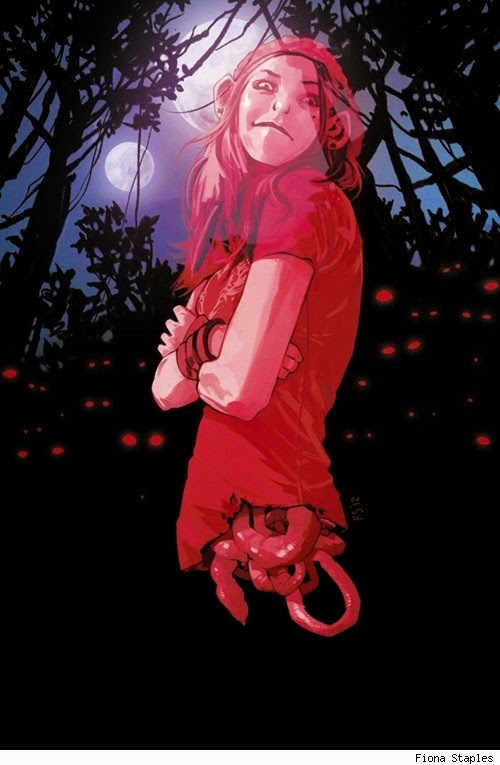 This book is very sci-fi.  The art illustrates this in an amazing way.  There is a race of robots that have TVs for heads, a ghost of a teenage girl who died and now has nothing underneath her guts, a few assassins one that has a giant cat for a pet who detects when he is lying. I can't believe there are only 3 volumes out.  I wish there was more (like by the time I started the Fables series there was 17-18 volumes out). 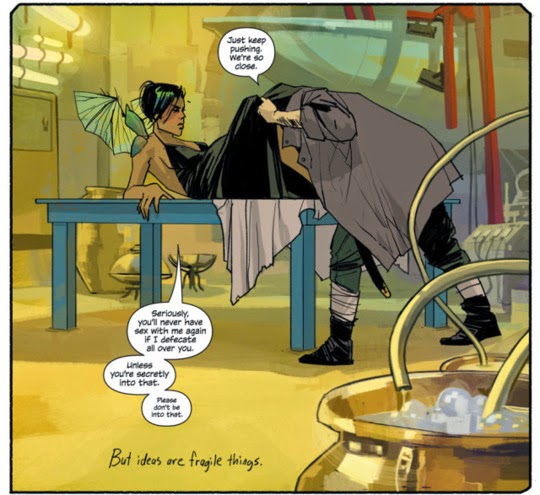 I really like how Vaughan pulls the readers in and really makes us care about these characters.  Are they going to live???  Where will they go?? What will happen to them??  Of course the series ends in a cliff hanger as well.  We even really get to know the characters who are out to capture the couple.  this includes the Assasan The Will and Robot IV.  We get to know a little background on them as well and you kind of start to care about them too.

This is an excellent series and I recommend this to everyone.   Be sure to be on the look out for my Comic Adventure posts where I will review the next two volumes of the series. This comic is certainly worth all the hype that it's getting.  The artwork, the story just fabulous!

Sun is shinning!!!  Great day to go outside and read this book.
Posted by Angela's Anxious Life at Tuesday, July 15, 2014