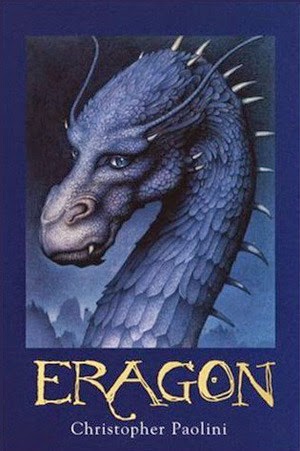 One boy . . . One dragon . . . A world of adventure. When Eragon finds a polished blue stone in the forest, he thinks it is the lucky discovery of a poor farm boy; perhaps it will buy his family meat for the winter. But when the stone brings a dragon hatchling, Eragon soon realizes he has stumbled upon a legacy nearly as old as the Empire itself. Overnight his simple life is shattered, and he is thrust into a perilous new world of destiny, magic, and power. With only an ancient sword and the advice of an old storyteller for guidance, Eragon and the fledgling dragon must navigate the dangerous terrain and dark enemies of an Empire ruled by a king whose evil knows no bounds. Can Eragon take up the mantle of the legendary Dragon Riders? The fate of the Empire may rest in his hands.

I finally finished a book! Yes!! I have read this book twice before. One of those times was when I was having anxiety really bad and I remember being happy that I read the book. It was an easy comfortable read. I am currently dealing with anxiety again so I thought why not read this book??? I have been meaning to re-read it anyways since I never read the last two books in the series. So I now plan to finish the series. It did take me a while to get through it.  I would read it... get side tracked with anxiety and then pick it back up.

Eragon is such a fun book.  The movie is awful... don't bother watching it.  This book though has just a lot of great fantasy.  The descriptions of the world is amazing.  The book was my first YA book as an adult really.  At the time I was so used to reading books like Stephen King so this really introduced me into a whole new world.  Now I love YA books.  I also enjoyed that this book is written from a boy's point of view.  Thought that was a great new take other then the books that are usually from a girl's point of view.

What the book is about really is Eragon finding his way in the world.  Though.. if I were in his situation I would just panic. He finds a dragon egg... which hatches.  Then people come looking for him and destroy his home including his caretaker.  Really he has no one now.  Then he must go through several adventures trying to figure out what is next in life for him.  Isn't this something we all must do???

I am excited to get started on the next book in the series.  I did read that one once before... but I don't really remember it.  I probably will once I get started reading it. Hopefully it doesn't take me as long to read that book as it did this one.  I do have a road trip coming up and will probably be able to get a lot of reading done on that trip.