It's time for the weekly book blogger hops again! A great opportunity to meet new bloggers and say hi to old.

Crazy For Books' Book Blogger Hop
Question this week:  Q:   "What book-to-movie adaption have you most liked?  Which have you disliked?"
I have most like the Lord of the Rings trilogy.  I know that everyone is probably going to say that or Harry Potter.  But really... you must admit these were good adaptations.  We even went to the theater for 16 hours when the final film came out and watched the first two (extended) movies and then saw the premiere of Return of the King at midnight.  These tickets sold out across the country in 20 minutes.  Good thing at the time my aunt was the secretary of the CEO (AnSchultz) of Regal Cinemas and he was able to land us 4 tickets to the sold out show!!
And the one I disliked.. well that is easy.  Eragon.  Worst adaptation.  Oh and all the Stephen King books.  They never make good movies at all! BUT for those that are interested in all things King like myself.... there is a book that has some of his stories that were made into movies in one book. Now the movies aren't so good but the stories are great.  Stephen King Goes to the Movies
Goodreads description:
Stephen King revisits five of his favorite short stories that have been turned into films: The Shawshank Redemption (based on the novella "Rita Hayworth and the Shawshank Redemption") was nominated for seven Academy Awards, including Best Picture and best actor for Morgan Freeman. 1408 starred John Cusack and Samuel L. Jackson and was a huge box office success in 2007. The short story "Children of the Corn" was adapted into the popular Children of the Corn. The Mangler was inspired by King's loathing for laundry machines from his own experience working in a laundromat. Hearts in Atlantis (based on "Low Men in Yellow Coats," the first part of the novel Hearts in Atlantis) starred Anthony Hopkins. This collection features new commentary and introductions to all of these stories in a treasure-trove of movie trivia. 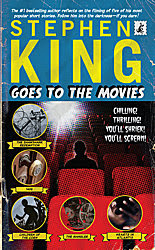 So the question this week is: How many books do you read in a week? And in what format do you read them or listen to them?

I haven't been reading as many books as I usually do these past two months.  Guess I have been too busy!  :( So I read about 1 a week. I have been reading more and more on my Nook Color.  Otherwise I get books from the library.

Well everyone leave me your info!  I would love to check out your Follow Me Friday posts!
Posted by Angela's Anxious Life at Thursday, May 26, 2011