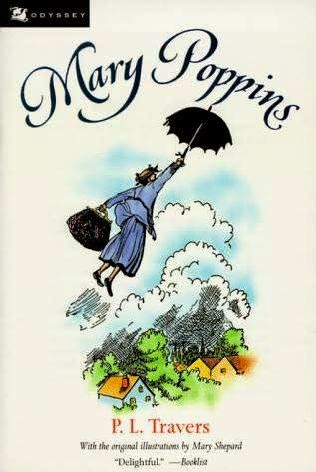 
By P.L. Travers, the author featured in the upcoming movie Saving Mr. Banks. From the moment Mary Poppins arrives at Number Seventeen Cherry-Tree Lane, everyday life at the Banks house is forever changed. It all starts when Mary Poppins is blown by the east wind onto the doorstep of the Banks house. She becomes a most unusual nanny to Jane, Michael, and the twins. Who else but Mary Poppins can slide up banisters, pull an entire armchair out of an empty carpetbag, and make a dose of medicine taste like delicious lime-juice cordial? A day with Mary Poppins is a day of magic and make-believe come to life!


I have been wanting to read this series for a while.  I recently compared book to movie on my Project Disney which was about Mary Poppins so it was the perfect opportunity to read this book.  I was quite surprised at the Mary Poppins in the book... she is just so moody.  She doesn't sign and dance, and rarely smiles.  She is quite strict with the kids and seems like she doesn't even want to be their nanny. There are four kids and not two.  Mary Poppins does not try to get the family to love each other and spend more time together.  Truly she doesn't really have a goal.. she just loves to have fun.

The book is really chapters full of the children's adventures with Mary Poppins.  She takes them on several trips to places like the zoo at night .. where they travel through a zoo talking to animals and then discovering Mary Poppins in the middle of the zoo where all the animals are celebrating her birthday. This scene though does have a message behind it though, as the kids travels through the zoo there are humans in the cages.

There is another story about a dancing cow who couldn't stop dancing and it turns out there is a falling star stuck in it's horns.  So she must jump over the moon to remove it (Mary tells the children this story when they see a cow running down the road). There is a story where the twin babies talk to a bird who comes in and out their window.  They find out that some day they will get older and no be able to understand the bird.  This upsets them and they swear it will never happen to them.  But of course they turn one and no longer understand the bird.

So really as you can see the book is just full of adventures. Since I have not continued on in the series I am not sure why Mary Poppins comes back.. or if she ever changes her attitude.  The book did read pretty fast so I wouldn't mind reading more of the stories in the series. I do think it was magical stories and would be fun to read to a child (or even an adult looking for a cute fun read). The illustrations in the book are great too.. perfect for this story.


Clouds are covering! A read that lets me down every now and then but peaks out of the clouds!
Posted by Angela's Anxious Life at Sunday, July 13, 2014