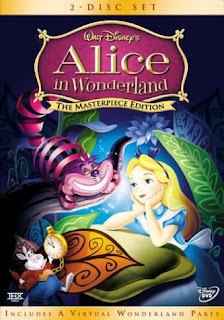 Alice in Wonderland
"WHO ARE YOU??" (my favorite saying from the movie from the Caterpillar of course).  Project Disney is covering Alice in Wonderland this week based off the book Alice's Adventures in Wonderland and Through the Looking Glass by Lewis Carroll.  I read this book a few years ago.  I must admit I love this Disney movie but didn't really like the book at all.  It was so odd.   The book has branched an amazing series of retellings though including the Disney film.

The book has many of the same characters as the movie, the White Rabbit, the Caterpillar, a Dodo bird, Cheshire Cat, Mad Hatter, and the Queen of Hearts.   Just as in the movie, Alice bounces around from place to place in Wonderland.  Alice meets a Duchess in the book who has a baby and gets mad at Alice and throws her baby at her.  Alice catches the baby and goes outside to find it's a pig. This part is really strange to me! A lot of the same lines we hear in the movie are used in the book too. The Cheshire Cat explains to Alice that madness is the chief characteristic of the residents of Wonderland, and that to be in Wonderland is to be mad.

The movie has some really great scenes.  There is an entire scene of beautiful flowers that come alive and sing a fun song about all kinds of different flowers.  The Caterpillar part of the film is so lyrically clever ( he is smoking his hookah so Disney slides an anti-smoking ad on the DVD before the movie starts). In the book when Alice eats the mushroom her neck grows extremely high (which is where the classic art comes from that everyone sees) unlike in the movie her whole body grows. 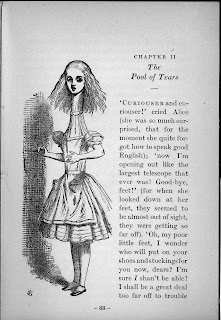 Another amazing part of the film and book is of course the Tea Party with the Mad Hatter.  The song a "Very Merry Unbirthday" is fun, I sing it all the time.  Disney does a good job here of following the book.  The Mad Hatter does talk about riddles and time, and a watch (it's the Hatter's watch that is broke not the White Rabbit since the White Rabbit is not actually at the tea party in the book).  A character that I have always loved is the Cheshire Cat.  In the movie Alice meets him a few times.. in the book she doesn't see him again until the croquet game where she meets the Queen of Hearts.   The Cheshire Cat leads Alice around in the movie to the different locations she visits.

The music in the film is some of the best I think in Disney films.  There are 14 original songs in this movie. I love how the Queen of Hearts is portrayed in the movie.  In the book she isn't as evil, in the movie it's off with everyone's heads.  The croquet game is fun to watch using flamingos as mallets, hedgehogs as balls, and card soldiers as goals.  In the movie a prank is playing on the Queen and a trail happens right after (in the book someone has stolen some tarts). The Cat made it seem like Alice caused the prank and the Queen tries to take Alice's head.   In the movie Alice runs and there is a chase back to the door to lead her home, and in the book she simply wakes up.

The movie is great I just love it... the book was neat but just odd. I was a little confused reading it but I suppose that is the point.  I love all the spinoffs from this book.  Here is the Annie Lebovich picture from her Disney series (I post these on all my Project Disney posts).  This is my least favorite out of all of her pictures.  I am not sure why.. I just don't like the close up shot.  I think she could've had a fabulous background and a more whimsical picture. 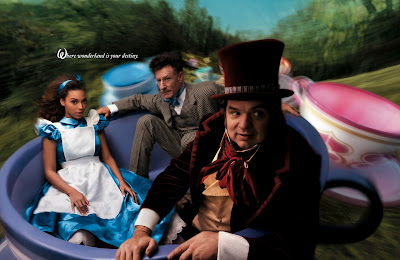 Be sure to check out my other Project Disney posts:
Snow White
Cinderella
Peter Pan
Treasure Planet
Sleeping Beauty
The Great Mouse Detective
The Hunchback of Notre Dame
The Princess and the Frog
Pinocchio
Fantasia
Beauty and the Beast
Lady and the Tramp