Project Disney- Lady and the Tramp 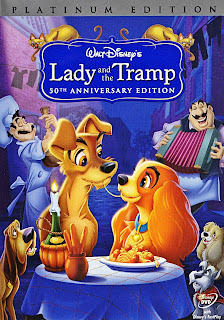 Confession:  This was not one of my favorite movies growing up.  I don't know why either.  As I have gotten older I have enjoyed this movie more.  Unfortunately I am totally bummed but I was unable to find the original story that the movie is based off of.  Lady and the Tramp by Ward Greene (1953) - an expansion of "Happy Dan the Whistling Dog" is what the movie is based off of and it's pretty impossible to find.  I looked all over the internet, tried my library, tried inter-library loan.  Just came up blank.  Though on the Disney Wiki you can find out a little information on the short story. For now... I am just going to review the film!

I love the music in this film.  It one of the reasons why I think this movie is a Disney classic and people still really love it.  The scene when Lady and Tramp share a plate of spaghetti is so romantic.  Disney does a great job of getting you to really feel the love despite watching two dogs.  The music in this scene "This is the Night" and the ambiance is just perfect.  Lady and the Tramp has a big message to me though.  The difference between two classes.  The rich and the poor.  I can't help but feel bad for Tramp and how he's treated.   We see even how judgmental Lady's friends are when they see Tramp.

What I like about this film too is showing that people who have babies/families can still take care of their pets.  I know too many people who get rid of their pets after having children.  Like there just isn't room or any time for them.  So sad.  I understand priorities change... but to just get rid of them?  The film also shows a scene in the pound which I like too.  People never see really what's in the pound.  If you have ever been to a humane society then you know when you go in you just see a counter and a clerk.  You don't actually see the cages of all the animals which makes it easier to get rid of a pet.

Back to the fun Disney movie and off my soap box.  There are some great side characters in this movie.  The Siamese cats and their fabulous song!!  I love it!  I know that people say that these cats are racist.  As a child though I didn't notice this and just thought... well that they were Asian cats.  The end of the movie is cute... Lady and Tramp have babies.  Now as an adult though I can't help but think that this is NOT what the puppies would look like. The movie Lady and the Tramp II: Scamp's Adventure, is actually based on the puppies.

Be sure to check out my other fun Project Disney posts:
Snow White
Cinderella
Peter Pan
Treasure Planet
Sleeping Beauty
The Great Mouse Detective
The Hunchback of Notre Dame
The Princess and the Frog
Pinocchio
Fantasia
Beauty and the Beast
Alice in Wonderland
The Rescuers
The Rescuers Down Under
Tangled
Oliver and Company
Mulan
The Little Mermaid
Bambi
101 Dalmatians
Frozen
Fantasia 2000
The Jungle Book
The Emperor's New Groove
The Sword in the Stone
Aladdin
Atlantis
The Aristocats
The Lion King
The Many Adventures of Winnie the Pooh
Winnie the Pooh (2011)
Robin Hood
Hercules
Pocahontas
Dumbo
The Black Cauldron
Mary Poppins
Lilo and Stitch
The Adventures of Ichabod and Mr. Toad
Make Mine Music
Tarzan
Fox and the Hound
Melody Time
Posted by Angela's Anxious Life at Friday, July 12, 2013