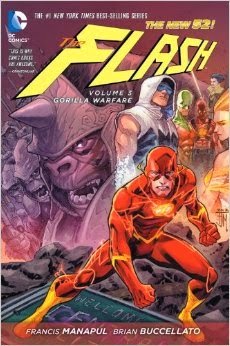 I don't know why I am still reading The Flash comics.  I just don't enjoy them that much.  I can't stand Gorilla Grodd's plot line (the villain).  I just don't care for it at all... it is like a chore to get through.  I have always thought that the illustrations in the Flash comics is neat though.  I like how the words are spelled out in big letters with illustrations inside them.  The illustrations also do a good job of making people inside the comic look like they really are moving fast. The end of this volume did get a little better.  I am hoping that Grodd is now out of the comic and we don't have to read about him anymore. 2 out of 5 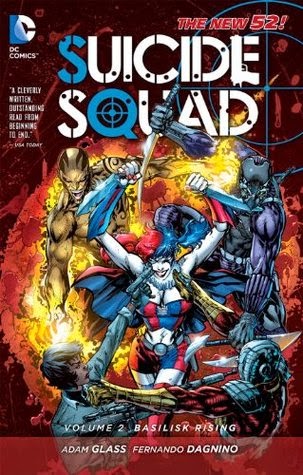 I have been reading the Suicide Squad series since I really enjoy the Harley Quinn story line. She is barely in this one though and that was disappointing.  This book has the team learning that there is a traitor among them.  There is a crossover here with The Resurrection Man comic which my library doesn't have, not that I had planned on reading it anyways.  We do get to learn more about Amanda Waller and why she began the Suicide Squad, which I found interesting.  I just hope that the next volume has more Harley Quinn in it. 3 out of 5 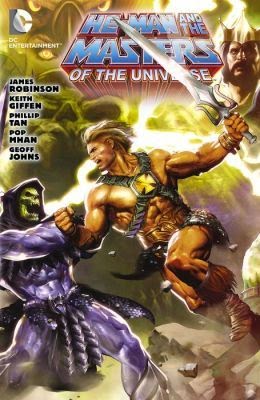 When I heard that there was a comic for He-Man and the Masters of the Universe by DC I was floored.  I love He-Man and She-Ra.  Always have.  So I couldn't wait to get my hands on this comic. I was able to find it at my library too.  I really enjoyed it.  Most of the comic is about He-Man trying to get his memory back.  Skeletor stole it from him and his crew.  He man did act a little goofy and some of the things he said in the comic was hilarious.  I do wish we could've seen more of Adam as He-Man but that doesn't happen till the end of the comic.  So I am sure in the next volume he will take more of his He-Man role.  It will be super fun if She-Ra enters the comics at some point too.  5 out of 5 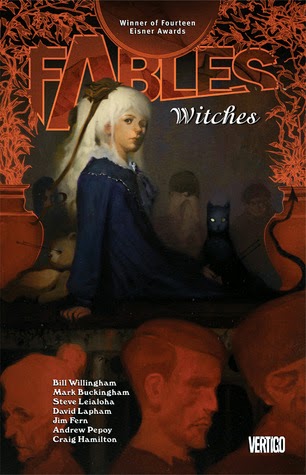 I love the Fables comic series.  Now this is some good stuff!  I had put it aside and starting reading the spinoff Jack of Fables because I thought I needed to read that series to get what is going on in the Fables series since they did have a cross-over in volume 13.  But Jack's series isn't that good to me.  So I picked Fables back up and am glad I did.  I loved this volume.  It's all about the witches, which finally progresses the main story line. I loved seeing Bufkin the flying monkey take charge in this issue and become the badass he really is.  Seriously if you are looking for a great comic book series, maybe have never read one before, this is one to pick up.  5 out of 5

I am now up to 50 books towards my Graphic Novel Reading Challenge!