The Golem and the Jinni by Helene Wecker- Review 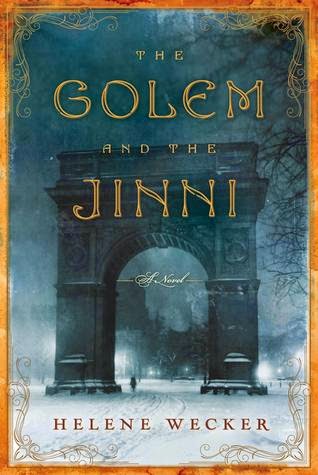 The Golem and the Jinni by Helene Wecker

When I saw the cover and the title of this book I really wanted to read it.  I have also been wanting to read more magical realism books so that is another reason why I picked it up.  Here is the goodreads description:

Chava is a golem, a creature made of clay, brought to life by a disgraced rabbi who dabbles in dark Kabbalistic magic. When her master, the husband who commissioned her, dies at sea on the voyage from Poland, she is unmoored and adrift as the ship arrives in New York in 1899. Ahmad is a jinni, a being of fire, born in the ancient Syrian desert. Trapped in an old copper flask by a Bedouin wizard centuries ago, he is released accidentally by a tinsmith in a Lower Manhattan shop. Though he is no longer imprisoned, Ahmad is not entirely free – an unbreakable band of iron binds him to the physical world. The Golem and the Jinni is their magical, unforgettable story; unlikely friends whose tenuous attachment challenges their opposing natures – until the night a terrifying incident drives them back into their separate worlds. But a powerful threat will soon bring Chava and Ahmad together again, challenging their existence and forcing them to make a fateful choice.


I went on a long road trip and listened to this book as an audio book.  It was almost perfect timing too.  I only had 1 hr left on the audio when I got home. I enjoyed this audio book's narrator George Guidall.  I love that he had an middle eastern accent which really brought the story alive to me.  This book was really neat... including magic, romance, friendship, and much more.  It takes a story that is meant to be magical... but also teaches us somethings.  We learn about immigrants and what they experienced coming to our country.

We get to read about an old world where the Jinni comes from .. who is brought into a new world (the end of the 19th century) along with a female Golem. Chava is a golem. Ahmad is a jinni.  They have a chance meeting in New York City and become strange friends.  They both have their own lives going on in NY.. and yet find the time to meet up.  The golem and the jinni try to pass as humans.   There are many characters in this book who all seem to tie together eventually.  I find them all interesting.  Wecker writes characters so well.

I originally became even more interested in reading this book when I read a review on it over at Jorie Loves a Story.  She even goes into depth to learn more about golems and jinni. I think this book fits so well into the magical realism category. It is a book where magic and legends just might be true. I really did grow to love the characters and want to know about their future together.  I really loved that there is a mix of a golem which is a Jewish myth about which is an automation of earth brought to life and then there is the jinni which is an Arab myth about a creature who is fire.

I really did enjoy listening to this book.  The plot never went in the direction I was waiting for, but it was still good.   If you are looking for magical realism then this is the book for you.