Project Disney- The Adventures of Ichabod and Mr. Toad 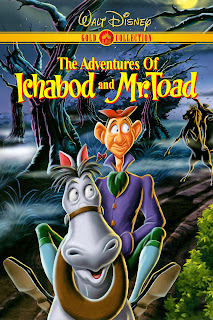 Project Disney this time around is the movie The Adventures of Ichabod and Mr. Toad. This movie is based off the two stories The Wind in the Willows by Kenneth Grahame and The Legend of Sleepy Hollow by Washington Irving.The movie is actually two separate stories but into one film but is still part of the Disney Canon. I am sure if you grew up with Disney you have seen the Sleepy Hollow part of the film, especially since it was shown every year with A Disney Halloween (which I love and you can read all about my review on it here).  But the Adventures of Mr. Toad is a lesser known film. Each segment has a narrator who tells the story to us. 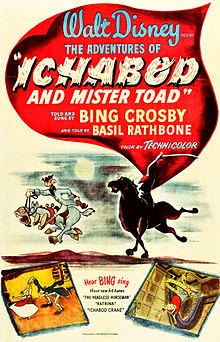 Let's start with Mr. Toad.  I really enjoyed reading The Wind in the Willows.  Though I must say, this is a book for a different generation of children.  I read it and thought to myself that as a child I might find it a bit boring.  The book actually focuses on all the characters you see in the film, Toad, Water Rat, Mole and Badger all have their own stories going on.  The movie really only follows Toad and the mischief he gets into.  Mr. Toad is a rich Toad who spends his money carelessly and his friends try to convince him to be smarter with his money. Toad loves to take on hobbies and go crazy with them. He discovers motor cars and has to have one.  He gets one by purchasing it from a shady character but is later arrested for stealing a car. Turns out he is framed by the man who sold him the car, because the man secretly wants to take over Toad Hall where Toad lives.  Toad and his friends show up and fight and are able to get the deed back from the man and this part of the film pretty much ends there.  In the Wind in the Willows Toad's adventures are quite different.  He actually DOES steal the car.  We also get to spend time with him in prison when he breaks out. The battle to get Toad Hall back is a little bit more violent then the Disney movie shows.  Plus the humans aren't talked about in the book as much as they are in the movie. In fact.. they are a little more mysterious.  The animals even go one night to sit around and watch them through the windows.

The Wind in the Willows is a much larger story and I would recommend you reading it to get a much richer experience though I do love that Disney took Toad's story from it.  Though I don't think Toad will ever change who is he.. as you can see at the end of the film when you just know he is going to take up airplanes next.

Next up is a film I love!  The Adventures of Ichabod! Of course... as I said above, I love a Disney Halloween so much so I have very fond memories of this one.  Surprisingly, I hadn't read the story The Legend of Sleepy Hollow before now so I was glad to read that story for this Project Disney also. The movie pretty much makes Ichabod Crane look like he is described in the book.  I love the music that Disney puts along with this film too.  This movie follows the story by Irving pretty well. Ichabod lives in Sleepy Hollow and is a school teacher there, using the parents of all the students to feed and shelter himself.  He then meets a lovely lady and tries to get her to like him.  Another man Bones also wants to marry her.  So they begin to compete for her love.

There is a party and the story of the Headless Horseman is told.  Ichabod goes home but is confronted by the Headless Horseman... this is the part of the story I really loved!  So many theories about the ending. What could've happened to Ichabod?  He and the Horseman get into a chase and the story ends with Ichabod falling from the horse and everyone guessing what happened to him?  Did he die?  Go somewhere else because he was embarrassed and become a lawyer? This story and move really do follow quite closely together.

The Adventures of Ichabod is so fun... a perfect creepy film.  Disney does a good job with it.  It is a short story and I read it in one sitting so you should for sure check it out and read it/watch it.  I enjoyed this film and thought the narration does a good job of keeping you feeling like this is one movie rather then two different films.

Be sure to check out my other Project Disney:
Snow White
Cinderella
Peter Pan
Treasure Planet
Sleeping Beauty
The Great Mouse Detective
The Hunchback of Notre Dame
The Princess and the Frog
Pinocchio
Fantasia
Beauty and the Beast
Lady and the Tramp
Alice in Wonderland
The Rescuers
The Rescuers Down Under
Tangled
Oliver and Company
Mulan
The Little Mermaid
Bambi
101 Dalmatians
Frozen
Fantasia 2000
The Jungle Book
The Emperor's New Groove
The Sword in the Stone
Aladdin
Atlantis
The Aristocats
The Lion King
The Many Adventures of Winnie the Pooh (1977)
Winnie the Pooh (2011)
Robin Hood
Hercules
Pocahontas
Dumbo
The Black Cauldron
Mary Poppins
Lilo and Stitch
Make Mine Music
Tarzan
Fox and the Hound
Melody Time
Posted by Angela's Anxious Life at Monday, August 11, 2014