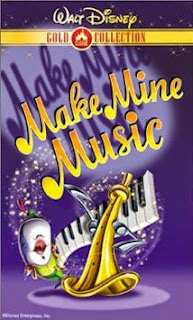 Project Disney this week is Make Mine Music (1946).  I always loved watching the music videos from this growing up.  It is very similar to Fantasia the way it is set up.  Make Mine Music is another one of those movies in the Disney Canon that not everyone is aware of.  There are ten different music videos in the film... I just love love the music too.  It had a wide variety of different genres of music in the film.  This movie is a little difficult to find.  Disney hasn't re-released it on video for many years.

The film is presented as if you are at the theater.  So before each music number begins you see a curtain opening with the credits for the next show. The credits look like posters with the art styles of the 40s. There were three music videos that have source material for them the rest were unique stories.  There really weren't any books to read for this Project Disney but it was still fun.  If you enjoy music and enjoyed Fantasia go watch this movie.  You can find it on the internet since the movie is hard to find on DVD.  I am going to talk about each video

The opening for Make Mine Music "The Martins and the Coys" was cut from home video. People found it was too violent for children because there are a lot of guns in the short. Luckily in this day and age you can easily find a video of it on youtube. The short is based off of a historic feud by the Hatfields and the McCoys in West Virginia and Kentucky. There were two initial murders that began the feud. The first was over the fact that one of the McCoys joined the union army during the Civil War—an act of disloyalty. The other was over a pig and who owned it. It escalated and ended by the time about ten people had been killed.  I had to do research on this one on the internet but it is quite an interesting feud. The Disney video shows two clans fighting and by the time they are done there is only a boy Martin left and a girl Coy.  The eventually meet up and fall in love.  I thought it was a cute short.  One thing I do like about older Disney films is that we do get a glimpse of a little history that isn't widely talked about anymore. 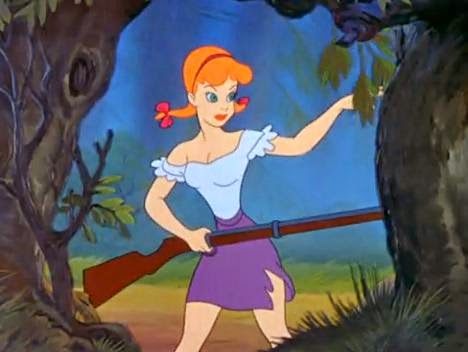 "Blue Bayou" is the next video.. I loved the song here and the video is pretty.  The short includes two Egrets flying around the Everglades.  I read that originally this one was supposed to be in Fantasia but for some reason didn't make the cut.  So here it is in all it's glory. 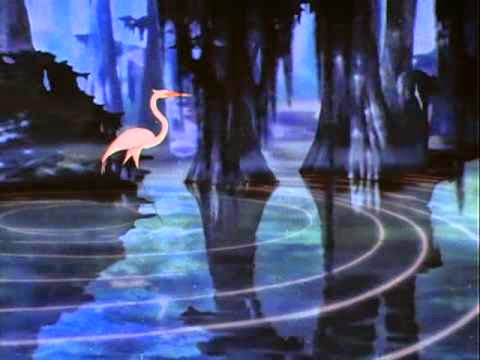 The next video is "All Cats Join In".  I remember being facinated by this short when I was younger.  It's about a bunch of teenagers getting together to go to a dance.  I loved watching the girl get ready for the night.  I was able to find a video of this one and am glad so that you can enjoy it.  Super fun!

"Without You" is the next short.  This song is about lost love and we watch a wonderful video made of rain drops that turn into impressionist paintings. The song and the art is my least favorite in the film but it is still beautiful.

The next short "Casey at the Bat" is based off a poem by Ernest Thayer. This video is about an arrogant ballplayer who is loved by everyone.  He goes up to bat and casually avoids hitting the first two pitches and the thinks he will get the third pitch but he's out. You will recognize the voice in this video.. it is Jerry Colonnawho voices the White Rabbit in Alice in Wonderland. 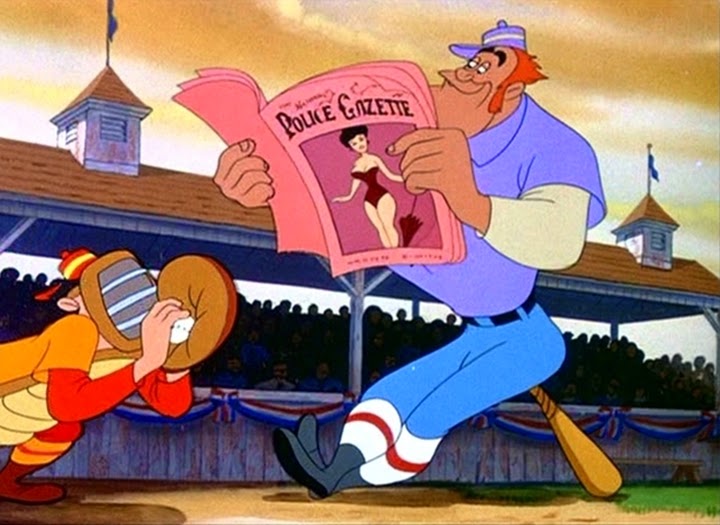 "Two Silhouettes" this song shows two live ballet silhouettes of dancers dancing with animated characters and backgrounds. I didn't remember this video.. so I was surprised to see two live ballerinas dancing.  It was neat.  Different.  I could tell the graphics were old fashioned but it was still neat to see.  I also really enjoyed this song. 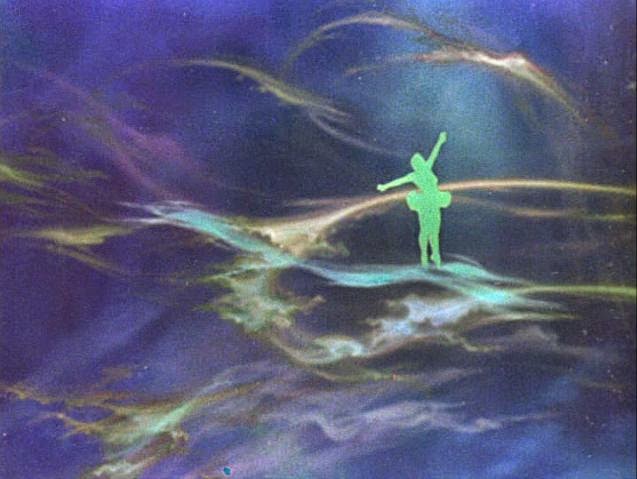 "Peter and the Wolf" this is the last video that has a source material. It is a composition written by Prokofiev that is spoken by a narrator accompanied by an orchestra.  In the original story.. Peter goes outside and the duck that lives in the yard goes swimming in a pond.  There is a bird outside also who starts arguing with the duck. There is also a cat who is stalking them. Suddenly the boy's grandfather comes outside and tells him to get inside the house and tells him "suppose a wolf came out of the forest". Soon a wolf does come out of the forest.  The duck excitedly jumps out of the water so the wolf catches him and eats him. The bird and cat get out of the way. The boy jumps up the tree and has the bird fly around the wolf head to distract him. The boy wraps a noose around the wolf's neck.  Some hunters come by and the boy has them help him take the wolf to a zoo.  In the Disney edition the story is of course much more for kids.  The animals all get names, the duck lives, The boy knows the wolf is coming so he carries around a pop gun, and the hunters all get names as well.  I loved this short as a kid and still liked it today.  It was one of the songs that introduced me to classical music.  I wish I could see this live since I love going to the symphony. I wish I could post the Disney version too but it's not on Youtube.


"After You've Gone" is a short where the instruments come alive and dance around. This reminds me of some of the shorts we do see in Fantasia. 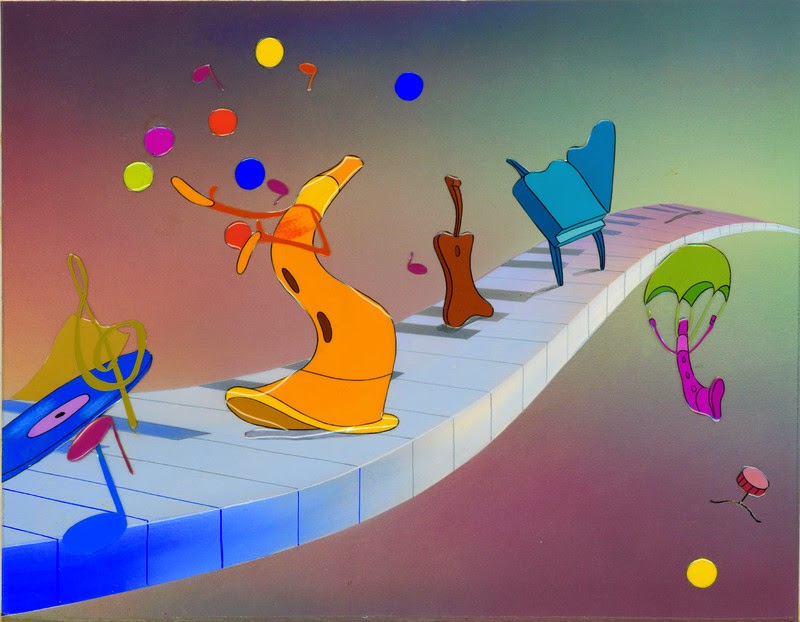 "Johnnie Fedora and Alice Bluebonnet" is my favorite of this entire movie of shorts. I really loved this one when I was young.  It just brings out so many feelings in me! It's a romantic story about two hats that fall in love in a hat shop.  Alice Bluebonnet gets purchased so they get separated and so Johnnie Fedora looks for her forever.  They do eventually meet up but it is a tough journey. I mean this SONG!!  I just love it.  Luckily.. this video is on youtube so I can share it with you.


"The Whale Who Wanted to Sing at the Met" is way sad!!!  UGHH.. I remember this one from being a kid as well. There is a legend spread through a town about an opera singing whale. So Tettie Tattie goes out to find this whale and save the opera singer that the whale ate.  Well we know the whale didn't eat anyone.. he is just a fabulous singer! Willy (the whale) learns from his seagull friend that the town is looking for him.  They believe he will be discovered and made famous and travel the world singing. Tettie Tattie does end up killing Willy (so sad) but at the end of the short we see Willy singing away in heaven.  Even though Willy dies.. it is still one of my favorite shorts in the film. 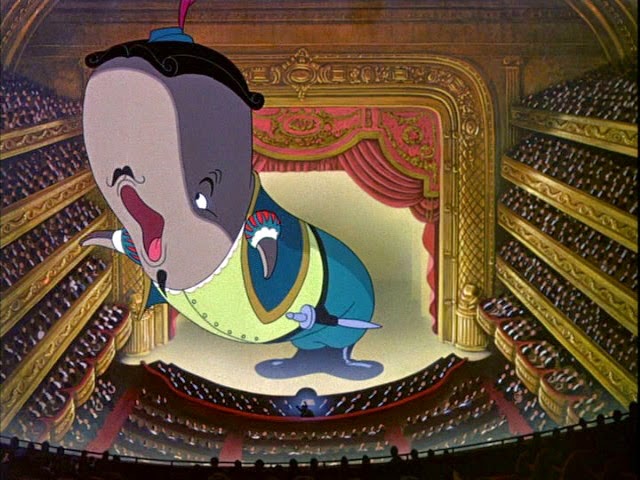 I really didn't get to read a book for this Project Disney but I did enjoy seeing some of these shorts I hadn't watched in a while. Learning about Hatfields and the McCoys and seeing the performance of Peter and the Wolf was fun too. I would recommend you finding this video and watching it. Hopefully it gets re-released soon. The music is a great mix and totally different then what you see on the Fantasia movies.  Have you watched this movie?  Which video is your favorite?

Be sure to check out my other Project Disney:
Snow White
Cinderella
Peter Pan
Treasure Planet
Sleeping Beauty
The Great Mouse Detective
The Hunchback of Notre Dame
The Princess and the Frog
Pinocchio
Fantasia
Beauty and the Beast
Lady and the Tramp
Alice in Wonderland
The Rescuers
The Rescuers Down Under
Tangled
Oliver and Company
Mulan
The Little Mermaid
Bambi
101 Dalmatians
Frozen
Fantasia 2000
The Jungle Book
The Emperor's New Groove
The Sword in the Stone
Aladdin
Atlantis
The Aristocats
The Lion King
The Many Adventures of Winnie the Pooh (1977)
Winnie the Pooh (2011)
Robin Hood
Hercules
Pocahontas
Dumbo
The Black Cauldron
Mary Poppins
Lilo and Stitch
The Adventures of Ichabod and Mr. Toad
Tarzan
Fox and the Hound
Melody Time
Posted by Angela's Anxious Life at Friday, August 22, 2014