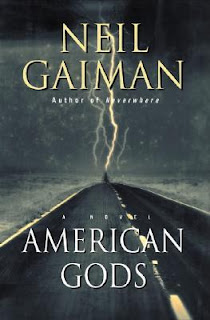 American Gods by Neil Gaiman
I listened to this audio book on another one of my roads trips.  This book is crazy.  I didn't even know what was going on half the time.  Here is the goodreads description:

American Gods is Neil Gaiman's best and most ambitious novel yet, a scary, strange, and hallucinogenic road-trip story wrapped around a deep examination of the American spirit. Gaiman tackles everything from the onslaught of the information age to the meaning of death, but he doesn't sacrifice the razor-sharp plotting and narrative style he's been delivering since his Sandman days.

Shadow gets out of prison early when his wife is killed in a car crash. At a loss, he takes up with a mysterious character called Wednesday, who is much more than he appears. In fact, Wednesday is an old god, once known as Odin the All-father, who is roaming America rounding up his forgotten fellows in preparation for an epic battle against the upstart deities of the Internet, credit cards, television, and all that is wired. Shadow agrees to help Wednesday, and they whirl through a psycho-spiritual storm that becomes all too real in its manifestations. For instance, Shadow's dead wife Laura keeps showing up, and not just as a ghost--the difficulty of their continuing relationship is by turns grim and darkly funny, just like the rest of the book.

Armed only with some coin tricks and a sense of purpose, Shadow travels through, around, and underneath the visible surface of things, digging up all the powerful myths Americans brought with them in their journeys to this land as well as the ones that were already here. Shadow's road story is the heart of the novel, and it's here that Gaiman offers up the details that make this such a cinematic book--the distinctly American foods and diversions, the bizarre roadside attractions, the decrepit gods reduced to shell games and prostitution. "This is a bad land for Gods," says Shadow.

More than a tourist in America, but not a native, Neil Gaiman offers an outside-in and inside-out perspective on the soul and spirituality of the country--our obsessions with money and power, our jumbled religious heritage and its societal outcomes, and the millennial decisions we face about what's real and what's not.


OY! This book! So for me this book did not work. I wouldn't have even have finished it if I hadn't been on a long road trip and brought this audio book to listen to. I have read Gaiman before, Coraline, The Graveyard Book, Stardust, and Neverwhere. I enjoyed all of them. I have tried Sandman but didn't really like that one. I thought for sure I would enjoy this book. Everyone I know (well on goodreads) loves this book. It must've went straight over my head. I have to say it is a good thing I have read other books of his or this one would've turned me off from his writing. I have noticed for me some of his books are great and others are just well all over the place.

For me this book just had plot lines everywhere. One minute we are reading about some slaves that were sold and follow their story (I have no idea why) and the next minute we are following out main character Shadow around). Apparently, after reading a lot of reviews on this book there is a lot of deeper meaning to this book about America. Those types of books are not for me. I just want to read a story and not have to figure out what it is symbolizing. I thought this book was going to be more magical and have an epic battle of gods at the end. Nope none of that.

One of the reasons I really wanted to get this book read was because of the rumors that it's going to be a 6 season series on HBO. I don't even see how this is going to be successful on there. I can't decide if it's because I was listening to it on audio and not reading it. Though I did listen to Under the Dome by Stephen King and thought that was fantastic.  After listening to this audio and reading all the reviews I feel a little... well dumb.  Like how did I not get out of this book what everyone else go out of it.

I don't know whether to recommend this to people or not.  Lots of people love it... I loathed it.  I am still confused about what I just read!!!

Thunder is booming!! Run inside and don't bother reading!