Project Disney: The plan is to tackle all of the Disney films, re-reading the classic stories and tales that inspired many of them and to look at how the changes the filmmakers made, the new elements they introduced and the essential elements they kept. We will, of course, be talking about the films as movies as well, saying why we enjoy them and what some of our favorite moments are, but our focus will be on looking at them as adaptations. For the films that are not drawn from any one work we’ll be looking at some of the possible literary influences that we see in the stories. Inspired by Project Disney hosted by Picture Me Reading
This week's Project Disney is The Rescuers movie based of the book The Rescuers by Margery Sharp.  I was excited for this one because I haven't seen the Rescuers but maybe once or twice so I wanted to watch it again.  I have to say the different between the book and the movie are interesting.  In the movie the mice are apart of a Rescue Aid Society (in the book they are the Prisoners Aid Society).  So... in the movie the mice rescue orphans and in the book they rescue prisoners.  I loved this book.  It was soooo good.  Surprisingly good.  Where the movie I didn't enjoy so much.


The book's characters are fun.  There are actually 3 mice on the journey and they go to a prison  The book is about a society of mice whose job it is to rescue prisoners.  There is a prisoner in an impossible prison called the Black Castle and the three mice go on many adventures to get there and free him.  We get to follow their journey which includes cats, sadness, and love!  In the end of the book.. all the mice go their separate ways back to the homes where they came from.  The illustrations in the book are beautiful too! This is how I realized the mice in the book don't wear clothes..HA! I am going to continue with this series! 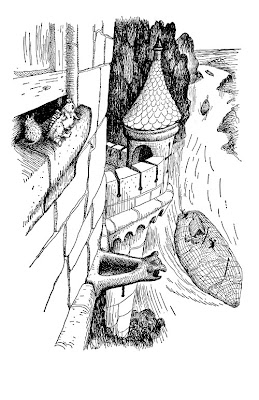 The movie on the other hand is very different.  There are two mice, Bernard and Bianca who are out to rescue orphans.  A little girl, Penny, drops a letter in a bottle in the river asking for help and the mice get it. I like her and her cat friend Rufus.  Disney does a really touching scene between the two of them in film.  The mice go to find her only to discover a villain named Madame Medusa has captured Penny. Medusa wants a jewel which Penny can find.   The villain is interesting ... though not my favorite. 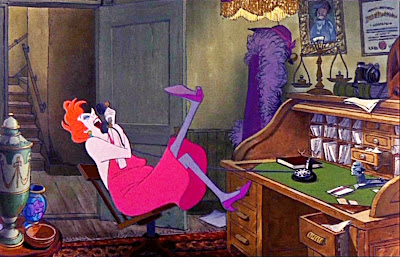 I think the plot of the movie was a little messy.  Next up we chase the jewel.. and eventually the animals save Penny.  She is adopted and the jewel is given to the Smithsonian. I will probably watch the movie again soon.  Maybe I wasn't paying enough attention to it?  As I do more research on this.. it looks like I should've read book 2 Miss Bianca in preparation for this film.  In that book they do rescue an orphan.  I have it on hold at the library now and will probably update this post once I read it.

What do you think about this movie?  It is really not as popular as the rest which is too bad.

PROJECT DISNEY:
Snow White
Cinderella
Peter Pan
Treasure Planet
Sleeping Beauty
The Great Mouse Detective
The Hunchback of Notre Dame
The Princess and the Frog
Pinocchio
Fantasia
Beauty and the Beast
Lady and the Tramp
Alice in Wonderland
The Rescuers Down Under
Tangled
Oliver and Company
Mulan
The Little Mermaid
Bambi
101 Dalmatians
Frozen
Fantasia 2000
The Jungle Book
The Emperor's New Groove
The Sword in the Stone
Aladdin
Atlantis
The Aristocats
The Lion King
The Many Adventures of Winnie the Pooh
Winnie the Pooh (2011)
Robin Hood
Hercules
Pocahontas
Dumbo
The Black Cauldron
Mary Poppins
Lilo and Stitch
The Adventures of Ichabod and Mr. Toad
Make Mine Music
Tarzan
Fox and the Hound
Melody Time
Posted by Angela's Anxious Life at Friday, August 09, 2013