The 39 Clues Day of Doom by David Baldacci-Review 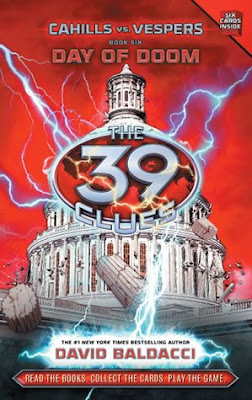 Day of Doom by David Baldacci

Finally I am finished with all the 39 Clues books.  YEAH YEAH!  Party!  These books have been a fun journey.  I am so glad I came across them in the bookstores.  Here is the goodreads description:

The Ultimate Sacrifice
It started with a kidnapping. A shadowy organization known only as the Vespers snatched seven members of the Cahill family and demanded a series of bizarre ransoms from around the world. Thirteen-year-old Dan Cahill and his older sister Amy began a global treasure hunt, determined to bring back whatever Vesper One needed, so long as it kept the hostages safe.
But when they deliver the last ransom, Amy and Dan discover Vesper One’s terrifying endgame. The objects he demanded are vital pieces in a Vesper plot that will harm millions of innocent people. Now the two siblings and their friends are in an all-out sprint to stop Vesper One . . . before the whole world goes BOOM.
In this final volume to The 39 Clues: Cahills vs.Vespers series. Baldacci will have you on the edge of your set to see what will happen.

I am so glad I am done with this series.  Though I will admit it ended a little over dramatic.  Now that the series is done I still don't believe that it needed to continue.  If you don't know what I am talking about, the 39 Clue was originally 10 books.  They were good.  Then the series continued with 6 more books called the Cahills VS Vespers (and a book that took place in between the two series).  I think that Scholastic was just trying to make more money off a good thing.  Kind of like all those Young Adult trilogies out there that don't really need to be a trilogy.

I was also disappointed that this series added a love triangle.  Do we always have to get a love triangle???  The characters by the end of the Cahills VS Vespers series are just totally different then the ones we got to know before. People want to KILL people and then two chapters later don't want to KILL them?  I know that sometimes I want to punch people and then I don't want to but that's totally different then killing someone.

Also in this book there is suddenly a machine to kill the world.  Throughout the series of the Cahills VS Vespers we have been collecting items from all over the world.  Not sure how I feel about them all of a sudden turning into pieces for a big old machine.  It is a hard thing probably to end a series like this when there are all different authors writing each book.

THEN I FIND OUT THIS.. The third series, Unstoppable, was revealed in Publishers Weekly on October 25, 2012. Nowhere to Run, the first book in the series, will be released October 1, 2013.  Jude Watson wrote the story arc for this series. A 2nd book called Breakaway will be released in January 2014.