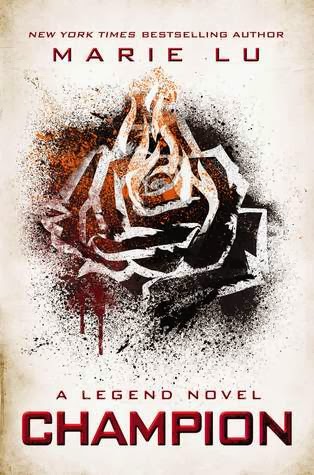 Champion by Marie Lu
I have been trying to read this every since this book came out!  I received it from the library when it first came out but only read half of it before it was due back.  I only just got the book again and almost didn't finish it this time around either.  Here is the goodreads description:

June and Day have sacrificed so much for the people of the Republic—and each other—and now their country is on the brink of a new existence. June is back in the good graces of the Republic, working within the government’s elite circles as Princeps-Elect, while Day has been assigned a high-level military position. But neither could have predicted the circumstances that will reunite them: just when a peace treaty is imminent, a plague outbreak causes panic in the Colonies, and war threatens the Republic’s border cities. This new strain of plague is deadlier than ever, and June is the only one who knows the key to her country’s defense. But saving the lives of thousands will mean asking the one she loves to give up everything. With heart-pounding action and suspense, Marie Lu’s bestselling trilogy draws to a stunning conclusion

Yes! Another trilogy done. Though, like I said, I started this way back in November. I don't know what it is about this book... but I didn't feel the need to finish it. I was just going slow reading along. This book series has been a fun ride though.  Marie Lu does an excellent job of writing.  It's like practically reading a movie script, similar to the Hunger Games type of writing I think.   Lots of action and suspense in the book.

The last book in this series we find the Colonies and the Republic finally coming to some type of agreement.  One of my favorite things in Champion is that we actually get to leave America and go to Antarctica and see how the rest of the world is.  Clearly when we leave and see America it is a third world country basically.  Totally unlike America we are used to now.  I still like the characters in this book.  Day, June, and Anden.  The author is a great character writer.  This time around though I did think Anden just got the brush off.  Poor guy.  Sometimes I think he should've been the guy for June, though from the start of the series we all knew it wouldn't go in that direction.

The ending of the book did surprise me.  I wasn't sure exactly where it was going go to go.  Lu didn't have to give us some crazy ending either.  She wrapped the book up pretty nicely.  I was surprised to even read a section that was "10 years later".  At first I was like.. really??, but then I was glad things weren't left up in the air.  I did like reading about what June was doing during those years.   I was a little bothered by the ending

SPOILERS:  So Day forgets June... but you would think SOMEONE would tell him about her.  He would've heard more of the story about her from someone.  I just think when he did finally see her at the end he would've known what she looked like especially since he and his brother were in Antarctica and he probably googled himself there.
END EPOILERS

OK... I just had to get that off my chest.  I think this is a pretty amazing series.  One of the best I have read.  I look forward to see what Marie Lu has in store for us in the future.