Project Disney: The plan is to tackle all of the Disney films, re-reading the classic stories and tales that inspired many of them and to look at how the changes the filmmakers made, the new elements they introduced and the essential elements they kept. We will, of course, be talking about the films as movies as well, saying why we enjoy them and what some of our favorite moments are, but our focus will be on looking at them as adaptations. For the films that are not drawn from any one work we’ll be looking at some of the possible literary influences that we see in the stories. I am participating in Project Disney hosted by Picture Me Reading! 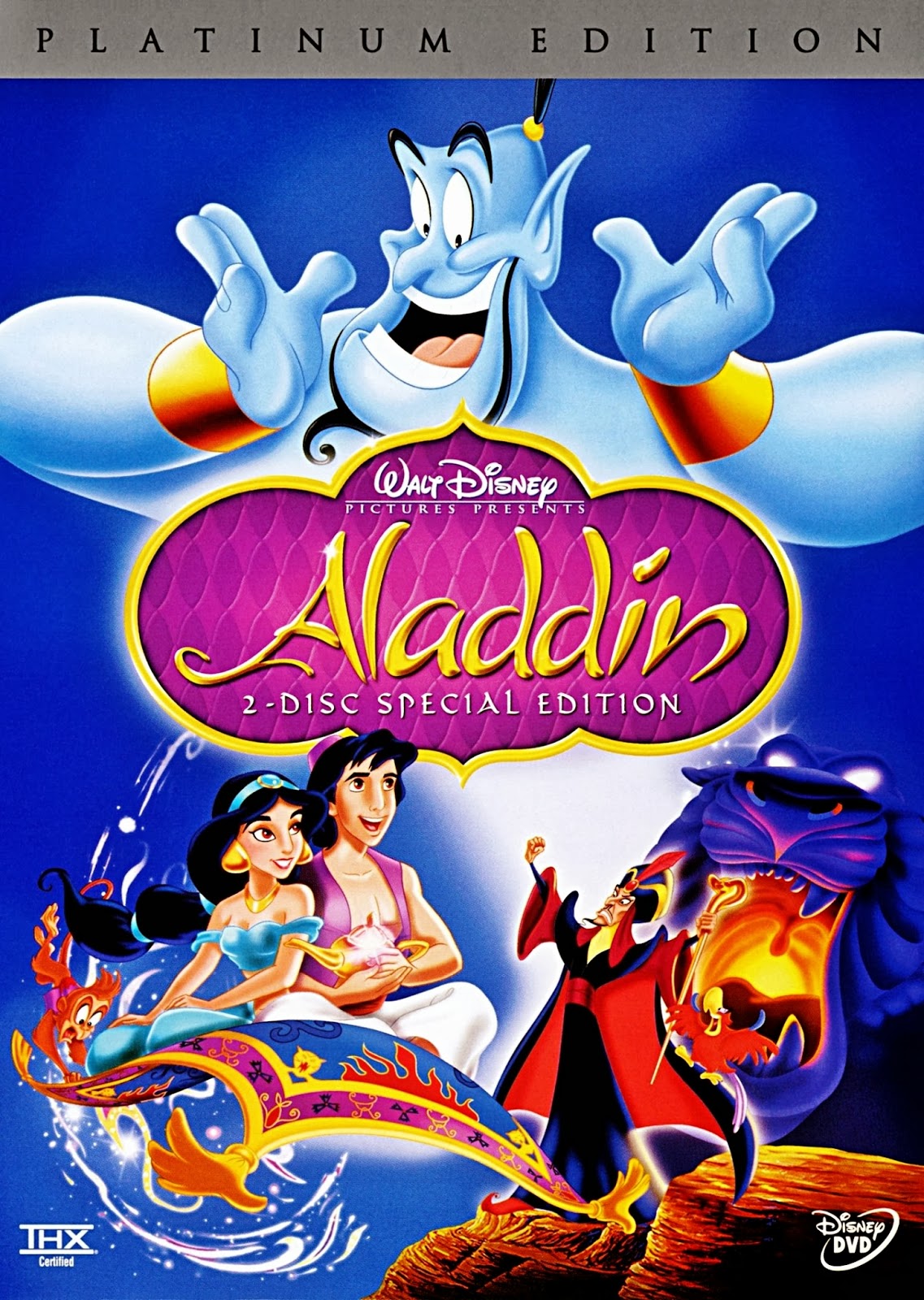 This week's Project Disney is all about Aladdin!!  Aladdin is based off the story Aladdin and the Enchanted Lamp from the One Thousand and One Night, also called Arabian Nights collection (you can read it online here).  I really have enjoyed reading Arabian Nights.  I thought that book's tales would be dated but they are well written and enjoyable. I read a few more in the book other then the Aladdin tale.  There are a few details in the story that are completely different then the movie you would be surprised.

As you may know, One Thousand and One Nights is told from a woman narrator Shahrazad who is the daughter of King Shahriyar.  The King marries virgins and then executes them the next day. He begins to run out of virgins so one of his daughters, Shahrazad, volunteers to be the king’s next “virgin”, believing she can cure his wasteful ways.  Shahrazad has her sister come to the bed chamber to say goodbye and tell her a story after she spends the night with the King. The daughter makes sure that the King doesn't hear the end of the story before morning so she is kept alive. Disney gets rid of the whole narrator part of the story... for good reason.

Now for the characters in the movie/story.  Aladdin is Chinese.  Yes you read that right. Or well... he lives in China in the story so I am assuming he is Chinese.  The story doesn't ever tell anything different. He is not an orphan.  He lives with his parents, though his father passes away when he is young.  He and his mother are close and take care of each other all throughout the story.   Aladdin comes across the lamp in the story when a African magician who tricks Aladdin and his mother into believing he is a lost Uncle to the family.  He takes Aladdin out to a trapdoor in the ground where he has Aladdin go in and retrieve the lamp.  Aladdin will not hand him the lamp when trying to get out (similar to the movie) so the magician locks him in the ground.  In the movie... I just love the Cave of Wonders.  The art work is beautiful. This is where the lamp is located in the movie.  I also love the sidekicks met in the cave.  The carpet... Abu the monkey... just fun!  The scene where Aladdin and Abu try to leave the cave is exciting.

Before locking Aladdin in the cave the magician gave him a ring and told him it would protect him.  So while in the cave Aladdin wishes he was out.. there turns out to be a jinn inside the ring.  This jinn gets Aladdin out of the cave.  Aladdin runs home and tells his mother all what happened.  She then tries to clean off the lamp so they can sell is and the other jinn appears.  These jinn are not like the Genie in the movie at all.  There are no jokes and they are terrifying to look at. There also is more then 3 wishes granted. I will say though that Robin Williams cast as the genie in the movie is spot on.

Jafar is the magician in the movie and is a great Disney villain.  His bird Iago is a great comedic sidekick as well.  Jafar has a lot more of a presence throughout the movie then the magician does in the book. Jafar tries to find Aladdin and hunts him down in the movie.  The magician in the book just leaves and goes back to Africa after locking Aladdin up.  In the book, Aladdin hears about the princess and that she will be in town.  So he sneaks to go and see what she looks like.  He falls in love with her looks and then wants to marry her.  He sends his mother to the sultan to ask for her hand and then proves himself by sending a parade of slaves with jewels. In the movie of course there is song and dance and lots of extravagance to get the sultan to allow Aladdin to marry Jasmine.

The book now has the magician return and finds the lamp in Aladdin's house.  He then takes away the princess and the castle back to Africa.  Aladdin uses the genie in his ring to get him there.  He has the princess pretend she is in love with the magician and she then slips poison into his drink and he dies.  Aladdin gets the lamp back and they all live happily ever after.   In the movie there is a huge end sequence.  A battle with Jafar who becomes a really scary genie.  When he does this though Aladdin is able to trap him and then he uses his final wish to free the Genie.

I love Aladdin sooo much.  This is one of my favorite Disney movies.  The music is so great you can just sing along with all the songs.  I love the humor in the movie too. Here are the Annie Leibovitz Disney pictures for Aladdin. 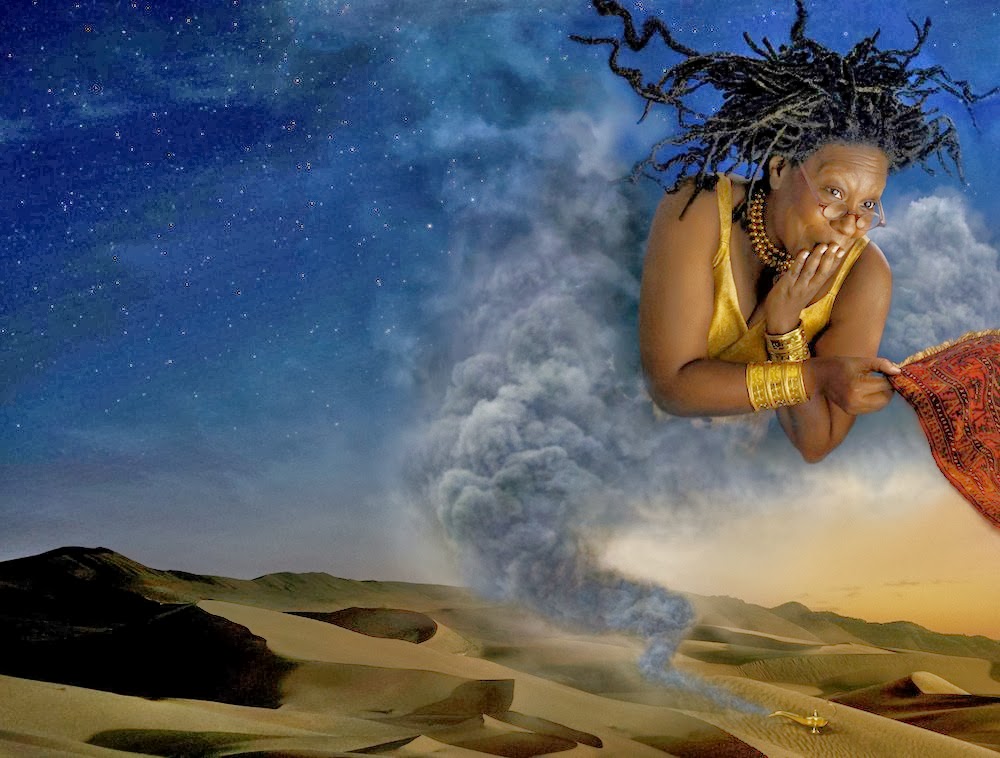 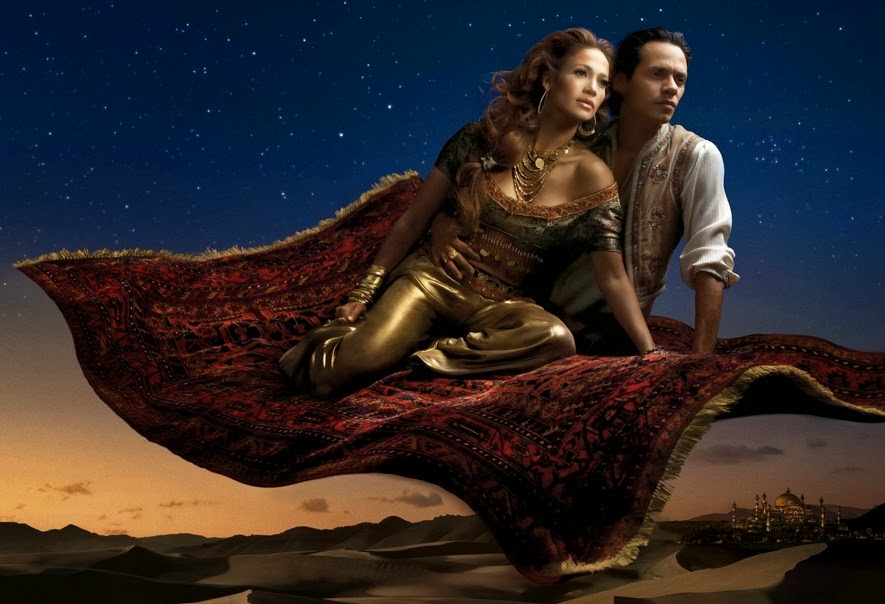 If you haven't read the story or seen the movie they are both musts. Really enjoyable!
Check out my other Project Disney:

Snow White
Cinderella
Peter Pan
Treasure Planet
Sleeping Beauty
The Great Mouse Detective
The Hunchback of Notre Dame
The Princess and the Frog
Pinocchio
Fantasia
Beauty and the Beast
Lady and the Tramp
Alice in Wonderland
The Rescuers
The Rescuers Down Under
Tangled
Oliver and Company
Mulan
The Little Mermaid
Bambi
101 Dalmatians
Frozen
Fantasia 2000
The Jungle Book
The Emperor's New Groove
The Sword in the Stone
Atlantis
The Aristocats
The Lion King
The Many Adventures of Winnie the Pooh
Winnie the Pooh (2011)
Robin Hood
Hercules
Pocahontas
Dumbo
The Black Cauldron
Mary Poppins
Lilo and Stitch
The Adventures of Ichabod and Mr. Toad
Make Mine Music
Tarzan
Fox and the Hound
Melody Time
Posted by Angela's Anxious Life at Friday, February 07, 2014