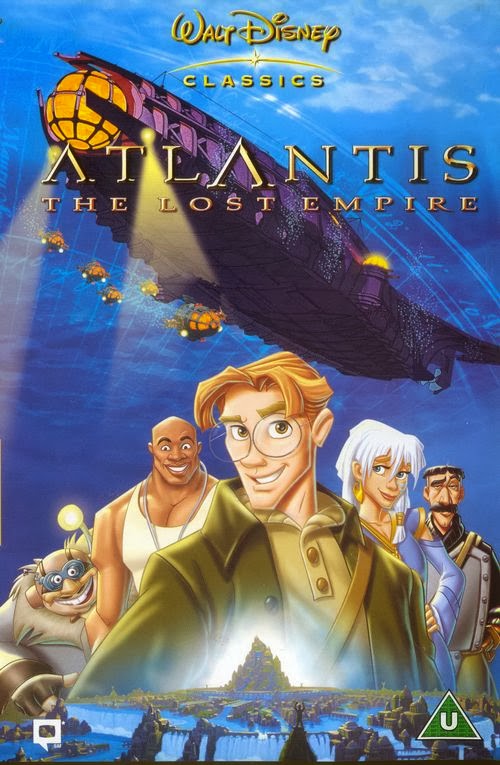 Project Disney this time around is Atlantis : The Lost Empire.  This time around it was more difficult to find the source material.  I found that there was inspiration from 20,000 Leagues Under the Sea by Jules Verne (which is a book I am glad I read for this project).  In this book though Captain Nemo and crew only stop by Atlantis for a brief period in the book.  You only see a few ruins and Captain Nemo goes during the night only allowing moonlight to reflect on Atlantis. The ship though in the Disney film Atlantis does remind me though of the Nautilus which is the submarine used in the book.

Another source of material for the movie is readings by Edgar Cayce. This man is known as a psychic who would answer questions while hypnotized.  Cayce said that there was a giant solar crystal activated by the sun which gave Atlantis power energy, which is where Disney got this idea from.  Cayce said the power crystal was used too high, causing earth quakes.  What Cayce has to say about Atlantis is quite interesting... especially that the United States would eventually find a death ray that was used on Atlantis.

Next up another source material for this Project Disney is Plato's Atlantis. For those that don't know Plato is a philosopher from ancient Greece. Plato mentions in 360 BC that Atlantis was a huge naval power and had concurred some great European and African nations.  It was destroyed when trying to concur Athens.  Plato says that Atlantis "sank into the ocean in a single day and night of misfortune."  It is because of this many people dispute whether Atlantis is real or added to Plato's tale to make it better.

Atlantis has always fascinated me. I love the tale. I remember when the Disney movie Atlantis came out I was very excited.  A character named Milo, works for the Smithsonian in Washington DC and tries to convince his employers that there is a still a power source buried with Atlantis. This stone is actually the Heart of Atlantis.  His employers will not let him explore this theory so he returns to where he lives only to discover Helga. Helga tells him that her employer Preston Whitmore would like to sponsor a trip for Milo to go to Atlantis.  Whitmore also has the Shepard's Journal which has directions to Atlantis in it.

Milo and crew end up at Atlantis and meet the people there.  Including Princess Kidagakash aka Kida, who takes Milo to her father.  Kida believes that perhaps Milo an help the Atlanteans rediscover their dying culture.  She and Milo go and explore some caves in water where there is writing in Atlantean, which she cannot read.  Milo discovers from the writings that Atlantis' power source is from the crystal.  When they come up from the water the rest of the crew is there only to reveal they are taking the crystal.  The crystal is discovered and Kida becomes one with it.  There is a little battle and most of the crew stay in Atlantis with Milo, while the evil crew take Kida away. 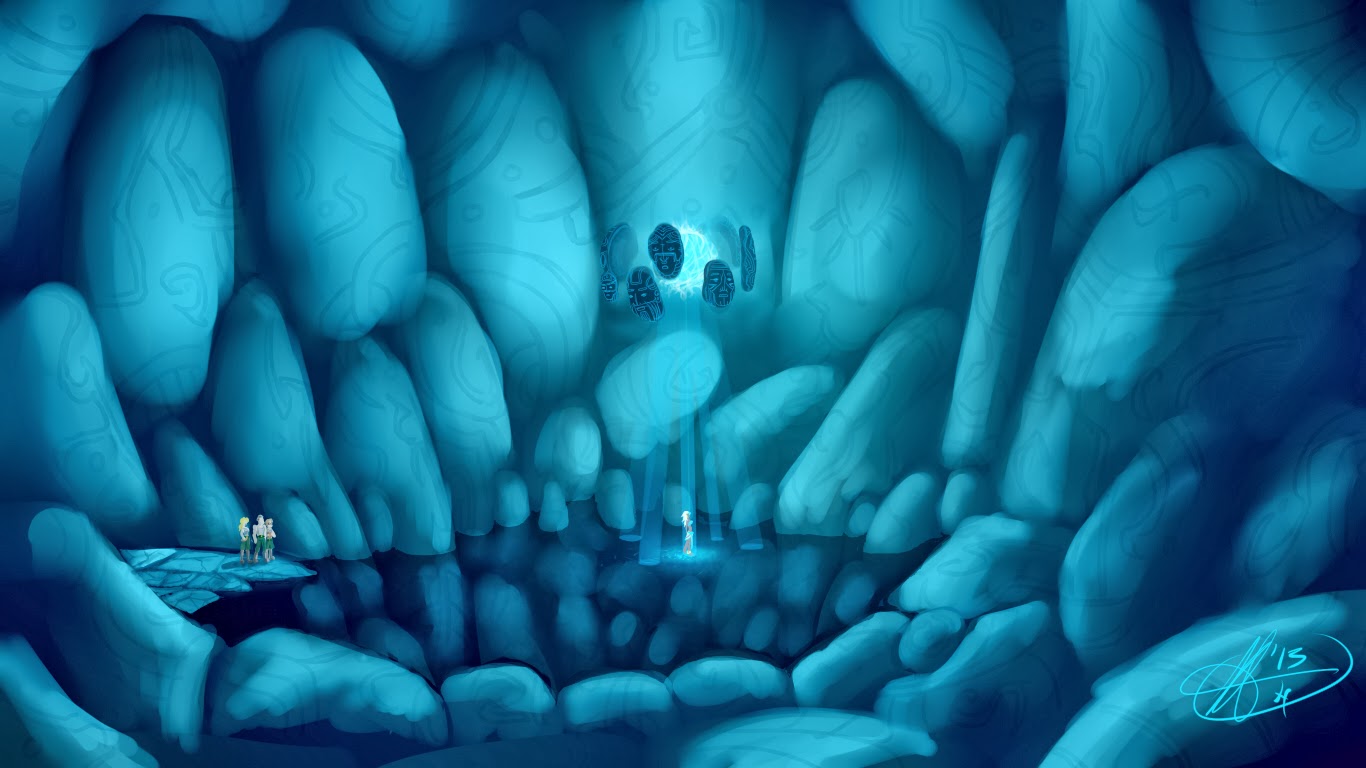 Milo speaks to Kida's dad and discovers that he was using the crystal's power to destroy nations.  The crystal become too strong for the King to control thus sinking Atlantis.  Another battle frees Kida from the crew, and Kida is freed from the crystal's power.  The crew who stayed with Milo return to the surface but Milo stays behind. He and Kida build a family and rebuild Atlantis. 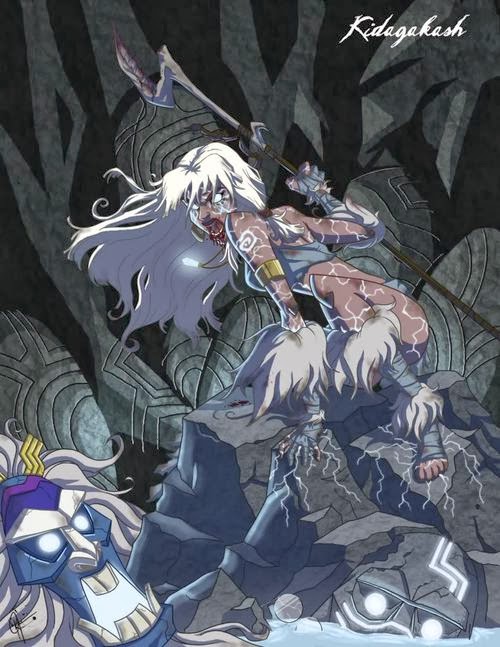 This is  not my favorite Disney movie but I enjoyed rewatching it (it's on Netflix right now).  While I like it, I don't love it.  I never really connect with the crew.. though I do love Milo's character.  I love the look of Atlantis.  Very pretty.   I think the Atlantean language is neat and Disney actually created a brand new language for the film.   A fun film to watch! 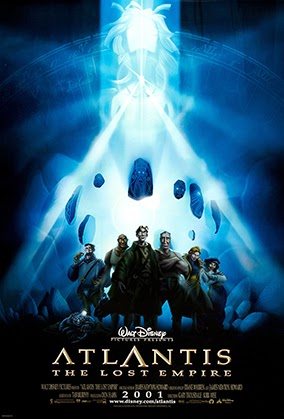 Check out my other Project Disney:
Snow White
Cinderella
Peter Pan
Treasure Planet
Sleeping Beauty
The Great Mouse Detective
The Hunchback of Notre Dame
The Princess and the Frog
Pinocchio
Fantasia
Beauty and the Beast
Lady and the Tramp
Alice in Wonderland
The Rescuers
The Rescuers Down Under
Tangled
Oliver and Company
Mulan
The Little Mermaid
Bambi
101 Dalmatians
Frozen
Fantasia 2000
The Jungle Book
The Emperor's New Groove
The Sword in the Stone
Aladdin
The Aristocats
The Lion King
The Many Adventures of Winnie the Pooh
Winnie the Pooh (2011)
Robin Hood
Hercules
Pocahontas
Dumbo
The Black Cauldron
Mary Poppins
Lilo and Stitch
The Adventures of Ichabod and Mr. Toad
Make Mine Music
Tarzan
Fox and the Hound
Melody Time
Posted by Angela's Anxious Life at Sunday, February 23, 2014