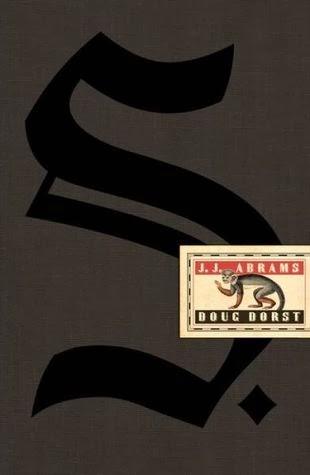 
When I first heard about S. I had to read it.  I saw pictures of it... and then pages with notes on the sides and inserts was intriguing. Plus JJ Abrams wrote it (well I found out it's his idea and Doug Dorst wrote it).  Here is the goodreads description:


One book. Two readers. A world of mystery, menace, and desire. A young woman picks up a book left behind by a stranger. Inside it are his margin notes, which reveal a reader entranced by the story and by its mysterious author. She responds with notes of her own, leaving the book for the stranger, and so begins an unlikely conversation that plunges them both into the unknown. The book: Ship of Theseus, the final novel by a prolific but enigmatic writer named V.M. Straka, in which a man with no past is shanghaied onto a strange ship with a monstrous crew and launched onto a disorienting and perilous journey. The writer: Straka, the incendiary and secretive subject of one of the world’s greatest mysteries, a revolutionary about whom the world knows nothing apart from the words he wrote and the rumors that swirl around him. The readers: Jennifer and Eric, a college senior and a disgraced grad student, both facing crucial decisions about who they are, who they might become, and how much they’re willing to trust another person with their passions, hurts, and fears. S., conceived by filmmaker J. J. Abrams and written by award-winning novelist Doug Dorst, is the chronicle of two readers finding each other in the margins of a book and enmeshing themselves in a deadly struggle between forces they don’t understand, and it is also Abrams and Dorst’s love letter to the written word

I read this book pretty quickly.  But now that I am done I am not 100% impressed.  I did borrow this from the library so when I got the copy all the inserts were in a folder in the back.  Luckily, a fellow book blogger had just posted the order of the inserts so be sure to stop by Dolce Bellezza for a pictorial guide for inserts.   It was a big help!

The book to me is really 3 stories at once.  One being a fictional story called The Ship of Theseus this story we read along with the two writers who are writing in the margins of the book. In the margins we read about a relationship blossoming between to college students who are passing this book back and forth.  There is a love story here and mystery story of trying to discover who the real author of the Ship of Theseus really is. 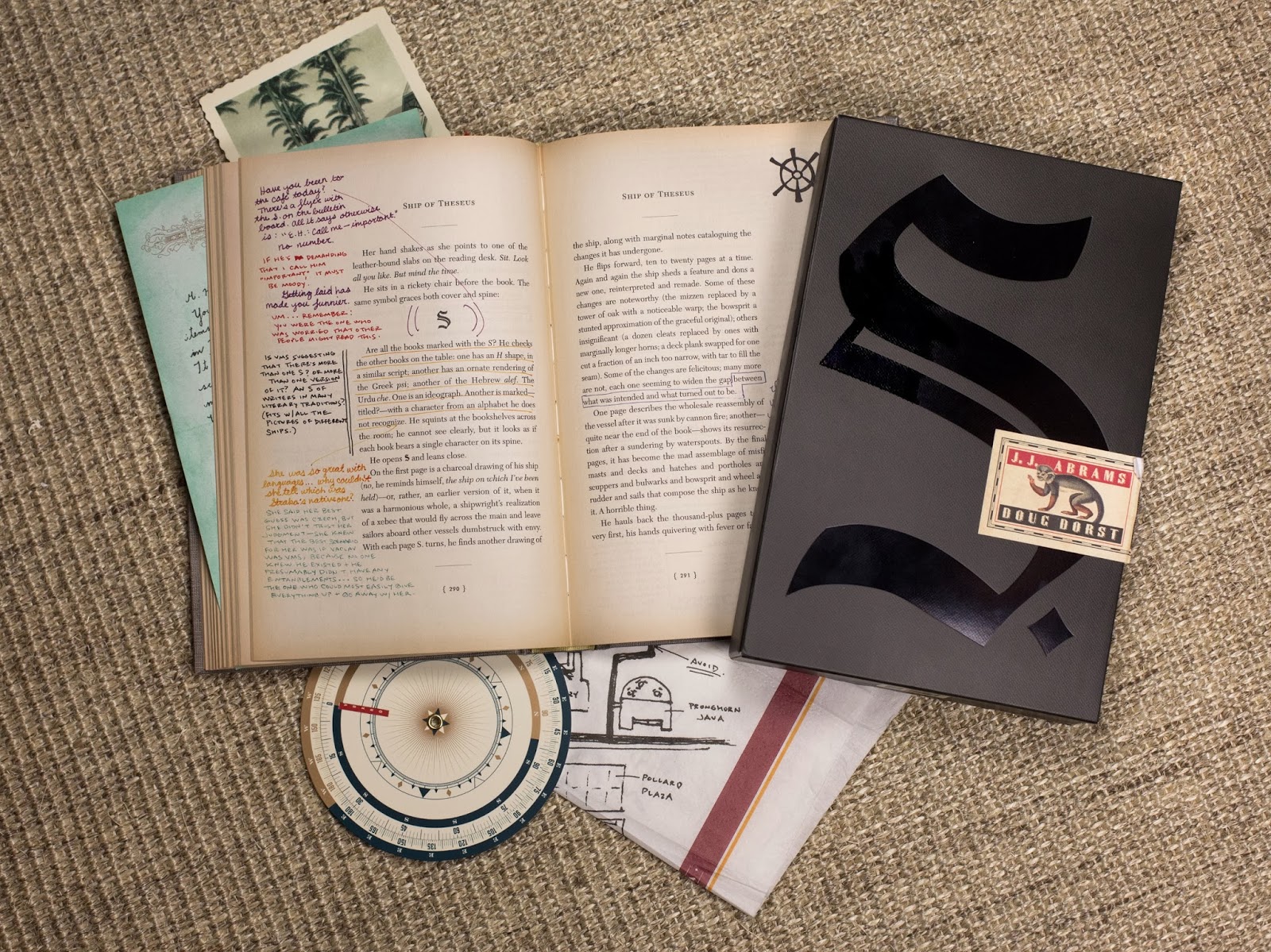 Now... when I picked up the book I just started reading along.  What I did was read two pages at a time and then the handwritten notes.  I then noticed that these notes were all written at different times.  So then I looked up how to read the book.  One Way I heard to read it was to go through a chapter at a time then go back and read black and blue. Then after you finish the book read the green and orange all the way through, then go back and read purple and red the whole way, then go back and find the black and black. I tried reading everything at once and it gave away too much. Then I read that JJ Abrams said to read a chapter then go back and read the notes in that chapter.  Look... I think you should read it how you want.  I liked the way I read it.  I liked little peeks into the future.  I am used to how Abrams does this... take Lost for example.  But I will say I had to really concentrate on this book because of this.  Thinking about what was said in what time frame.  I did go a little ahead and write the notes by color like some have suggested but to me you still have to sometimes read the passages of the book to get the notes so I still figure it was better to just read the whole thing at once.  Again.. it's your reading experience. 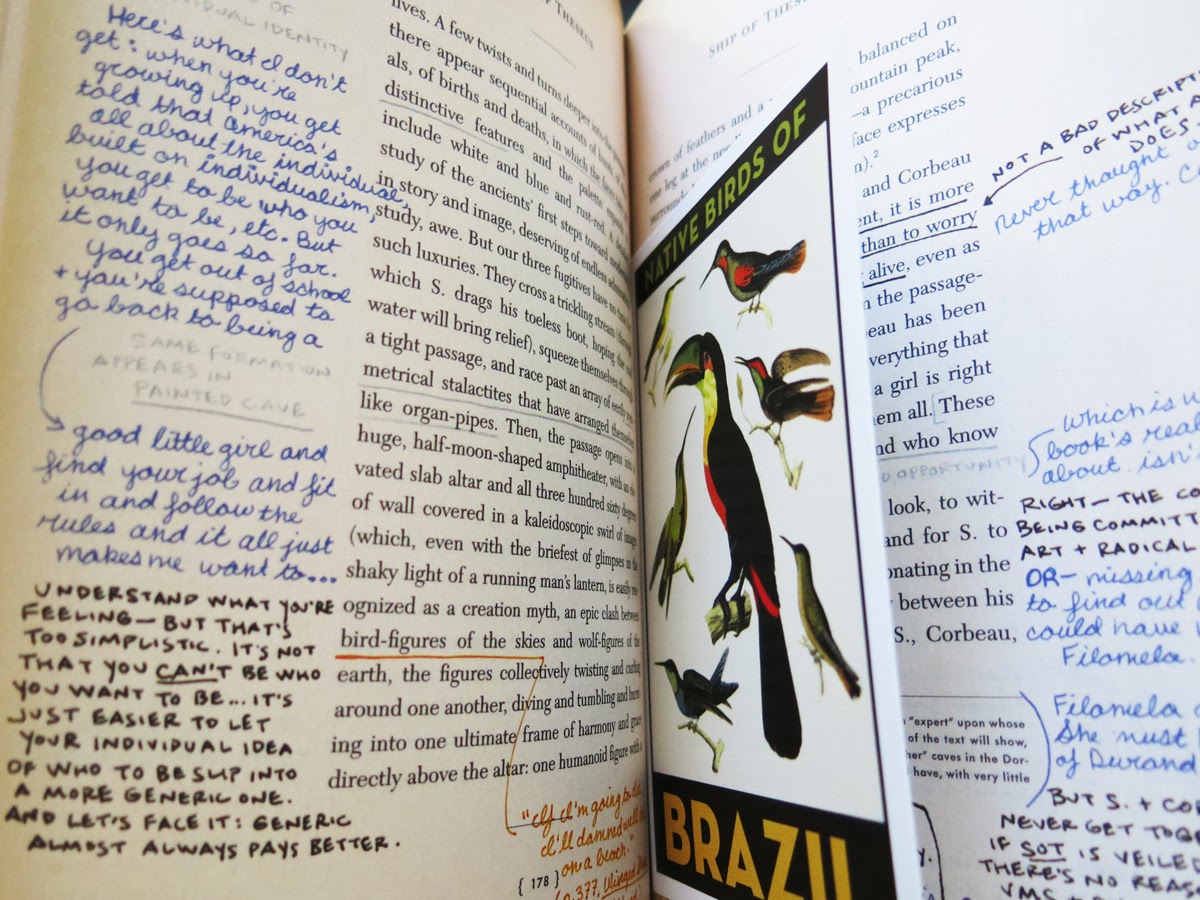 It was hard to read at first... I don't like writing in my books.  When I went to college and bought a used copy I would look all through it to make sure someone didn't write all over it.  So it was hard to get used to at first. And I have a confession, the parts of the book that were about discovering who the writer really was confused me.  So many names!  And then all those names were compared to the names in the novel (The Ship of Theseus) and I ended up kind of skimming those notes.  At the very end you aren't told who it is!! So annoying to me.  You have a wheel code breaker that you fumble around with from the clues in the book.  I didn't bother (I found the answer on the internet).  Lots of questions are not answered in this book.  You are left scratching your head all time.

Another thing that bothers me about the book is that the whole thing is built up like an epic event is going to happen (in both the real world and the the fictitious book) we get to the end and everything falls flat. I mean... i thought there was going to be... I don't know some exciting stuff just blow me away.  Especially from the hints we get from the margin notes.  And then... nothing.

Now I will say the book is really well thought out.  The story the Ship of Theseus is really neat and that is what kept me going.  I thought it was unique and spooky.  Despite the flaws I couldn't put it down. I love that the book is unique.  It's not like the normal books that you read. This book is like a piece of art actually.  I would say to NOT buy this as an ebook.... I think it should be for sure a physical book in your hands.

There are plenty of easter eggs for this book too.... I am not going to go hunting for them all.  Here are some cool websites though that you can visit and experience even more of the book. eotvoswheel , radio straka (spooky),  http://sfiles22.blogspot.com/ (so far, THE site for analysis and discussion SPOILERS at this link) http://mysteriesofs.wordpress.com/ (handy references), Unknown if from a fan or the writers http://whoisstraka.com.  Twitter Sites: @SFiles22, @RadioStraka, @dougdorst, @EricHusch and @JenTheUndergrad  .  I visited a few of these twitter accounts and then are fun.

I think this is a fun and neat read.  You really need to have the time to dedicate to it.  If you really want to go crazy you could spend a lot of time reading/looking for clues on the internet.  I am still really bummed about the ending.  I am really in the middle of the road on this book... the mystery was a little too confusing, and the ending was blah.  But then the rest of the book was amazing!


*** Make sure your Disqus ID has your blog listed in your profile so I can visit your blog back, or leave a link to your blog.  If you can't see the comments contact me.***