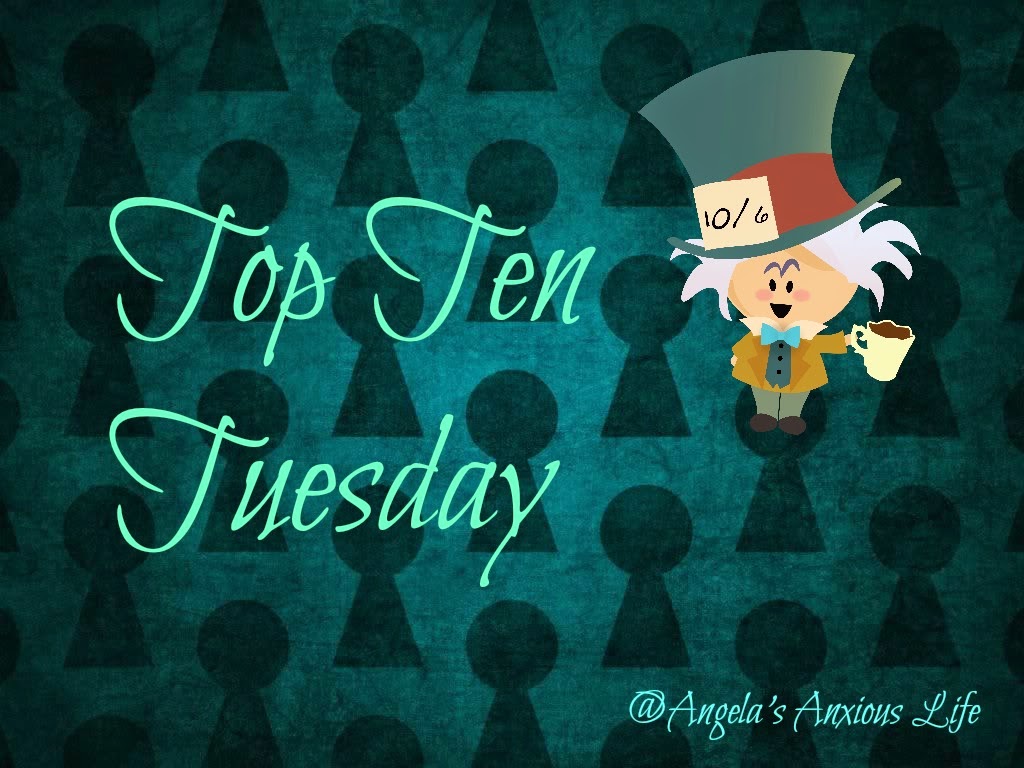 The final Top Ten Tuesday of 2014!  The week's is all about what we want to do in 2015.  I thought 2014 was great on the blog. I did fall a little behind on reviews at the end of the year... but hopefully that will pick back up here soon. The blog got a new look this year.. for those who have been following me for a while would've noticed the great make over! I got to mess around and make all kinds of new buttons and such for the blog.  After four years of blogging I am still having a lot of fun. I love finding about new books and new blogs.  So now for my blogging/reading goals:

1.  Finish series I have started!  I have a few series that I have read and then final books came out this year in 2014 and I haven't finished them yet..... I really need to finish it. In fact.. I should make a list of them so I know for sure which ones need to be read.

2.  Make a vlog???  I always throw around this idea.. I don't know.  I am just not a camera person.  But I do have a new bookcase and it would be fun to make a vlog in front of it. I always hesitate because I have to put on make up and do my hair.  BOO.

4.  Keep reading the books I own.  I just really started doing this in September of this year and it is really making me happy.  I was reading only library books and so never actually read some of the books I owned that I clearly wanted to read (I mean I did buy them).

5.  Start reading with my goodreads book clubs again.  I run two groups on goodreads.  One I would read with every month and I stopped reading along with it in September and I miss discussing books on there.  Not that a lot of people participated but it was just fun if someone did read along.

1.  Figure out something to do for a feature.  For those of you who have followed this blog you probably know about my Project Disney feature.  This is where I watch a Disney movie and read the book that the movie is based off of.  I am really close to the end.  In fact... I might actually be done with the movies in the Disney Canon.  I have a few more that I want to do but they will probably be finished before March.  I was thinking of reading the Sherlock stories and then watch the Sherlock show (BBC) that goes with the story. We'll see.

2. Design a new rating system.  I have been wanting to this but just haven't yet.  I am a little sick of the crystal balls and would like to make something that matches the Alice in Wonderland theme.

4. Get ahead on posting.  There are only a few times where I have actually been ahead on blogging.  Normally I sit down at night, watch TV and type up blog posts (like I am right now).  I would like to be able to just take a day, sit down type up a bunch of posts and be ahead for a week.  Of course.. then technically I am not ahead because they I am typing up posts for the week after that....

5. Plan another bookish monthly event.  I think I will do a Star Wars month but that won't be until next December when the movie comes out.  So it won't be for a while.. I suppose I could start planning for it now.

Well.... hopefully I get to a lot of these goals this year.  My personal goal is to take better care of myself.  I have been taking vitamins, going to the gym, putting on wrinkle cream, and getting my hair done.  Lots of personal attention in 2015!  What about you???
Posted by Angela's Anxious Life at Tuesday, December 30, 2014