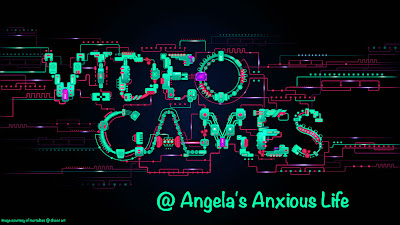 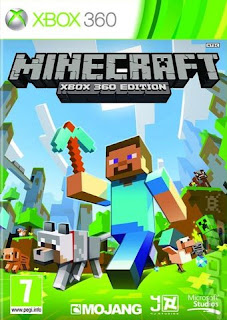 I hear people talk about this game all the time.  Lots of people just love it.  So I finally decided to pick it up from redbox.  I just don't get it.  WHAT?  I played it for a few hours by myself.  Walking around the world building things.  If you don't know much about Minecraft it's a game where you just simply go around the world collecting supplies and building objects from it.  I liked it at first when I went through the tutorial and there were objectives that I could complete.  The picture below is of the objects you can use to build things. Once I finished the tutorial though, and I was on my own I was a little bored. 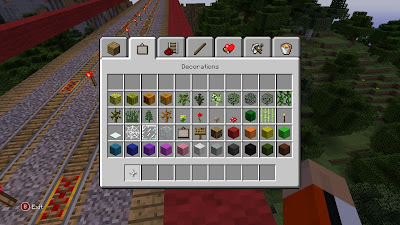 Never fear though.. I was really excited about the mutiplayer mode. I kept trying to find someone online to play with but no game was showing up that I could join.  I thought.. well that can't be.  I know a lot of people play this!  Turns out you can only play it with friends who are actually on your friends list on XBOX Live.  So my friend jumped online who owns it and we joined up in a world together.  We walked and walked.. and sort of built some stuff.  It was really laggy.  What he was doing I couldn't really see until a few seconds later.. even my own stuff I was building was lagged. 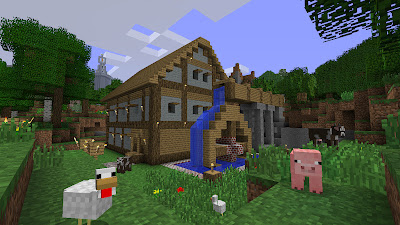 I guess people build some pretty amazing stuff.  The above house was not built by me, I wish.  I expected the multiplayer to be way different.  I thought I was going to be able to join a world where there were lots of XBOX live members playing and we would all run around together.  Yes.. these people online might be able to burn down or knock down what you built but I think they system should be set up more like Halo maybe.  If they do that you can boot them from your game.  I don't know .. this game just wasn't for me.  My friend did tell me he plays it while listening to a book on CD.

Conan O'Brian plays this video game on his show and as usual just like his other video game videos it's hilarious!!

For those of you wondering what the game play looks like that video will show you what to expect. I thought I would enjoy it a little more. I only played it for a few hours. At least I only paid $2 to rent it!