Project Disney- The Rescuers Down Under 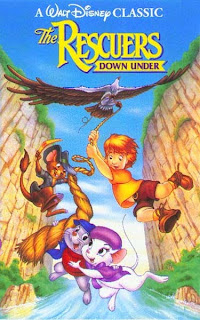 One thing about this film is that unlike the first film in the series Bianca and and Bernard don't have as much screen time like in the first film.  I read that they don't make their first appearance until 18 minutes after the movie has started. I love though the romance between the two in this film.  It is funny and romantic!   In the Rescuers Down Under there are several other characters who get scenes.. including the villain McLeach.  I love the lizard in the film who is pretty hilarious!  This film follows a boy, Cody, who lives in the Outback and is captured by a poacher who wants Cody to show him where an eagle is that he wants to kill.

A surprising factor about this movie is that there are no songs during the film.  That is just crazy to me when it comes to Disney films.  How odd it is too that Cody the main character doesn't use an Australian accent? (This reminds me of a movie I just watched Sharknado.. where the main character switches back and forth between an American accent and an Australian one.. ok just had to point that out). And speaking of .. well speaking.  Some animals speak and others don't!  Joanna and Marahute don't speak but other animals do.   I like that this Disney film has a message for it's young viewers.  The poacher for one shows how people will go out to just kill animals for their feathers (or fur). 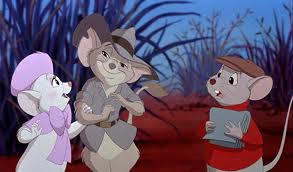 This film did not do well at the box office.  It made 47 million there.  I am a little surprised at how little it made.  Overall I enjoyed this movie and think it's good I am hoping to read through the entire Rescuers book series.

PROJECT DISNEY:
Snow White
Cinderella
Peter Pan
Treasure Planet
Sleeping Beauty
The Great Mouse Detective
The Hunchback of Notre Dame
The Princess and the Frog
Pinocchio
Fantasia
Beauty and the Beast
Lady and the Tramp
Alice in Wonderland
The Rescuers
Tangled
Oliver and Company
Mulan
The Little Mermaid
Bambi
101 Dalmatians
Frozen
Fantasia 2000
The Jungle Book
The Emperor's New Groove
The Sword in the Stone
Aladdin
Atlantis
The Aristocats
The Lion King
The Many Adventures of Winnie the Pooh
Winnie the Pooh (2011)
Robin Hood
Hercules
Pocahontas
Dumbo
The Black Cauldron
Mary Poppins
Lilo and Stitch
The Adventures of Ichabod and Mr. Toad
Make Mine Music
Tarzan
Fox and the Hound
Melody Time
Posted by Angela's Anxious Life at Friday, August 23, 2013