Project Disney: The plan is to tackle all of the Disney films, re-reading the classic stories and tales that inspired many of them and to look at how the changes the filmmakers made, the new elements they introduced and the essential elements they kept. We will, of course, be talking about the films as movies as well, saying why we enjoy them and what some of our favorite moments are, but our focus will be on looking at them as adaptations. For the films that are not drawn from any one work we’ll be looking at some of the possible literary influences that we see in the stories.  Inspired by Project Disney by Picture Me Reading. 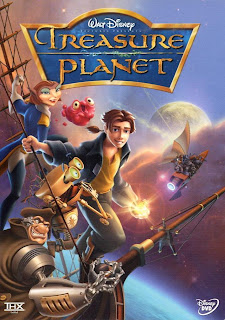 AHOY! This week's discussion is Treasure Planet vs Treasure Island.  I hadn't read the book, nor seen the movie for over 10 years so I really enjoyed this one.  It was all really new to me. I love the little songs throughout the book, "Fifteen men on the dead man's chest- Yo-ho-ho, and a bottle of rum!" The movie Treasure Planet seems to be Disney's steam punk movie.  In the movie... Jim Hawkins sales out on a boat (The letters in the name of the ship, the RLS Legacy, means Robert Louis Stevenson, the author of the original Treasure Island story. )  through galaxies trying to find Treasure Planet. 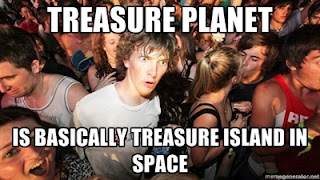 The movie does a good job I think of following the main ideas in the book. The map in the movie is now a neat little sphere that lights up at Jim's touch.  X marks the spot! John Silver is half cyborg in the movie.  I like his character in the movie but of course he's not as sinister at the Silver in the book.  In the book there is murder everywhere, and of course in the movie we are missing this aspect of the story.  One of my favorite characters Morph.. a little blob of a guy who is the comedic relief in the movie and also takes place of Silver's parrot from the book.

We eventually find the treasure and discover BEN a robot who has been stranded on Treasure Planet.  We discover that the planet is booby trapped and the crew has to escape.  Unlike the book the crew don't leave with any treasure they packed up.  Silver and Jim leave on good terms even saying goodbye and Silver gives Jim a few gems that he did manage to take from the treasure. 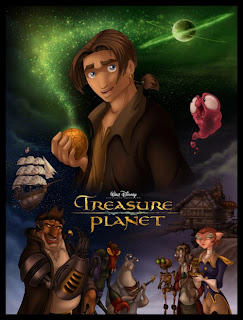 Overall I enjoyed this book and movie.  I wish I could see the exhibit for the artwork for Treasure Island.  The painting by NC Wyeth were in my book and I loved to look at them.  In 2011, the paintings went on a tour for the first time in 100 years!  Of course I missed the tour and can't find any information on when the next one will be. 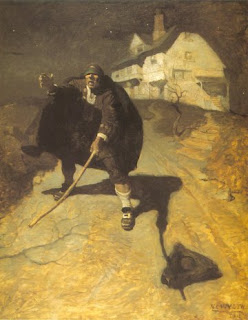 This is a lesser known Disney movie.. which I can understand why.  There is no princess, it's isn't as funny as the other movies.  Plus when it came out Pixar movies were becoming big and they were new and 2D movies where out of style at the time.  I think more people should check this film out.  Also the book Treasure Island was great.  There were times where I had no idea what anyone was talking about because there was a lot of boat terminology.  But I thought the characters were great in the book.. especially Silver.  I liked him a lot.  He was able to play his part in the world to survive.  If he needed to team up with the bad guys he did.  If he needed to team up with the good guys he did.  And he survived... a true pirate!  ARR Matey! 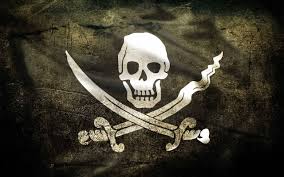 My other Project Disney:
Cinderella
Snow White
Peter Pan
Sleeping Beauty
The Great Mouse Detective
The Hunchback of Notre Dame
The Princess and the Frog
Pinocchio
Fantasia
Beauty and the Beast
Lady and the Tramp
Alice in Wonderland
The Rescuers
The Rescuers Down Under
Tangled
Oliver and Company
Mulan
The Little Mermaid
Bambi
101 Dalmatians
Frozen
Fantasia 2000
The Jungle Book
The Emperor's New Groove
The Sword in the Stone
Aladdin
Atlantis
The Aristocats
The Lion King
The Many Adventures of Winnie the Pooh
Winnie the Pooh (2011)
Robin Hood
Hercules
Pocahontas
Dumbo
The Black Cauldron
Mary Poppins
Lilo and Stitch
The Adventures of Ichabod and Mr. Toad
Make Mine Music
Tarzan
Fox and the Hound
Melody Time
Check out the host Picture Me Reading's post on Treasure Planet
Posted by Angela's Anxious Life at Friday, March 22, 2013