I love King.  I really love The Stand by Stephen King. So when I found out all these new graphic novels were coming out based on King books I was really excited.  So far there have been the ones based on the Stand (which you see here), ones based on the Dark Tower, and one based on the Talisman.  Here is the goodreads description:


Exclusive hardcover edition, collects The Stand: Captain Trips series of comics (#1-5) into one Hardcover volume. It all begins here: the epic apocalyptic battle between good and evil. On a secret army base in the Californian desert, something has gone horribly, terribly wrong. Something will send Charlie Campion, his wife and daughter fleeing in the middle of the night. Unfortunately for the Campion family, and the rest of America, they are unaware that all three of them are carrying a deadly cargo: a virus that will spread from person to person like wildfire, triggering a massive wave of disease and death, prefacing humanity's last stand.

The Stand graphic novels are amazing. Unlike the Dark Tower graphic novels which tell us a new story, the Stand re-tells the story from the novel by Stephen King.  I feel that the covers up above that were chosen to represent this series don't do it justice.  The variant covers in the back of the book are better representations of the story. 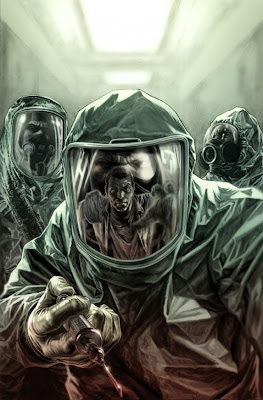 In case you don't know what the Stand is about I'll try to explain it.  It's about a super flu bug that escapes a military base and then the entire country practically dies from it.  There is a certain percentage of the population that is immune to it and these people are who the Stand is about.  It follows their story as they try to survive.  A wonderful story of evil VS good.  It is neat to follow this story with the art work.  It made me feel like the world came more alive.

King has done a lot with the graphic novel community.  He even has an online series going on right now that is free called The Little Green God of Agony which I can't wait to get started reading!  So if you want to just get a little peak into the King graphic novel world go and check that one out!


Sun is shinning!!!  Great day to go outside and read this book.
Posted by Angela's Anxious Life at Monday, March 18, 2013