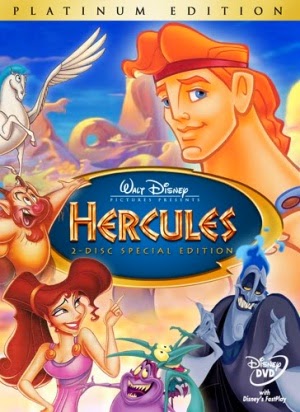 I have been waiting for Hercules on Project Disney forever!  This is one of my all time favorite Disney movies.  I will say though that this movie was harder to pinpoint the origin story for the film.  Hercules is apart of Greek Mythology, so there are a lot of stories and books that have to do with his background.  The movie of course doesn't just focus on the Hercules myth either... it includes the muses, Pegasus, Megara,  and lots of mythological monsters.  I know all the songs for this movie, and I of course watched the Hercules cartoon series on Disney channel.  I loved that show so much.. it explored way more mythology then the movie. For this Project Disney I read : Edith Hamilton Mythology and Don't Know Much about Mythology. Plus a lot of internet research.

The movie mainly follows Hercules from his birth to adulthood.  Hades discovers that Hercules will someday prevent Hades from taking over the world. So Hades makes it his mission to take away Hercules immortality.  Hades sends Hercules a drink to do this but Hercules leaves one last drop. Hercules is not allowed in Olympus anymore unless he can prove himself a true hero. Hercules is trained by Phil and falls in love with Meg. Eventually Hercules is able to prove he is a hero by saving Meg and is allowed on Olympus. So since this movie is totally not like the myths I thought we could compare the myth to movie.  I will try to talk about the myths as they appear in the movie.

The beginning of the movie has the Muses are telling us the story of Hercules.  The Muses sing gospel songs to us and just seem to love Hercules. The Muses in Greek mythology are actually daughters of Zeus. There are 9 of them and they aren't really friendly to humans... nor do they have anything to do with Hercules in mythology.

Next up Hercules is revealed to be a demi-god born to Hera and Zeus.  In the movie he is the only child of Zeus and when Hades sends his minions Pain and Panic to poison Hercules.  While they are doing this Amphitryon and his wife Alcmene walk up on them and find the baby Hercules.  They have been wanting a baby for a long time so they adopt him. In the myths Zeus actually sleeps with Alcmene and she becomes pregnant.  Zeus actually appears to her looking like her husband so she had no idea. Zeus sleeps with a lot of women and Hera is very unhappy about this (Zeus and Hera are brother and sister). Hercules is also a twin, his brother's name is Iphicles.

Next up we meet Hades.  I love love Hades in the Disney movie.  His attitude is fabulous and to be honest I think he is funny.  In the original versions Hades is actually not a scary guy (not like how Christians think of the Devil).  The Greeks think of him as just another god trying to take care of the dead in the underworld.

Hercules is first seen in the film as a young man who goes out and finds a satyr Phil to help him train for the obstacles he must go through to be allowed back in Olympus. OK as for the myth.  The reasons he ends up doing his ten famous tasks is a long story. He kills a lion that has been bothering the town of Thebes and then the king there allows him to bed his daughters.  Hercules ends up with 50 children from this!!! Hercules continues to help the town of Thebes and Hera becomes jealous of his accomplishments so she drives him mad.  He kills two of his children (at this time he is married to Megara and it's 2 of his children with her).  He goes to see the Delphi Oracle and discovers that if he completes ten tasks for Eurystheus he will be immortal again and allowed in Olympus.

Pegasus.. who doesn't love that horse in the movie.  I love how buddy buddy he and Hercules are.  So cute.  The real story of Pegasus does not have him coming from a cloud, rather he comes from the blood from Medusa's head when Perseus chopped it off. Also... Poseidon's son is the person who rides and tames Pegasus.  Earlier I mentioned Phil or Philoctetes.  In the movie he is satyr and trains Hercules.  In the myth Philoctetes does actually meet Hercules but not until the end of Hercules story.  Philoctetes is actually human and meets Hercules as he is dying.  Philoctetes lights Hercules funeral pyre.

Let's chat about Megara now. In the film Megara is seen trying to get Nessus the centaur to join in the Underworld for Hades.  In the scene Hercules sees her and saves her, which is how Hades finds out Hercules is still alive.  Megara has sold her soul to Hades to save her ex-boyfriend. So she pretty much has to do what Hades says.  Hades now hires her to lure Hercules into traps.  In the original myth Hercules murders their kids so he marries Megara off to his cousin. This is really the only time she is in the myth. Nessus on the other hand plays a huge part in the story of Hercules. Nessus steals Hercules second wife and Hercules of course beats him down because of it.  While dying Nessus gives Hercule's wife a potion to give to Hercules if Hercules does anything to hurt her.  She gives Hercules the potion when she thinks he is having an affair and it burns Hercules so bad he rips off his own skin and lays dying.

Hercules' 12 tasks (they become 12 because he supposedly cheats on two of them)  are pretty much just shown in a montage in the Disney film. We do see the Hydra of Lerna but Hercules defeats it in a different way. He gets help from his cousin who burns the necks after the heads have been chopped. The big battle at the end of the movie with the gods and Hercules battling the Titans is fun to watch.  In the film after the battle Hercules decides to stay on Earth with Megara since she can't enter Olympus.  In the myth Hercules goes to Olympus after he dies.

As you can see... Hercules has a lot going on.  I love the film though.. the music in this film is some of my favorite.  The Michael Bolton "Go the Distance" song is just amazing.  The film and the myth are so completely different this time around in Project Disney but I had fun comparing the two.  There really is a lot more information that I didn't include in this post since it was already getting so long.  I recommend you go out and read more information on Hercules.  His story is just fascinating.

Be sure to check out my other Project Disney:
Snow White
Cinderella
Peter Pan
Treasure Planet
Sleeping Beauty
The Great Mouse Detective
The Hunchback of Notre Dame
The Princess and the Frog
Pinocchio
Fantasia
Beauty and the Beast
Lady and the Tramp
Alice in Wonderland
The Rescuers
The Rescuers Down Under
Tangled
Oliver and Company
Mulan
The Little Mermaid
Bambi
101 Dalmatians
Frozen
Fantasia 2000
The Jungle Book
The Emperor's New Groove
The Sword in the Stone
Aladdin
Atlantis
The Aristocats
The Lion King
The Many Adventures of Winnie the Pooh (1977)
Winnie the Pooh (2011)
Robin Hood
Pocahontas
Dumbo
The Black Cauldron
Mary Poppins
Lilo and Stitch
The Adventures of Ichabod and Mr. Toad
Make Mine Music
Tarzan
Melody Time
Posted by Angela's Anxious Life at Friday, May 16, 2014