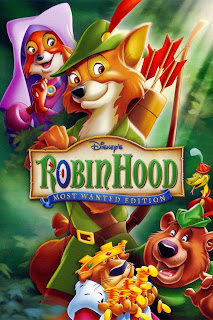 This week's Project Disney is Robin Hood based off the legend of Robin Hood.  For this movie I read The Merry Adventures of Robin Hood by Howard Pyle.  I have always loved this film so much.  The music is just simple and easy listening. It fits the film perfectly. The characters are genuinely nice.  After reading the book my love for the character Robin Hood is even greater.  It is difficult to find exact source material for the film since there are many many stories about him. Even Shakespeare references Robin Hood.  The Disney film of course uses animals instead of humans in the story.  This is just not the most popular Disney film.

The book does not have Robin Hood facing off with Prince John.  That actually happens in later Robin Hood tales in the 20th Century (this book was written in 1883 and is now as a Classic). The book I read also does not include Maid Marian.  Pyle's story collects ballads and stories and puts them into a cohesive novel.  I enjoyed reading about Robin Hood collecting his merry men, including Friar Tuck.

Robin Hood's Disney film is really about the rich stealing from the poor.  Robin Hood then steals from the rich and gives back to the poor. Well or I should say Prince John over taxes the poor and Robin Hood gives that back. We get to spend time with Maid Marian who is Robin Hood's childhood love.  Robin Hood of course thinks he can't be with Marian because she is the King's daughter, and Marian thinks Robin Hood has forgotten her since she left town for a while.  Robin Hood hears there is an archery tournament and decides to enter since Maid Marian will be giving a kiss to the winner. 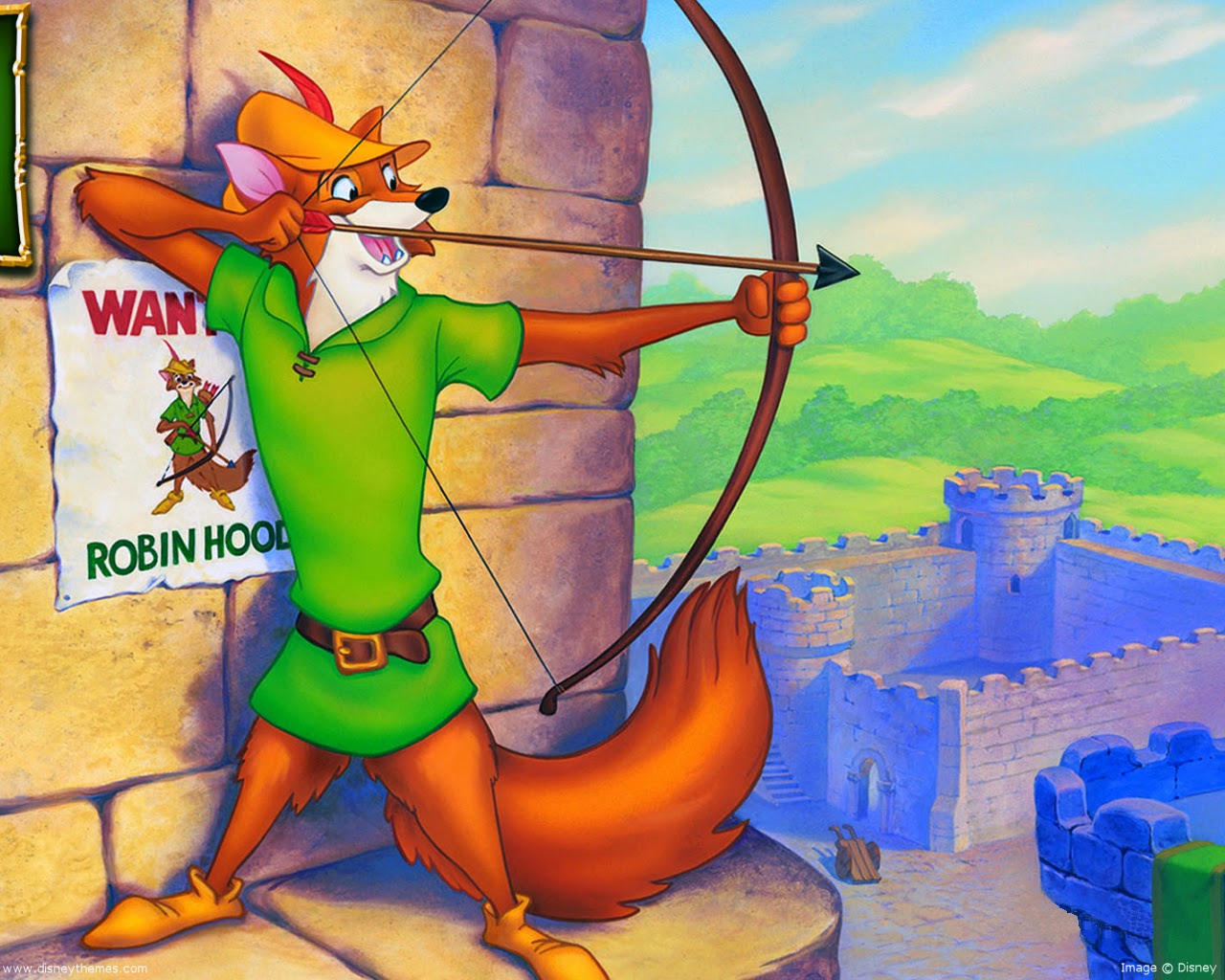 While at the tournament even though Robin Hood is in a disguise he is spotted because of his archery skills (this does actually happen in the book The Merry adventures of Robin Hood where there is a tournament and the King knows he is there). Robin Hood then runs off with Maid Marian and meets with the outlaws in the forest where he proposes to Marian.  When Prince John finds out about this he taxes the citizens even more.  I remember this part being really sad to m e as a child and honestly even now as an adult.  All the animals in the jail and there is a really sad song (Not in Nottingham) playing at the same time.  During this part of the film the guards call out the time " 5 oclock and all is well", I often quote this in my life when looking at the time.

Prince John then plans to hang Friar Tuck hoping that this will bring Robin Hood out of hiding (this is one of the fables about Robin Hood that is also mentioned in the book.  He heads to town to save one of his merry men). Of course Robin Hood runs in for the rescue and there is a great battle scene with him and the Sheriff of Nottingham. Soon after the battle King Richard returns from war and fixes everything and pardons Robin Hood. Robin Hood and Maid Marian are married at the end of the film.

One of the biggest complaints from people about this film is how much footage is used from previous Disney films.  Maid Marian's dancing is the exact same as Snow White , Little John's animation is taken from the The Jungle Book, and pieces from the The Aristocats is also used. The reuse of animation is something I can't believe was allowed but at the time they were on a time crunch so had to get the movie out. I never noticed this as a kid though so it doesn't take away from the film for me.  I wouldn't even have know about it if I hadn't research the film for Project Disney.

I think this fits those Disney movies that boys are supposed to enjoy (though I don't see why a boy can't like Beauty and the Beast right???).  I really like this film but can see why it's not one of Disney's best.  I love the folk music and the time period of the film.  I can say this movie is how I first learned about Robin Hood as a child. As far as comparing this to a book there is just so many different tales about Robin Hood I am trying to read them all!  My parents recently gave me Robin Hood on bluray since Disney finally released it and it has such a pretty picture now!

Edit:  Rachel from Rachel Turning Pages informed me in the comments that there is an alternate ending that was written for the film.   I hadn't ever heard of that with a Disney film before this... and didn't come across that in my research for this post!  Thanks!  You can even watch an animation of the Robin Hood alternate ending.

Be sure to check out my other Project Disney:
Snow White
Cinderella
Peter Pan
Treasure Planet
Sleeping Beauty
The Great Mouse Detective
The Hunchback of Notre Dame
The Princess and the Frog
Pinocchio
Fantasia
Beauty and the Beast
Lady and the Tramp
Alice in Wonderland
The Rescuers
The Rescuers Down Under
Tangled
Oliver and Company
Mulan
The Little Mermaid
Bambi
101 Dalmatians
Frozen
Fantasia 2000
The Jungle Book
The Emperor's New Groove
The Sword in the Stone
Aladdin
Atlantis
The Aristocats
The Lion King
The Many Adventures of Winnie the Pooh (1977)
Winnie the Pooh (2011)
Hercules
Pocahontas
Dumbo
The Black Cauldron
Mary Poppins
Lilo and Stitch
The Adventures of Ichabod and Mr. Toad
Make Mine Music
Tarzan
Fox and the Hound
Melody Time
Posted by Angela's Anxious Life at Friday, May 02, 2014