Aristotle and Dante Discover the Secrets of the Universe- Review 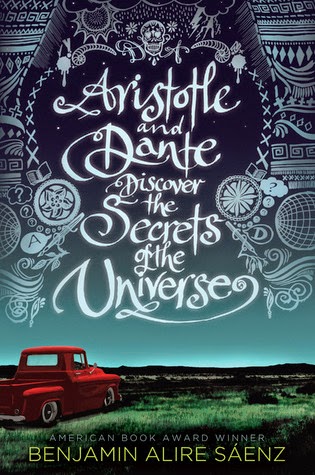 Aristotle and Dante Discover the Universe by Benjamin Alire Sáenz

I was so excited when my book club pick Aristotle and Dante Discover the Universe!  It is also perfect for this month when everyone is talking about diverse book #WeNeedDiverseBooks .  It is not only writtern by a Mexican-American but it is also a LGBT novel. I am hoping the discussions really take off this month in the book club.  I also read this book also with a blog read, I finished it the day the Read Along ended!

Here is the goodreads description of the book:

Aristotle is an angry teen with a brother in prison. Dante is a know-it-all who has an unusual way of looking at the world. When the two meet at the swimming pool, they seem to have nothing in common. But as the loners start spending time together, they discover that they share a special friendship—the kind that changes lives and lasts a lifetime. And it is through this friendship that Ari and Dante will learn the most important truths about themselves and the kind of people they want to be.

When I first heard about this book and saw people reviewing it I totally assumed it was a fantasy.  The cover artwork made me think this was going to be some sort of epic fantasy.  So I was really surprised when I discovered what the book was really about.  A couple of young boys growing up in El Paso, TX.  I actually couldn't put this book down.  I read it so fast.  Once the story took off I didn't want to lose the flow of the story telling.  I loved the two Mexican-American boys trying to find their way in the world. We read the whole book from Aristotle's perspective.  I totally related to him, even as an adult.  Questioning myself and my purpose.

I like that the characters start out as innocent boys.  Honestly the boys were supposed to be 15 but they seemed to act more like they were 12 to me. I loved that Dante was a boy who would cry, save birds, and just be gentle.  Then on the other hand we have Ari who is willing to fight anyone and keeps his emotions in check. I do think that the book didn't really have like a major plot.  We simply follow these boys through a year in their life.

The boy Aristotle discovers that he is a homosexual in the book.  The sad thing is he pretty much knew it but hid it from himself and the world because he was afraid of what others would think.   I don't know if you have ever heard the song Georgie by Rod Stewart but it is an amazing song.  It is about a homosexual man and what he goes through.  I remember my mom taking me out in the garage one night and we sat in the car and she had me listen to this song for the first time (we didn't have a CD player in the house yet.. old school!).  The end of this book reminded me of this song.  Go listen to it now.

What I enjoyed most about this novel was the growth of the characters from beginning to the end.  Not just the boys but their parents and siblings. I do wish it would've had more of a plot line going but I suppose that was not the point of this book.   I really did like this book though I didn't love it.  This quote here though was amazing: The summer sun was not meant for boys like me. Boys like me belonged to the rain.