The Merry Adventures of Robin Hood by Howard Pyle - Review 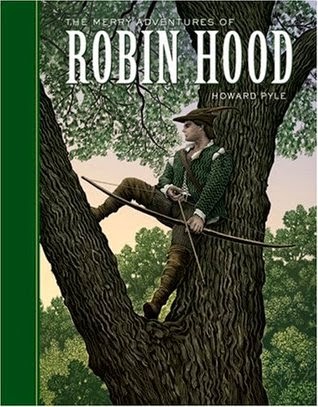 The Merry Adventures of Robin Hood by Howard Pyle

Robin Hood is one of my favorite legends.  I also have been meaning to read more classics so I was really happy to have read this book.  I read it for my Robin Hood Project Disney.  I didn't know where to go for source material for that movie but discovered this was one of the first books about Robin Hood. I thought this was a wonderful book about tales of Robin Hood finding his merry men.  The book has all kinds of his different adventures, we see him as a man with sharp knowledge and great talent with a bow.  I have recently taken archery lessons so I now know what talent it takes to hit a bullseye with an arrow.

There were some Robin Hood legends that aren't mentioned in this book that I was looking forward to.  Maid Marian is not mentioned and neither is Prince John.  I read more about that and found out that those legends became popular after this book was published. The book of course takes a while to get into like most classics do for me.  I always have to get into the flow of the language used.  Once I did though the story worked for me.  I think though some of the stories did start sounding the same after a while ... Robin meets a guy and then fights him and then guy joins the merry men.

What I liked about the book is that we get to see when and why Robin Hood becomes an outlaw.  He is headed to town for an archery tournament and runs into some bandits.  One of the bandits he shoots and kills and then has to go into hiding.  While reading I wasn't really sure why exactly he killed him but Robin feels guilty about it for the rest of his life.  We see Robin help out others and eventually goes and works for the King.  At the end of the book we read about him returning to Sherwood Forest and eventually passing away.  Though the way he dies didn't really fit with the story to me I was still sad when he did die.

The Robin Hood legend is great.  I love it so much.  I love all the movies about him and would love to read more stores based on him.