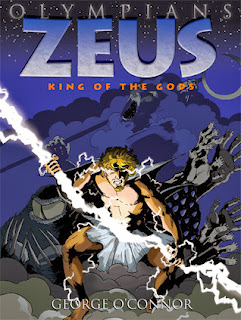 Olympians Zeus by George O'Connor
I love reading new graphic novels this one is wonderful in that it follows greek mythology.  When I first heard about the Olympians series I thought it was going to be like Disney's Hercules with it's own story and spin.. but actually this follows the legend of Zeus. Here is the goodreads description:

George O'Connor is a Greek mythology buff and a classic superhero comics fan, and he's out to remind us how much our pantheon of superheroes (Superman, Batman, the X-Men, etc) owes to mankind's ORIGINAL superheroes: the Greek pantheon.
In OLYMPIANS, O'Connor draws from primary documents to reconstruct and retell classic Greek myths. But these stories aren't sedate, scholarly works. They're action-packed, fast-paced, high-drama adventures, with monsters, romance, and not a few huge explosions. O'Connor's vibrant, kinetic art brings ancient tales to undeniable life, in a perfect fusion of super-hero aesthetics and ancient Greek mythology.
Volume 1 of OLYMPIANS, ZEUS: King OF THE GODS, introduces readers to the ruler of the Olympian Pantheon, telling his story from his boyhood to his ascendance to supreme power.

When I first started reading this I was surprised to start reading about the Titans and how earth was formed.  I was expected to read some sort of story about teen Zeus and all that. I was pleasantly surprised that it was about the greek legends.  I knew this book would be perfect for young people and a way for them to learn about the gods.

Zeus is a pretty fast read.  The art work is great too... I loved to see all the Olympians together.  I am going to go ahead and read the rest of the series.  I have always been interested in greek mythology.  I love it so much!   It just fascinates me.   Sometimes the names in the graphic novel are confusing O'Connor uses less well-known Greek pronunciation of the names i.e. Tartaros instead of Tarturus.  But it's not too hard to catch on. 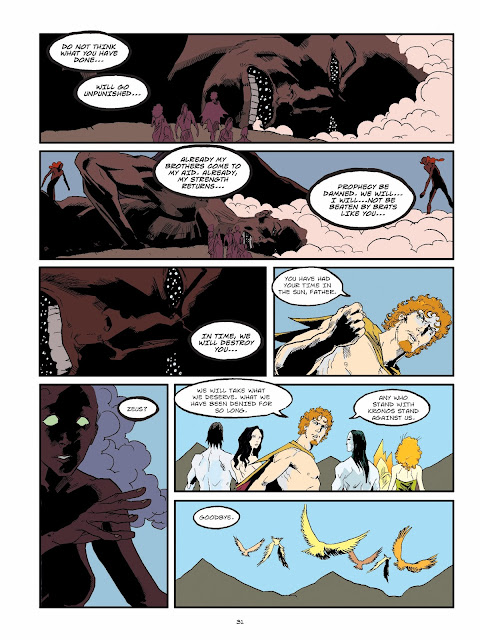 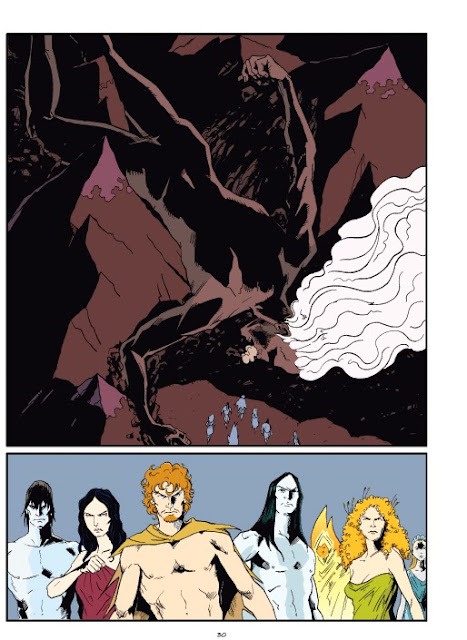 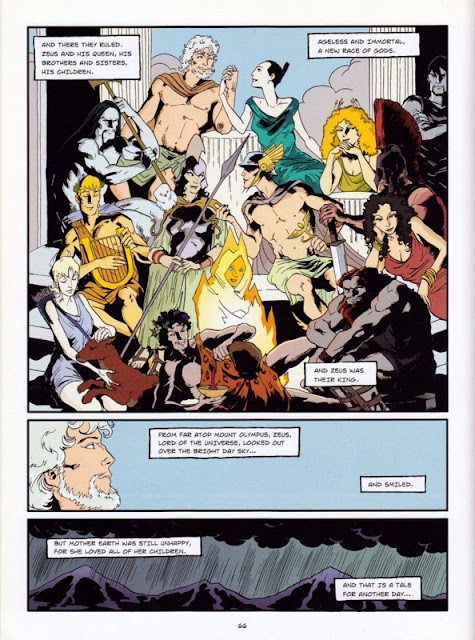 Sometimes I did find the text a little bit too forced... the gods were saying things I didn't imagine that gods would actually say.  I had to remember though that these books were written for a younger middle school aged kids.  There are even discussion questions in the back of the book for younger kids... one even reads "Zeus' dad tries to eat him.  Has your dad ever tried to eat you?" .  This question is funny and I think kids would really love it.

So far there are 6 books in the series... Zeus, Athena, Hades, Hera, Poseidon, and Aphrodite.  I can't wait to read all of them.
They crystal ball says:


Sun is shinning!!!  Great day to go outside and read this book.
Posted by Angela's Anxious Life at Tuesday, December 03, 2013