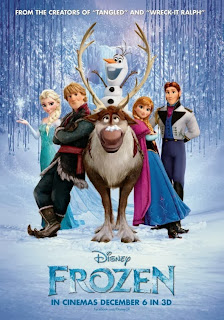 Project Disney this week is Frozen based off the story The Snow Queen by Hans Christian Andersen.  I must admit... the story vs movie are sooo different this time around.   The Snow Queen (written in 1845) is told in seven different stories. It begins with a mirror that is created by the devil which shows people the ugly side of everything.  Some demons get a hold of the mirror and attempt to take it to heaven but as they get closer the mirror falls to earth breaking into millions of pieces.  Splinters from the mirror go everywhere including into people's eyes and hearts. 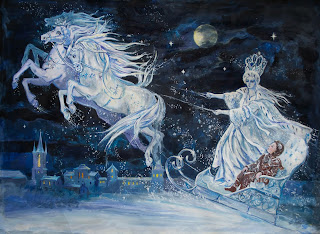 The story then follows two characters, Kay and Gerda.  Eventually a shard from the mirror gets into Kay's heart.  He then meets the Snow Queen who takes him away from his village.  Gerda notices he is missing and goes on a hunt to find him.  In the book we mainly follow Gerda who encounters a few bumps on her way to find Kay.  We never really learn why the Snow Queen takes Kay.  He is the only child in her palace when Gerda gets there.  Gerda tells Kay she misses him and her tears melt his frozen heart and they return to the village that they came from, though now they are grown ups. I find it interesting that the story by Andersen isn't really about the Snow Queen and what she's doing, it's all about Gerda's adventures.

The movie created by Disney is very different.  There are two sisters, Anna and Elsa, who are princess in a wonderful snowy land.  Elsa's parents discover that she has an uncontrollable power to create snow and ice.   One day Elsa and Anna are playing and Elsa accidentally strikes Anna with snow/ice and then Elsa begins to hide her powers so that no one knows about them or gets hurt again. As the girls age... Elsa must go to her to her coronation to become queen and shows her powers by accident to the people there.  She then runs into hiding leaving the kingdom in a frozen snowy land. 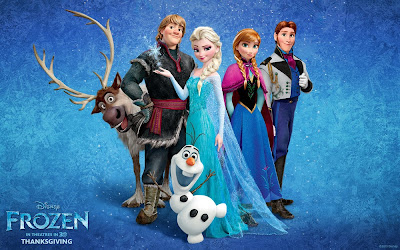 Now Anna takes most of the role in the movie.  She must go and hunt for her sister and try to convince her to fix the kingdom... only to find out that Elsa doesn't know how.  I liked the whole sister aspect of the film.  There really isn't a villain character ... Elsa is the "Snow Queen" who is born with these powers.  There is of course a prince and a love story.  Also a silly snowman.  Though I didn't find this film as funny as say... Tangled the humor was still good.  The look of Frozen in an animated wonderland was stunning to look at on screen.  The music was good too.  I loved the outfits in the film, the beautiful Russian dresses.   I do miss old animation faces from Disney movies... not these big eyes they put on film now.  They used the same type of eyes in the movie Tangled on Rapunzel. 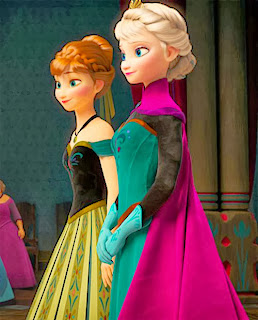 It's interesting to me that every trailer I saw prior to the film's release didn't show the princess and queen at all really.  In fact... the previews I did see only really showed the snowman.  I had no idea what this film was going to be really about before going to it.  Disney is really trying to market to a different crowd these days.   Overall I enjoyed the film, personally I liked Princess and the Frog and Tangled better (out of recent Disney films).  This film is beautiful though.. amazing animation and perfect to see in winter!

Check out my other Project Disney:

101 Dalmatians
Fantasia 2000
The Jungle Book
The Emperor's New Groove
The Sword in the Stone
Aladdin
Atlantis
The Aristocats
The Lion King
The Many Adventures of Winnie the Pooh
Winnie the Pooh (2011)
Robin Hood
Hercules
Pocahontas
Dumbo
The Black Cauldron
Mary Poppins
Lilo and Stitch
The Adventures of Ichabod and Mr. Toad
Make Mine Music
Tarzan
Fox and the Hound
Melody Time
Posted by Angela's Anxious Life at Sunday, December 01, 2013