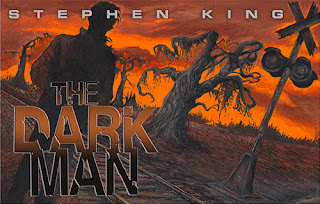 The Dark Man by Stephen King

Let's be honest.. I am a huge Stephen King fan.  So when I heard there was an illustrated book based off a poem he wrote about one of his most epic villains Randall Flagg I was in!  Here is the goodreads description:

Stephen King first wrote about the Dark Man in college after he envisioned a faceless man in cowboy boots and jeans and a denim jacket forever walking the roads. Later this dark man would come to be known around the world as one of King's greatest villains, Randall Flagg, but at the time King only had simple questions on his mind: where was this man going? What had he seen and done? What terrible things...? i have ridden rails... More than forty years after Stephen King first wrote his breathtaking poem "The Dark Man," Glenn Chadbourne set out to answer those questions in this World's First Edition hardcover featuring more than 70 full-page illustrations from the talented artist behind The Secretary of Dreams. i have slept in glaring swamps... This Cemetery Dance Publications hardcover is a true marriage of words and art, with Chadbourne pulling the images from King's imagination and illustrating them in magnificent detail. This incredible blending of King's words with Chadbourne's art creates a unique page turning experience you can return to again and again, always finding new details hidden on every page. You'll discover hidden layers and mysterious secrets for years to come. i am a dark man... So who is the Dark Man and why is he traveling the country? The answers are terrifying....

I am just not a poetry person.  I really have only ever liked Robert Frost's poems.  This was also one of those poems I didn't care for.  I have no idea what was going on!  I am sorry but King is not a poet.  I suppose if I sat here in my living room and read it aloud in a deep dark scary voice maybe it would be good:

Do these words sound like words that would create the ultimate King villain??  No way!!  The art is neat.. though a little messy.  I suppose that adds to the spooky factor of the book.  I find it sad though that the illustrator of the book isn't listed on the cover.  This book should be treated like a graphic novel, which it is, so I think the artist Chadbourne should be mentioned.  I mean.. there were several pages that didn't even have a line from King's poem only Chadbourne's art. 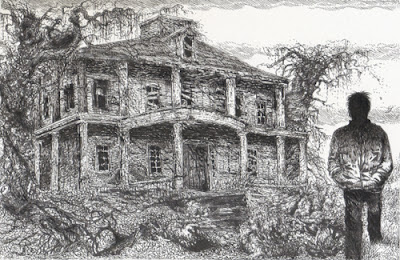 I am not really sure if this book is out for a money maker or what?  Cemetery Dance Publications usually puts out some pretty cool special edition King books.  I always love to see what they have in store for everyone.  This one though.. I wasn't too sure about.  I tried looking through the illustations for King easter eggs to his other novels.   I mean.. I thought maybe we would see Flagg in some of the locations in the novels where he visits... but I don't really think there was any. 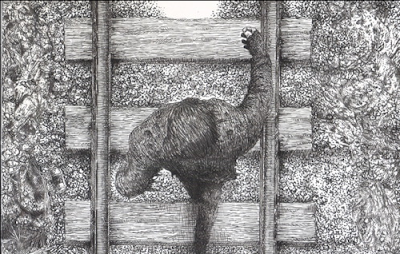 I would say pass on buying this... I mean... really it's not worth the $25 price.  Maybe if you find it at a used book store or somewhere like that it would be perfect.  The art work though it neat to look out... it is really busy but that makes it dark and cool.

Stop by the Stephen King Fans group to chat more about King ( I moderate it)!