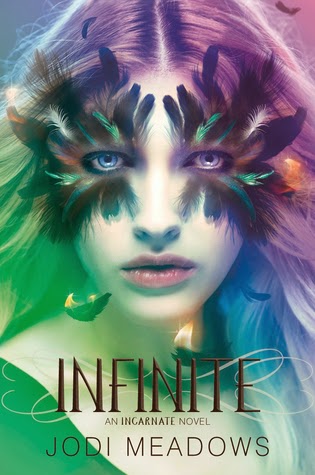 Yeah!  I finished another book series.  I initially picked up the first book in this series because of the amazing cover!  I really enjoyed the idea behind this series and am glad I read it! Here is the goodreads description:

DESTRUCTION The Year of Souls begins with an earthquake—an alarming rumble from deep within the earth—and it’s only the first of greater dangers to come. The Range caldera is preparing to erupt. Ana knows that as Soul Night approaches, everything near Heart will be at risk.
FLIGHT Ana’s exile is frightening, but it may also be fortuitous, especially if she can convince her friends to flee Heart and Range with her. They’ll go north, seeking answers and allies to stop Janan’s ascension. And with any luck, the newsouls will be safe from harm’s reach.
CHOICE The oldsouls might have forgotten the choice they made to give themselves limitless lifetimes, but Ana knows the true cost of reincarnation. What she doesn’t know is whether she’ll have the chance to finish this one sweet life with Sam, especially if she returns to Heart to stop Janan once and for all. With gorgeous romance and thrilling action, the final book in the Incarnate trilogy offers a brilliant conclusion to the compelling questions of this fascinating world, where one new girl is the key to the lives of millions

I was totally satisfied with the ending of this series.  I really liked how it was wrapped up.  I will say though that the book kind of drags in the middle.  We read about the characters walking and walking and walking some more.  That part did get a little boring.  In Infinite we get to learn way more about the dragons, slyph, and phoenix. This is one of those books that I really wanted an ARC of .. but alas I had to wait for my library to get the book.

There were a few parts in this book that made me scratch my head.  Like humans had some type of fallout and then years after that was all over mythical creatures were born and living in our world.  With no explanation as to why that happened??   One of the biggest positives for this book is no love triangle!  Though since Ana is a new soul and Sam falls for her after he has been reincarnated over and over again.  It is odd that these people (1 million of them) come back in the next life and love someone else.  Honestly I love the notion though of being reincarnated and having friends and talents that you get to use in every lifetime.  I was a little sad to learn that (spoiler) there will be no more reincarnation (end spoiler).

This is a great series and I am sad to see it go.  Jodi Meadows has done a great job with a YA series.  Making the good guy win (instead of the bad boy), making romance real, even realistic sex that isn't over the top. I do think that this was a wonderful ending to a trilogy!


Clouds are covering! A read that lets me down every now and then but peaks out of the clouds!
Posted by Angela's Anxious Life at Saturday, April 12, 2014