Cracked Up To Be by Courtney Summers Review 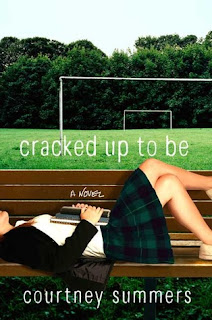 Cracked Up to Be by Courtney Summers

Just finished this book for my Young Adult Book Club and we even had Courtney Summers stop by for a Q&A!  Here is the goodreads description:

When "Perfect" Parker Fadley starts drinking at school and failing her classes, all of St. Peter's High goes on alert. How has the cheerleading captain, girlfriend of the most popular guy in school, consummate teacher's pet, and future valedictorian fallen so far from grace? Parker doesn't want to talk about it. She'd just like to be left alone, to disappear, to be ignored. But her parents have placed her on suicide watch and her conselors are demanding the truth. Worse, there's a nice guy falling in love with her and he's making her feel things again when she'd really rather not be feeling anything at all. Nobody would have guessed she'd turn out like this. But nobody knows the truth. Something horrible has happened, and it just might be her fault.

Man this book was hard to get my hands on.. eventually I was able to get it through Inter-Library Loan. I really liked this book. Not what I expected at all. I thought it was going to be like other teen books... love triangles and all that. In fact I loved it so much I am going to for sure read This Is Not a Test which is the author's new zombie book. I wonder how that one is.

I will say the last few chapters seemed rushed. They were really choppy to me. I suppose that what I did like though is that the story wasn't a happily every after for Parker, but there is hope for her. And she seemed to want a better life so I found myself hoping that for her. I also really thought the supporting characters in this book are really well written. This book is how long triangles should be!!! But I am dying to know
SPOILER!

Was the rapist/murder ever found :

I did think Baily's situation was really sudden and I wasn't too sure if that plot was needed to further this story along? I guess this is maybe to push Parker down even deeper into her depression/anxiety? I like the length of this book. I feel like if it had been any longer it would've been drawn out.

I liked this book!

If you are interested in seeing what Courtney Summers had to say to her fans go HERE  for the Q&A!