The Catcher in the Rye by JD Salinger Review 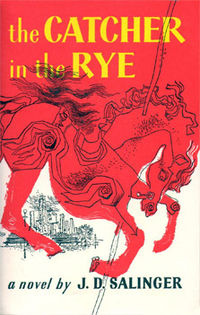 The Catcher in the Rye by JD Salinger


So I am doing a guest post for The Hopeful Heroine on banned books.  So I picked one of my favorite banned books to do a mini review on.  Please forgive me .. I haven't read this book in a while so my review might be a little off.  Here is the goodreads description:


Anyone who has read J.D. Salinger's New Yorker stories ? particularly A Perfect Day for Bananafish, Uncle Wiggily in Connecticut, The Laughing Man, and For Esme ? With Love and Squalor, will not be surprised by the fact that his first novel is fully of children. The hero-narrator of THE CATCHER IN THE RYE is an ancient child of sixteen, a native New Yorker named Holden Caulfield. Through circumstances that tend to preclude adult, secondhand description, he leaves his prep school in Pennsylvania and goes underground in New York City for three days. The boy himself is at once too simple and too complex for us to make any final comment about him or his story. Perhaps the safest thing we can say about Holden is that he was born in the world not just strongly attracted to beauty but, almost, hopelessly impaled on it. There are many voices in this novel: children's voices, adult voices, underground voices-but Holden's voice is the most eloquent of all. Transcending his own vernacular, yet remaining marvelously faithful to it, he issues a perfectly articulated cry of mixed pain and pleasure. However, like most lovers and clowns and poets of the higher orders, he keeps most of the pain to, and for, himself. The pleasure he gives away, or sets aside, with all his heart. It is there for the reader who can handle it to keep.

One thing that surprised me the second time around reading was that they first time I didn't realize that at the end Holden was in a hospital. I don't know why I guess I just mis-read it. Do you remember the characters from this book? I thought one of the important characters in the book was Phoebe. I do think Holden was extremely depressed and had it not been for Phoebe would he have had something to live for. He kept looking for friends and meaning in other people, but only Phoebe fit that hole. I didn't really feel like the language was dated... maybe just a little WARNING swear words ahead: for example no one really says christssake anymore but I suppose you could replace it with f^%^?

I really think Holden has mental illness though I couldn't tell exactly what. Depression mixed with anxiety? I think that Mr. Antonlini pushed him over the edge. Anyone would think it is weird if a mentor was petting you while you were sleeping. I don't think Holden was being paranoid. But I do think that was the point of no return, Holden's mind probably snapped at that point putting him in the hospital. I think Holden kept looking in the wrong places for comfort, and this time reading it and last time read it I always think Holden was fine in the future. I just can't help but hope he is. I also think a big difference between today's world and Holden's time is the lack of medicine. Also people who were having anxiety or depression where considered "having a nervous breakdown". Which now might be a panic attack not a break down. I don't really know if the word insane is a word to describe Holden. Insane is a little too extreme for me. I think more like mental illness, which to me is not insane. But then again I just looked up the word insane and it is defined as: 1. not sane; not of sound mind; mentally deranged. 2. of, pertaining to, or characteristic of a person who is mentally deranged: insane actions; an insane asylum. 3. utterly senseless: an insane plan. So I guess you could use that term to describe him by definition. I think that this is some of the reasons this book is banned. Because Holden has these issues it makes him different the everyone... though it would seem to me we all feel this way every now and then especially how popular this book is .

Here are some reasons why this book is banned: "The challenges generally begin with vulgar language, citing the novel's use of words like fuck and "goddam", with more general reasons including sexual references, blasphemy, undermining of family values and moral codes, Holden's being a poor role model, encouragement of rebellion, and promotion of drinking, smoking, lying, and promiscuity. Often, the challengers have been unfamiliar with the plot itself. Shelley Keller-Gage, a high school teacher who faced objections after assigning the novel in her class, noted that the challengers "are being just like Holden ... They are trying to be catchers in the rye." A reverse effect has been that this incident caused people to put themselves on the waiting list to borrow the novel, when there were none before." Read this book... it is one of the best banned books I have EVER read!! 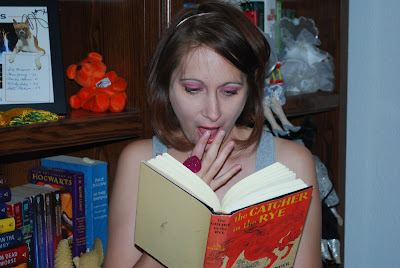