Geektastic: Stories from the Nerd Herd by Holly Black-Review 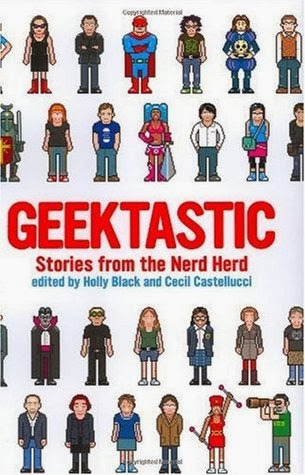 I can't believe I hadn't heard about this anthology till now!!  I love all things geek to to read a bunch of short stories about geeks I had to read this.  Here is the goodreads descriptions:

Acclaimed authors Holly Black (Ironside) and Cecil Castellucci (Boy Proof) have united in geekdom to edit short stories from some of the best selling and most promising geeks in young adult literature: M.T. Anderson, Libba Bray, Cassandra Clare, John Green, Tracy Lynn, Cynthia and Greg Leitich Smith, David Levithan, Kelly Link, Barry Lyga, Wendy Mass, Garth Nix, Scott Westerfield, Lisa Yee, and Sara Zarr. With illustrated interstitials from comic book artists Hope Larson and Bryan Lee O'Malley, Geektastic covers all things geeky, from Klingons and Jedi Knights to fan fiction, theater geeks, and cosplayers. Whether you're a former, current, or future geek, or if you just want to get in touch with your inner geek, Geektastic will help you get your geek on!

Really I think this book might get confused what is geek and what is nerd.   I do think of myself as a geek.  I have been to the San Diego Comic Con (and will be trying to get tickets again this year).  I play video games, read comics, watch all the new movies, read... blah blah.  So I thought that some of these stories were just more about unpopular kids rather then geeky kids.   After each story was a one page comic and I really enjoyed those.  I thought they were funny and geeky.   I should've probably read some reviews on this before reading it. I mean really these stories fall flat despite the authors being big sellers. 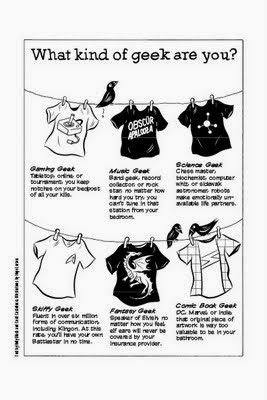 Once You're a Jedi, You're a Jedi All the Way by Holly Black and Cecil Castellucci:
The first story was only so-so to me.  I didn't think it was a great way to start off the series.  It is a story about a Star Wars cosplayer and a Star Trek cosplayer who like each other.  If you don't know this is a big deal because those two fandoms don't normally mix! This to me is the most "geek" story in the whole book.  3 stars

One of Us by Tracy Lynn
This story is about a cheerleader who goes to four geeky people for an education on all things geek.  She pays them $100 to make her geeky since her football boyfriend is into it.  So the geeks try to teach her a few things about Star Trek, Lord of the Rings, and so forth.  This story was also OK to me.  But in reality, in high school, these types of people wouldn't mix.  College is another story where people do start to hang out with different crowds.  This story here to also shows that the book is dated.. since to me it has a lot of Buffy reference, or maybe I am just not a Buffy person.  2 stars

Definitional Chaos by Scott Westerfeld
This story was more up my alley.  It's about these two people who need to get some cash to a hotel for a comic con.  I liked this story because it talks about alignments.  Good vs Evil which you find in gaming (like Dungeons and Dragons).  The story is adventurous!  3 stars

I Never by Cassandra Clare
Clare's story is about two girl friends who go to this party with a bunch of strangers who all play an online game.  This story was good but I did think it was odd people would just show up at a party of online people.  I suppose though this happens all the time.  I have seen the craigslist ads.  The online game they play though is interesting.  They pick a character.. but it movies, books, tv and roleplay it with other people in the game. The game seemed cool.  3 stars.

The King of Pelinesse by M.T. Anderson
My favorite story so far.  This one talks about a teen boy who reads some comics by an odd author who has been writing his mother letters.  The letters are about the mother and the author having an affair.  The boy travels to meet this author in person to quiz him about the affair. I thought this was one of the better stories but that may be because it wasn't so middle school like the other stories. 2 stars

The Wrath of Dawn by Cynthia and Greg Leitich Smith
This story is about two step sisters who go to a Buffy quote a long movie.  What's with all the Buffy in this book?  Anyways... they go there and there is more Buffy talk. Just can't get past that.  1 star

Quiz Bowl Antichrist by David Levithan
This story is about a Quiz Team of people in high school.  Who go to finals.  The geeky part of this story is that they all know science and book facts.  This story was more about nerds to me then geeks. Though I do like that this story is a LGBT genre and that was a neat change.  3 stars

The Quiet Knight by Garth Nix
This story is about a teen who plays LARP.  LARP is where people dress up and use weapons to fight each other.  The weapons are usually soft and made out of PVC pipes. The main character has a damaged throat so doesn't usually speak.  I enjoyed reading about the LARPing but wish the story would've focused more on that. Instead, we head back to the high school.  4 stars

Everyone But You by Lisa Yee
This story is about a girl who ends up moving to Hawaii from her small town. She is a twirler or someone who performs with a baton.  Her new school has no sports so her baton doesn't get her popular there.  She eventually gives up using her baton and never really becomes popular.  2 stars

Secret Identity by Kelly Link
This was the longest story in the book so far.  The story was good but had a lot of plot holes to me. It's about a girl who is 15 who travels to a hotel to meet some 35 year old man whom she met playing an MMORPG (which is an online multiplayer game).  She gets to the hotel and there are a few conventions going on.  A superhero one and a dentist one??  She never meets the guy, she gets drunk in her hotel room and yet that creepy guy does show up when she's wasted (she gets drunk off the minibar).  I don't know .. then we discover who the guy might be??  I just thought that it was off that a 15 year old would do any of this! 2 stars

Freak the Geek by John Green
Yet another slow story.  This one is about two girls who go to high school and they are targeted for being "nerds".  The cool people chase them with paintball guns on Freak the Geek day where the "nerds" get picked on.  OK what bothered me about this story was the spelling of Orcs.  The word was spelled Orks and I just don't know why!!! NOOO!  1 star

The Truth About Dino Girl by Barry Lyga
This story was really good... the best one in the book, till the end. I am going to spoil this one so if you are planning on reading the book.. well skip this story's review.  So this story is about two girls in high school.  One is way into dinosaurs.  She likes this boy who has a girlfriend.  Well the girl friend finds out about her crush and tells her to cut it out.  To get revenge, the girl takes nude photos of the guy's girlfriend and passes them around the high school.  Terrible.  This isn't good behavior for anyone.  Maybe I am old but I think the girl who loves dinosaurs is actually kind of a bully.  Terrible ending to the story.  Terrible to even think this is an OK way to get revenge.  I don't even know how many stars to give this story now... 2 stars.

This is My Audition Monologue by Sara Zarr
This story is about a girl who is a stagehand in high school theater.  She never gets a part and really wants one.. so this story is her audition.  I do think of theater people as geeks.  3 stars

The Stars at the Finish Line by Wendy Mass
Now this was a great story.  My favorite one in the book.  It's about two teens who both want to be astronauts and got to a Star Party.  I have actually been to a star party.  So fun.  A lot of people join up and use telescopes and look in the sky for stars.  5 stars

It's Just a Jump to the Left by Libba Bray
I thought this was a decent story too.  This one is about some teens who are into Rocky Horror Picture Show.  Now I was never into that movie but my cousin was.  Now that I am older I would like to attend one of the showings where people dress up and sing along.  I liked that this story also had life lessons.. I loved this line "She cried for the way things had been, the way the would never be again."  Oh yes... the coming of age story.  5 stars 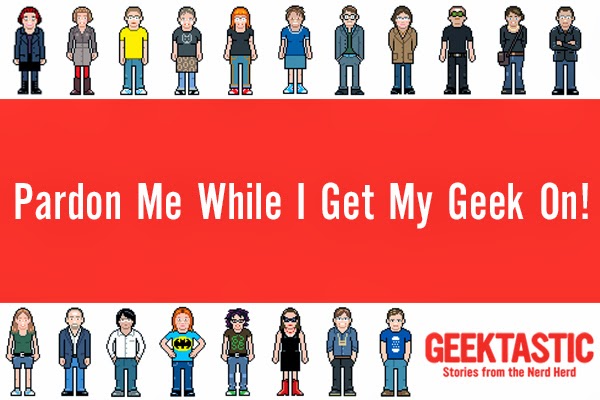 Really everyone... just pass on this book.  I just thought it wasn't the best anthology.  So now that I am done.. I pose the question to you.  What is the difference between a nerd and geek??