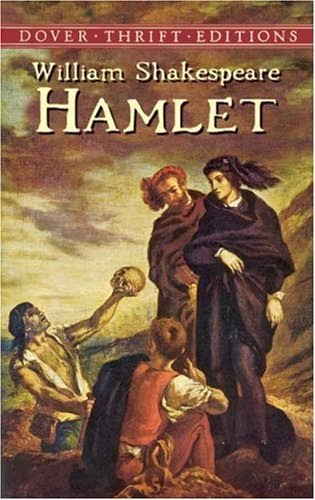 Hamlet by William Shakespeare
I finally read my first Shakespeare. Yeah!  I read it for my Project Disney The Lion King (the movie is based off this play).  Here is the goodreads description:

In this quintessential Shakespearean drama, Hamlet's halting pursuit of revenge for his father's death unfolds in a series of highly charged confrontations that climax in tragedy. Probing the depths of human feeling like few other works of art, the play is reprinted here from an authoritative British edition complete with illuminating footnotes. A selection of the Common Core State Standards Initiative

Honestly... this was a hard book to read.  It took me a little while to get in the grove of reading.  Once I picked up how the conversations were going I got a long much better.  I watched the 1996 film Hamlet (4 hours) after reading and now I wish I had read along with the film.  It uses the exact text and helps one understand more of what they are reading.  I was able though to figure out what the main plot was.   I find that it was interesting and what made it even more perfect is that it wasn't too long.  I suppose that is because I was reading a play so I am only going to read what people are going to sit there and actually watch.

I didn't go and study the story and the meanings behind it.  I simply just read it for enjoyment. I like the love... the drama... the witty text.  To finally read "to be or not to be".  Since I haven't really paid too much attention to Shakespeare novels before (except Romeo and Juliet of course) the ending was a complete surprise to me!  Shakespeare actually wasn't spoiled!  Shocker I know. I believe that (well from this play) that Hamlet should be read in one sitting.  I feel that putting it down and coming back to it later just takes away from the play feeling.  I love plays/broadway, so while reading this I was trying to read it as if I was listening to a play.

I enjoyed this even though... well let's be honest I really needed a dictionary for every sentence. I do plan on reading more Shakespeare.