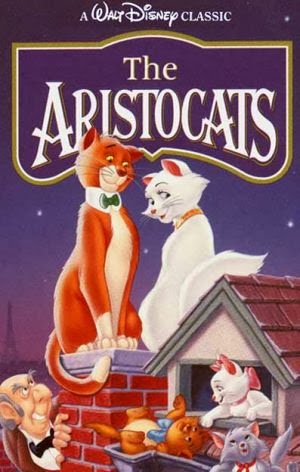 This week's Project Disney is The Aristocats based off the short story by Tom Mcgowan and Tom Rowe. It has been really hard to find the source story.  I read that it is one of the few Disney films to have an original story for the premise of the film. I can't find the story anywhere, there is information on the internet on how it all went about.  It took a few years and few rejections to get this project under way.  This was the last film to be approved by Walt Disney himself before he passed away.

The Aristocats was a movie I adored growing up.  I know all the songs and can quote along with the film.  I think a lot of people tend to forget about this film.  Yes the villain Edgar is one of the weakest villains in Disney history in my opinion.  But otherwise a good film.  He is not scary, he is not a criminal mastermind with minions.  No he is a butler who has devoted his whole life to his madam (Adelaide Bonfamille) and he discovers that she is going to leave him her fortune in her will only after he takes care of her cats.  He's afraid that he will die before this happens and so then he decides to get rid of the cats.  The odd thing about this is I guess he doesn't realize that while taking care of the cats he'd have access to the fortune anyways.. but hey some plot holes have to happen right?

Now to the kitties.  The are Duchess the mother cat, then Marie, Berlioz, and Toulouse the kittens.  I love Marie so much.  Marie thinks she is such a proper little kitten and is always telling her brothers about being a lady.  I know that some people have a problem with this and would say it's not a good example for girls that Marie is always having the men do things for her.  But I just think it's fun to be a girly girl sometimes.  Edgar takes the cats to the country sides and leaves them there. Of course Duchess doesn't know what to do and ends up meeting an alley cat name Thomas O'Malley.  O'Malley agrees to help Duchess and the kittens get back to Paris.

While heading to Paris the cats meet some fun friends of O'Malley's.  This is the part of the movie where we get to hear some wonderful jazz music.  The song "Everybody Wants to Be a Cat" is a song I still sing to this day.  So catchy. Duchess and O'Malley fall in love but Duchess decides that she needs to get back to Madame.  I think having the film take place in France is fun too.. listening to all the French accents the cats have!   Though let's be honest.  Why are there American jazz artists in France in 1910? The film has a lot of plot holes but if you just watch it for the cats you will be fine. Eventually the cats do make it back to their house and of course O'Malley is accepted into the family.

I am sorry I didn't have the story to compare the film to it this time around in Project Disney.  I think there will be a few more films coming up with original stores where it will be the same situation (Lilo and Stitch I think is one).

Be sure to check out my other Project Disney:
Snow White
Cinderella
Peter Pan
Treasure Planet
Sleeping Beauty
The Great Mouse Detective
The Hunchback of Notre Dame
The Princess and the Frog
Pinocchio
Fantasia
Beauty and the Beast
Lady and the Tramp
Alice in Wonderland
The Rescuers
The Rescuers Down Under
Tangled
Oliver and Company
Mulan
The Little Mermaid
Bambi
101 Dalmatians
Frozen
Fantasia 2000
The Jungle Book
The Emperor's New Groove
The Sword in the Stone
Aladdin
Atlantis
The Lion King
The Many Adventures of Winnie the Pooh
Winnie the Pooh (2011)
Robin Hood
Hercules
Pocahontas
Dumbo
The Black Cauldron
Mary Poppins
Lilo and Stitch
The Adventures of Ichabod and Mr. Toad
Make Mine Music
Tarzan
Fox and the Hound
Melody Time
Posted by Angela's Anxious Life at Friday, March 07, 2014