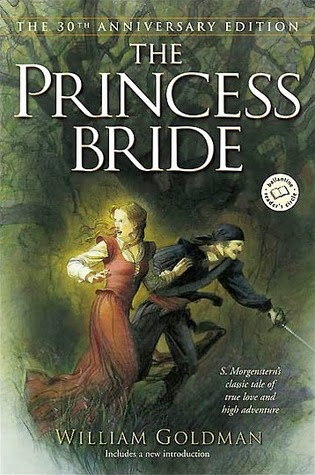 The Princess Bride by William Goldman

I have finally read The Princess Bride!  I have always loved this movie and wanted to read the book.  This month my Young Adult book Club is reading it for our book club pick. Nominating classic books was crazy in the group.  The reaction from the teens in the group about reading classics was astounding.  No one seemed to want to.   Here is the goodreads description:

What happens when the most beautiful girl in the world marries the handsomest prince of all time and he turns out to be...well...a lot less than the man of her dreams? As a boy, William Goldman claims, he loved to hear his father read the S. Morgenstern classic, The Princess Bride. But as a grown-up he discovered that the boring parts were left out of good old Dad's recitation, and only the "good parts" reached his ears. Now Goldman does Dad one better. He's reconstructed the "Good Parts Version" to delight wise kids and wide-eyed grownups everywhere. What's it about? Fencing. Fighting. True Love. Strong Hate. Harsh Revenge. A Few Giants. Lots of Bad Men. Lots of Good Men. Five or Six Beautiful Women. Beasties Monstrous and Gentle. Some Swell Escapes and Captures. Death, Lies, Truth, Miracles, and a Little Sex. In short, it's about everything

The Princess Bride was only a so-so book to me.  The book does have some fun parts.. fencing, rhyming, torture, giants, true love, poison, miracles, spiders,  and soooo much more.  It is the perfect fantasy! It is written in a way I didn't enjoy so much.  At first I read the two introductions in the edition I was reading (the 30th I think) and was confused.  I finally looked up the book and it's written kind of like a book within a book.  The main narrator has re-written a book that some other fictional author wrote (all fake).  This narrator does try to be funny but it just wasn't my sense of humor.  Honestly if the book was only the Princess Bride parts I would've enjoyed it more.  The real title of this book is: The Princess Bride: S. Morgenstern's Classic Tale of True Love and High Adventure: The "Good Parts" Version Abridged by William Goldman.  So as you can see this is the story within the story.

The story parts in the novel are almost exactly like in the movie.  This is because the author of the book also wrote the screenplay for the movie. My husband loves this movie so much!  He is always watching it.  In this instance (and I never say this) I enjoyed the movie better then the book.  The book does give us the back story of each character (Inigo, Fezzik, and Vizzini) which I did enjoy that part.  We learn how the three assassins end up together and really I just love Inigo even more now.

There is another story in this book called Buttercup's Baby.  Honestly I didn't bother to read it. It's the first chapter of the sequel. There was another long introduction to it and yet again I was a little confused. It's a made up introduction stating that Morgenstern's family is suing William Goldman and won't let him do a sequel.  I googled it and really Goldman doesn't know what to make the sequel about. There is also information that the sequel  involves how Stephen King was actually going to do the abridgement, but left it up to Goldman. I guess I just don't get these introductions. I also looked this up and King says it's not true.  I don't know confusing.

Really though the story itself is great!  A wonderful woman... what woman wouldn't want Wesley coming and saving them no matter what!  Even after the Machine.  I wouldn't read this again but I am glad I read it at least once.  The movie though is a classic!