This week I've read Jack of Fables Vol 1 in the Fables series,  Oz: Dorothy and the Wizard in Oz by Marvel which is the 4th book in the series,  Catwoman Volume 1 from DC the New 52, 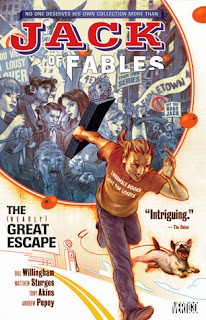 Let's start by talking about Jack of Fables Volume 1 written by Bill Willingham .  I am reading this because I got to volume 13 of the main arc of the Fables series called the great crossover which is where that series and the Jack series mix story lines.  Jack was in the Fables series at the very beginning and then branched off into his own series.. I had put off reading them but then when the series crossed over I figured I better go back and read the Jack of Fables series. I really enjoyed this series... Jack is a crazy character.  Totally bachelor and just all around playboy.  This series also looks like it is going to take place more in the literary world rather then just the fairytale world like the main Fable arc.  Love it! 5 stars! 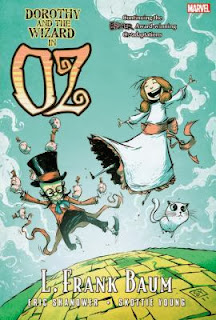 Next up is Oz: Dorothy and the Wizard in Oz.  This is the 4th graphic novel in the Marvel Wizard of Oz series written by Eric Shanower Artist Skottie Young.  I didn't really love this comic.  Well it's wasn't the comic I suppose.  I just didn't enjoy this story of Oz.  There is a neat little 2 page explanation at the beginning of each volume and Shanower did say in it that people who are fans of Oz believe this to be Baum's darkest book.  I can see why.  It is just a little spooky and odd.  Invisible people, wooden city, glass city full of vegetable people. Plus it seems like everyone is out to kill Dorothy and her friends in this one.  The art is still fantastic and very Dr. Seuss style! 3 stars 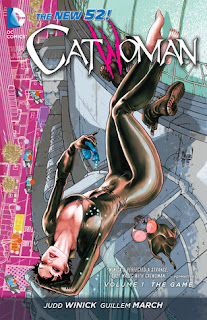 I also read Catwoman Volume 1 from the new 52 by Judd Winick.  Wow is all I can say.  When I first started to read it I wasn't sure if I was going to like it.  The art style is a little... off from what I like.  But then as I read on I could feel what the characters were feeling through the art. I felt that Catwoman looked older then what I though, though she does state her age in the comic as 23.  Then the story takes off!  I mean she gets hot and steamy with Batman (who I might add is in a lot of the comic), her crime sprees are exciting to read about.  I love to see her as a real person.. it's just great!You feel everything that Selina (her real name) feels.  Greed, sympathy, the want to be noticed, love... everything. If you read about this comic when it first came out, there was a lot of controversy about her boobs... and her intimate relationship with Batman.  People are saying this kind of stuff is written for boys.. well I am a girl and I loved it to be honest.   Now let's look at the goods shall we?? 5 stars 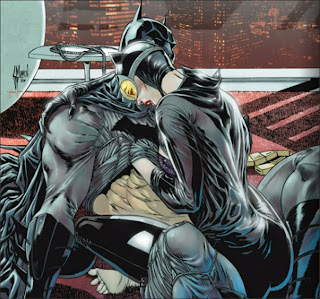 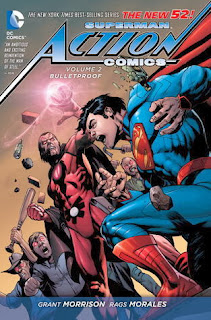 Last we'll talk about Action Comics Superman Volume 2. What a mess. I mean... what is even going on? It's like they take a bunch of different comics and just mix them into one book. I have no idea what was going on. I like the look of Superman in this comic but that's about it.This comic goes from killing off superman's secret identity to not doing it and making people forget it happened, to an alternate universe ... not continuing that alternate universe ...there is an odd character named Adam who would be a pretty cool character if the comic would've just followed that story line.  I just didn't get it.  Will I read volume three???  Nah...  1 star


Well that's it for comics this time around... can't wait to read what comics come into the library next!!
Posted by Angela's Anxious Life at Tuesday, January 07, 2014