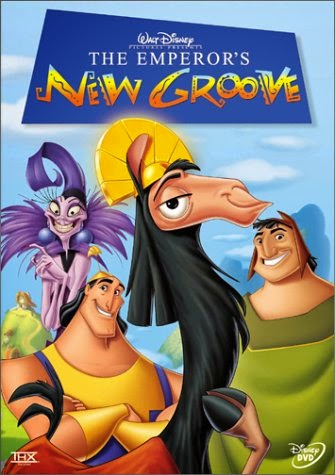 This week's Project Disney is The Emperor's New Groove based off the story The Emperor's New Clothes by Hans Christian Andersen.  Personally I really think the book vs movie are totally different.  The story follows a greedy emperor who is obsessed with his looks rather then the Kingdom. Two crooks come to the kingdom and tell the emperor that they have magic fabric that only the wisest and those who belong in their profession can see it. In reality, there is no fabric.  They trick the kingdom into giving them the finest materials that they hide.  The emperor hires the men on the spot.  These men work day and night pretending to make a fabulous ensemble for him.  The emperor sends servants to look in at the robes ... all come back and say that it is beautiful.  Eventually the King goes to see it and doesn't want others to know he can't see it either so he proclaims it's beautiful too.  He goes on a procession through the city where all the townspeople also declare his robes are magnificent, they don't want the King to think they aren't wise.  A child finally yells out that he has no clothes on... all the people then begin to say it.  The King finishes the procession though since he is already walking. Read Emperor's New Clothes here! 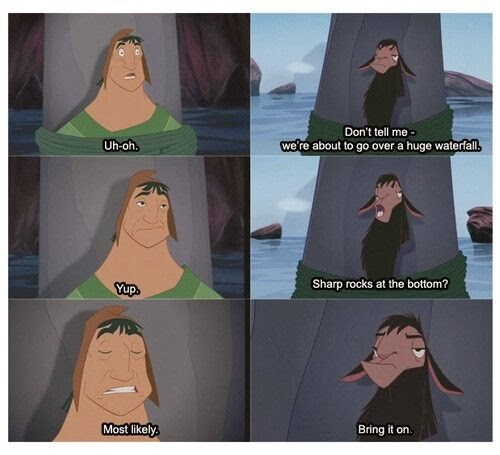 As for the movie... we start out with a young emperor Kuzco.  He is hilarious!  He wants to build himself a pool on some land that is already lived on by some peasants.  So he calls Pacha to court to tell him he is going to tear down his neighborhood for the pool.  Of course Pacha is upset by this.  At the beginning of the film Kuzco also fires his adviser Yzma (and her assistant Kronk) for trying to run the country for him.  Yzma gets revenge by having Kronk poison Kuzco, but this goes wrong because isn't of killing him the poison transforms him into a LLAMA! Now she can control the Kingdom.

This film doesn't have a lot of musical numbers, and that is just fine with me.  It is more of humor.  I mean... I laugh through this entire movie.  Kuzco (as a llama) is dumped into Pacha's village by Kronk.  Pacha and Kuzco become unlikely allies (since Kuzco was going to destroy his house) and start off on some fun adventures together.   Pacha makes a deal with Kuzco who says he won't build his pool if Pacha takes him back to the castle.  Kronk reveals to Yzma that he never killed Kuzco so they go out on a mission to find him.  While trying to go their different ways both sets of characters actually end up meeting at a cafe in the jungle and a hilarious tirade happens where they keep passing by each other.

The characters all end up back at the castle where everyone is in the science lab trying to the remedy to Kuzco being a llama. Yzma give Kronk a knife to kill Kuzco but his conscious pops up (and angel and devil) and the three of them discuss the situation.  Kronk switches sides so Yzma drops him down into a pit. Kuzco grabs a bunch of potions and keep drinking them trying to find the right one to get him human again.  He then only has two vials left, Yzma grabs ones and drinks it but becomes a kitten.  Kuzco drinks the other and becomes a human again.  He eventually builds a little hut next to Pacha's.

I think that really the only similarities between the film and the book is that fact that the emperors are both very egotistical at the beginning of the story.  The both really only care about their looks and happiness above the kingdom.  There is no invisible clothes but instead a Llama face instead! I love love this movie though.  Frankly it is so funny.  I think this movie needs way more love.  Maybe it's just right up my alley for humor. Plus Yzma as the villain= perfect.  I should mention that Pasha's family is in the movie too and they are fun.  The voice casting for this movie is spot on also.

Be sure to check out my other Project Disney!  Half way to the end.
Snow White
Cinderella
Peter Pan
Treasure Planet
Sleeping Beauty
The Great Mouse Detective
The Hunchback of Notre Dame
The Princess and the Frog
Pinocchio
Fantasia
Beauty and the Beast
Lady and the Tramp
Alice in Wonderland
The Rescuers
The Rescuers Down Under
Tangled
Oliver and Company
Mulan
The Little Mermaid
Bambi
101 Dalmatians
Frozen
Fantasia 2000
The Jungle Book
The Sword in the Stone
Aladdin

Atlantis
The Aristocats
The Lion King
The Many Adventures of Winnie the Pooh
Winnie the Pooh (2011)
Robin Hood
Hercules
Pocahontas
Dumbo
The Black Cauldron
Mary Poppins
Lilo and Stitch
The Adventures of Ichabod and Mr. Toad
Make Mine Music
Tarzan
Fox and the Hound
Melody Time
Posted by Angela's Anxious Life at Friday, January 10, 2014